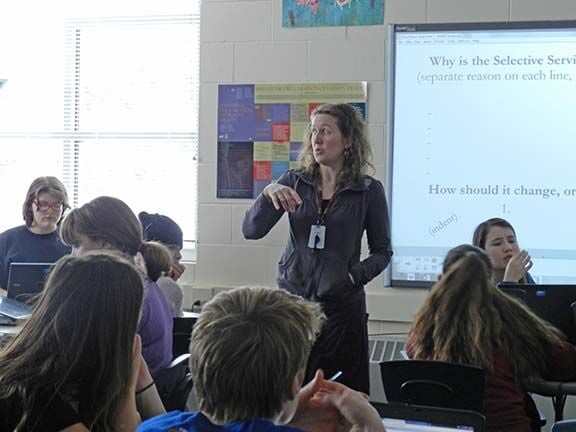 Myla Lilijemark in the classroom. 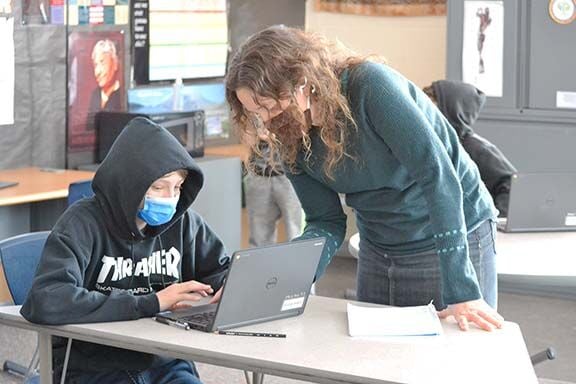 Myla Lilijemark works with a student in the classroom. 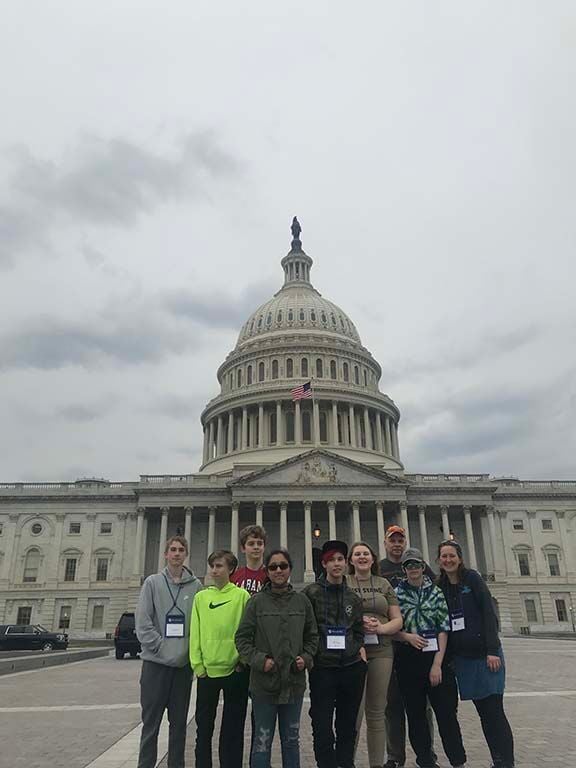 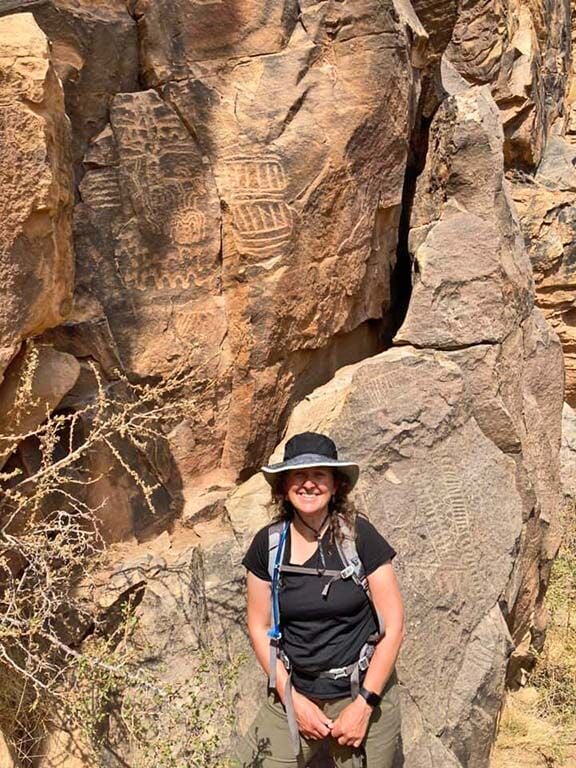 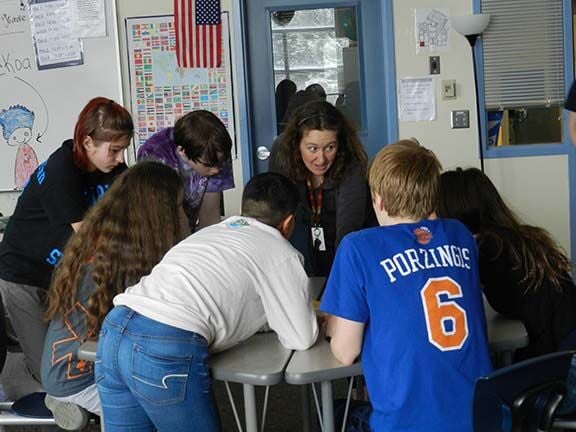 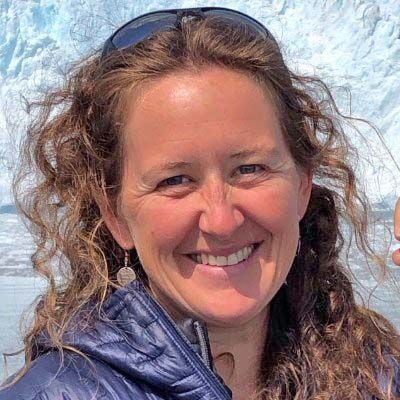 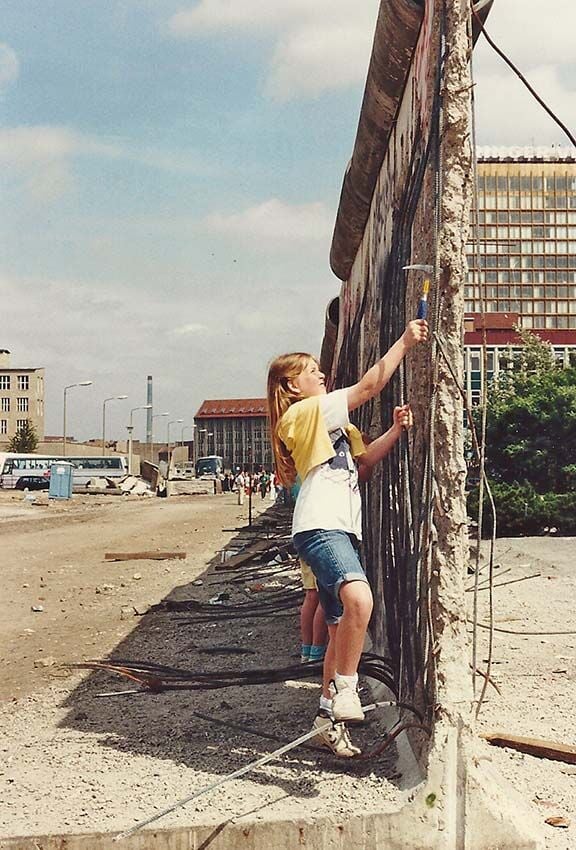 Myla Lilijemark started her interest in history early when she had an opportunity to chip away a part of the Berlin Wall at age 11.

Myla Lilijemark in the classroom.

Myla Lilijemark works with a student in the classroom.

Seward Middle School’s Myla Liljemark has been selected as Alaska’s History Teacher of the Year. Presented annually by the Gilder Lehrman Institute of American History, the honor is bestowed upon one history teacher from each state from a nationwide total of 8,510 nominees. Ten finalists are then chosen, to be determined this fall. From the finalists, one teacher will be selected as the 2021 History Teacher of the Year, an award highlighting the crucial importance of history education by honoring exceptional American history teachers from elementary school through high school.

Liljemark, now embarking on her seventeenth year teaching on the Kenai Peninsula, spent two years at Seward High School before moving to Seward Middle School to teach seventh and eighth grades. An Oregon native, Liljemark moved with her family to West Germany from ages 11 to 18, witnessing the fall of the Berlin Wall. She later went on to obtain a Bachelor’s Degree in History from Humboldt State University in Arcata, California and a Master’s in Secondary Education, Social Studies from the University of St. Thomas in Minneapolis, Minnesota. She credits her international upbringing with shaping her worldview and her approach to teaching.

“One of the things that helps drive this neutral approach to history is, there’s a group of people in the world that are called Third Culture Kids or TCKs, and these are people who spent formative years of their lives living outside of their home culture, and they come back,” she said. “They are thinking in two languages. TCKs also see the world a little bit differently, and we grow up to be adult TCKs or ATCKs… Having been exposed to lots of different cultures in a long period of time, it really had an influence on the approaches that I take in the class.”

Liljemark met her husband in Germany, and the couple eventually moved to Seward, where she admits they initially never intended to stay beyond a few years.

“My plan was to get two years of experience teaching up here and then to head overseas,” she said. “Our rule is, we stay in a place until we don’t regret leaving, and we are still here in Alaska 16 years later because we know that we’d regret leaving if we ever left, and so now we’re raising our kids here.”

Liljemark currently teaches two alternating history courses, rotating yearly between US History and Ancient World History. She also teaches exploratory classes in guitar and ukulele, as well as classes in health, yearbook, and debate, in addition to coaching soccer. Over the years, Liljemark has developed a teaching style characterized by two major principles: a global perspective and a focus on making history relevant to her students.

“They’re kind of, in a sense, the center of their own worlds,” she said. “They’re going through so many changes. To try to be a history teacher and help them understand that something that happened 5,000 years ago is important to their world is to me the challenge that teachers can be looking at, the avenues to really helping kids get engaged.”

“They’re not just ancient people who lived a long time ago,” she said. “They’re people who have a lot of the same needs that we have today, and satisfied those needs through technological advances similar to the ones that we continue to use today, and if kids can learn to recognize those, then they become a part of that experience.”

Another hallmark of Liljemark’s teaching style is a commitment to impart lessons without passing judgment, either on the various points of view expressed by her students or on the material itself.

“Each student that comes into your class is going to have a different perspective, and it’s never my intention to ever alienate any of them,” she said. “I want them to come in, and we’ll learn about it, and they can process it on their own based on the facts that they see, their interpretation of those events, their interpretation of those facts. That’s the role that a history teacher should take.”

Notable in her promotion of global perspectives, in 2017 Liljemark participated in an international teacher exchange program where she taught in Australia for a full year while an Australian teacher taught in Seward.

“My husband and I were able to get our kids living overseas,” she said, “but also bring the gift of an Australian family to our small town, so that my students were able to, not just learn about the world through lessons, but to actually have someone from another country in the classroom every day, exposing them to new approaches to understanding their world.”

In 2019 Liljemark was chosen as an NEA Foundation Global Fellow, which afforded her a trip to South Africa that further broadened her worldview, exposing her to a country attempting to move forward in the wake of its troubled past.

“It was incredible poverty, but they were so rich in culture, and they’re genuinely happy to see us,” she said, “and watching them as communities was really interesting, to watch how they interacted with each other. It was super-complicated. It’s a really complicated place.”

In addition to her teaching post, Liljemark serves on the board of the Alaska Council for the Social Studies, and this year she has also been selected to serve on the Teacher Advisory Council for the National Humanities Center, promoting humanities education. Yet amid all her accolades, accomplishments, experiences, and responsibilities, Liljemark retains a laser focus on one guiding principle: enriching the lives of her students, applying the information they learn about the past in a manner relevant to building a better future.

“My job is to give them all the tools within the seventh and eighth grade year,” she said, “so that when they go to high school, they can have those conversations at a deeper and more meaningful and more respectful level.”