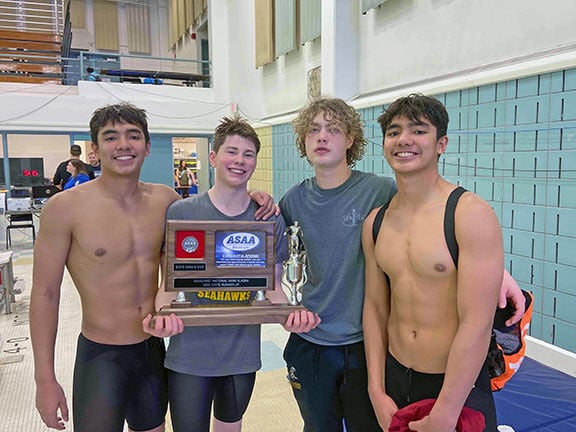 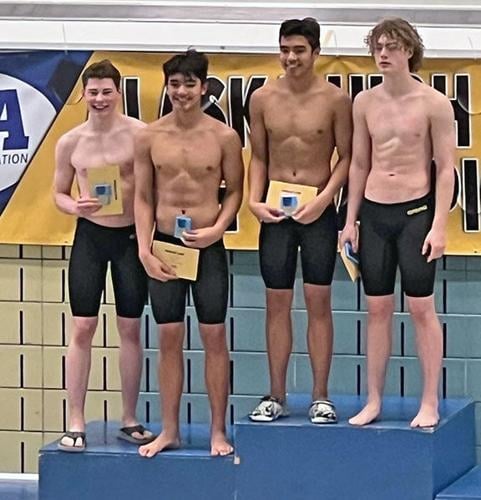 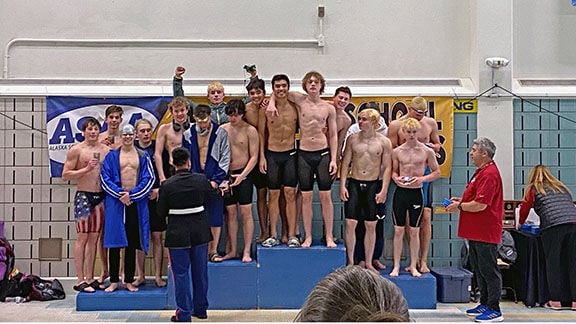 (top tier, left to right) Nick and Ben Ambrosiani, Paxton Hill and Jackson Bird top the podium after their 4x50 relay win at the state championships in Anchorage.

(top tier, left to right) Nick and Ben Ambrosiani, Paxton Hill and Jackson Bird top the podium after their 4x50 relay win at the state championships in Anchorage.

For the first time in the history of Seward High School, the Seahawk boys swim team has closed the season as co-runners-up to the state champions, an honor shared with Eagle River High School. Earned at the 2022 state championship swim meet at Bartlett High School in Anchorage on Saturday, the team’s historic accomplishment serves as a capstone to a season that earlier saw a regional championship win and a bevy of broken school records.

“I didn’t even think it was possible, to be honest,” said Coach Solomon D’Amico. “It was such a blown-out scene, competitively, that it was not even something that was worth wasting time thinking about.”

Only twice in school history has Seward achieved a similar feat in any sport — 1950 and 1961, when the Seahawk basketball team took runner-up before the onset of school enrollment classification limited the scope of their competition. Adding 2022 as another historic year, seniors Jackson Bird and Paxton Hill, and juniors Nick and Ben Ambrosiani all returned to shatter school relay records, earning a state win in the 200-yard freestyle relay, with a close second in the 400-yard freestyle relay as the icing on this season’s cake.

In addition to the relays, each member of the team turned in top performances in their individual events. Senior Jackson Bird represented the team in the 100-yard breaststroke to finish ninth in the preliminaries, with a time of 1:03.57, within 14 hundredths of a second of his region championship time. In finishing ninth, Bird just missed qualifying for finals, but Coach Solomon D’Amico said Bird’s placement reflected more on the level of state competition than on his performance.

“It was a really solid swim,” D’Amico said. “It was really good. There was a few other guys that were really on that day, and that’s just the way it goes sometimes.”

With the previous week’s 1:03.43 having earned him a regional gold in the event, Bird saw a four-second improvement over his season-opening best of 1:07.48.

“His last few weeks leading into regions, that was a really special part of our season, seeing him lock in there and pin his ears back and race to win, not just race for a good time,” D’Amico said. “He really showed poise in those moments.”

Senior Paxton Hill, swimming the 100-yard butterfly, was seeded sixth in the preliminaries with a previous best of 53.76, his region championship winning time. In the preliminaries, Hill swam a 53.86, and his finals time of 54.01 earned him a fifth-place finish and four points for the Seahawks overall. The time also marks a 3.5 second improvement over Hill’s season-opening best.

“That sees him go from a state qualifier in this event and not getting out of prelims last year—he was a 57.31 — to, not just a finalist but a finalist who advanced in place,” D’Amico said. “He took on the role of senior captain along with Jackson this year, and a lot of times he was our bellwether, so to speak. He would set the mood, tone-wise, and performance would follow.”

Swimming the 50-yard freestyle, junior Nick Ambrosiani moved up in the preliminaries from his initial eighth seed, from his 22:69 pre-meet best, to a finals start at seventh from his 22.45 prelim swim.

“I felt pretty lucky just being there to compete at finals,” he said. “I made seventh seed, so I kind of barely got in, but I still did it.”

In the finals, Ambrosiani held his seventh spot with a marginally faster 22.43.

“Swimming at finals, I remember I was a little tired from the medley,” he said, “but I dove in and I gave it my all.”

Ambrosiani’s finals time earned the team two points toward their overall score and represents a 1.74 drop in his personal best from the start of the season.

“It’s pretty significant for the fastest event,” Coach D’Amico said. “To finish seventh overall as a junior was really special, and impressive to see that come to fruition for him.”

Nick’s twin brother and fellow junior Ben Ambrosiani came into the 100-yard freestyle event seeded ninth with a pre-meet best of 49.64, which had earned him third place at regions the week prior. In the state preliminaries, Ben cut a half second from that time for 49.05.

In finals, Ben swam a 48.71, breaking the 49-second barrier for a fourth-place podium finish, earning five points for his team.

“I was going in with the mentality of playing with the house’s money,” he said. “I didn’t really have any expectations after prelims. I didn’t really expect to get fourth, but I was just throwing everything I had out there, and that’s what ended up happening.”

“He got to beat the two guys that were dominating the region all year,” said Coach D’Amico. “These seniors from Colony and Cordova finished fifth and sixth. I’m really happy for Ben to finally track both those guys down and earn points with our highest individual finish, and a podium at that. It was pretty epic!”

Ambrosiani’s finals time marks over five seconds off his preseason best of 54.21, but his new personal best was still to come in the relays. First up was the 200-yard medley relay, which was bookended by Ambrosianis, with Ben swimming a 26.54 backstroke for first leg and Nick swimming freestyle 21.62 on the anchor. Jackson Bird swam a 28.09 breaststroke for the second leg and Paxton Hill swam a 23.88 butterfly for the third.

“I saw Paxton coming in to the wall and dove in and tried to move my arms really fast,” said Nick Ambrosiani of his only anchor leg of the meet. “That was the first time I went sub-22, and I think a big part of that was because it’s easier to try harder when you’re swimming for something. I was swimming for my team, for my other three dudes in that relay, so I was giving it everything I had.”

The team’s fifth-place finish time of 1:40.13 earned them eight points, marked a new season best and broke the previous school record they had set a week prior.

“Last year we closed with our fastest performance of the year at the region championship meet,” said Coach D’Amico. “The fastest these same four guys were was 1:47.05. They dropped it all the way down seven seconds, in the seven percent range.”

“Service’s first leg was Benjamin Price,” Ben Ambrosiani said. “He got a little lead in front of me, and then I remember Nick, the next leg, he caught up some time on Service’s second swimmer. Then Jackson held that, then Paxton held it, and then right at the end it looked basically tied.”

In a photo finish, a mere seven hundredths of a second kept the team from first place, but their 3:15.37 second place earned them 14 points and set a new school record.

“They lopped off a huge chunk of time on the school record they had broken six or seven times on the year,” said Coach D’Amico. “Last year they finished the season as region champs at a 3:35.90, so that’s a little over 20 seconds improvement, season-to-season.”

The big win for the Seahawks came in the 200-yard freestyle relay. With a top seed time of 1:30.26 from prelims, the team was poised for victory.

“We were really trying to think about maybe taking one or two of our underwater dolphins off in the opening 25, from the blocks, so that we could have an additional one or two dolphins on the return trip,” D’Amico said, “which would allow us to get under the field’s wake and also help us create that wake into the two adjacent lanes. I think that really helped us out.”

“That’s going to go down as his fastest time, ever,” D’Amico said. “He gets to the exchange, and Nick and him have a pretty good chemistry for some obvious reasons, in timing their exchange there.”

Nick Ambrosiani’s clean exchange helped to bring him in at 21.73. Jackson Bird then took the third leg, with a 22.21.

“He had such a good exchange and such a good breakout with a big extension of his initial breakout, just about to the max he could do, the 15-yard mark,” said Coach D’Amico. “He got under the wake both times, off the block and off the wall.”

Swimming the anchor was Paxton Hill, with a 22.50, bringing in the win at 1:28.64, which earned the team 18 points and set yet another school record.

“To have a strategy and to execute that strategy in that high stakes moment, that should be considered the most special performance of the meet for our guys,” said the coach. “Those relays were really a fun rallying point for us and helped us coalesce as a team and understand at a deeper level what it means to invest and sacrifice in each other, for each other, to pull off some epic performances,”

At the end of the meet, when it was announced that the team had tied with Eagle River for runners-up to state champions Robert Service High School, the team was in disbelief.

“That’ll go down as a major highlight for me, through my modest coaching career,” D’Amico said. “To see us come through and get second, every other team in that top ten was a AAAA school. That was very special and legendary, to be honest.”

In recognition for their contributions to the success of the team, Coach D’Amico went on to thank Hertz car rentals for transportation support; all team parents for their varied contributions throughout the season; Lydia Jacoby and Connor Spanos for their mentorship; Greer Etheridge, Abbie Fish, Nic Fink and Melanie Margalis for their Tsunami Swim Camp participation; Myriah Ariza-Dalter for coaching contributions; Coach Meghan O’Leary for her many years of building the swim program; and Leslie Jacoby for all the roles she has played throughout the season.

“She’s been nothing short of phenomenal,” D’Amico said. “She’s just such a huge source of support for our team, helped us every step of the way.”

The coach went on to extend a special thanks to the officials in both home and away meets.

“We really appreciate the sacrifice they make in going through their training so they can have a front row center spot to see the action unfold,” he said. “We’re always looking for people looking to become officials. If anybody’s interested, they can certainly reach out to our club.”

At its first regular session of the month on Monday, the City Council will recognize the Seahawks for their regional victory and second-place state finish. It will also recognize Coach Solomon D’Amico for his service and dedication to the team throughout the years. Though the 2022 Seahawk swim season has now drawn to a close, the Tsunami Swim Club season, open to swimmers of all ages, will resume on Monday, Nov. 14. For more information on joining, visit teamunify.com/team/akstsc/page/home.