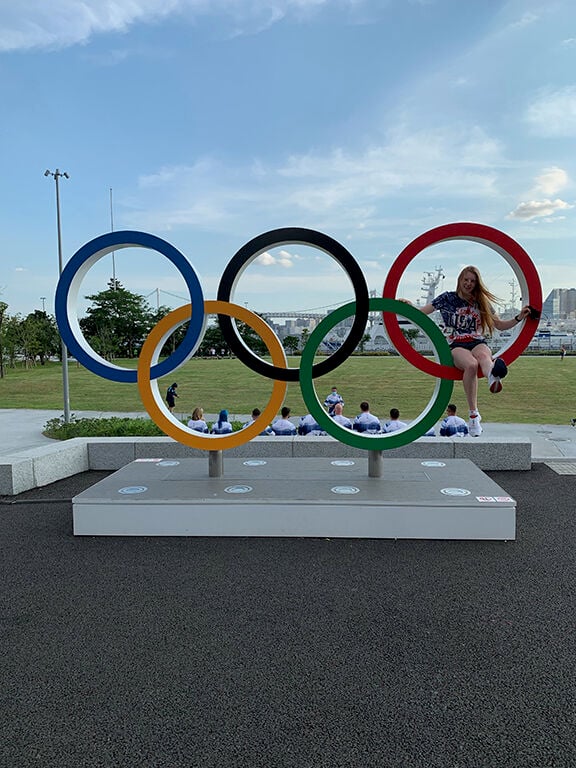 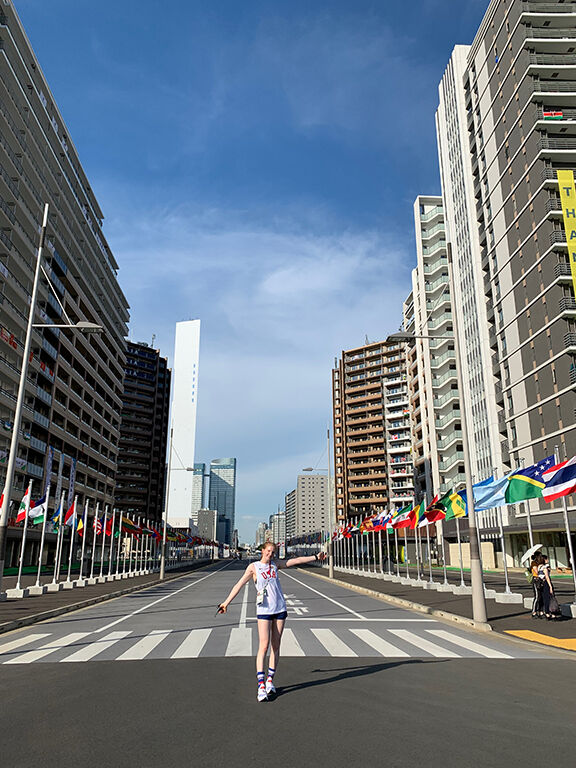 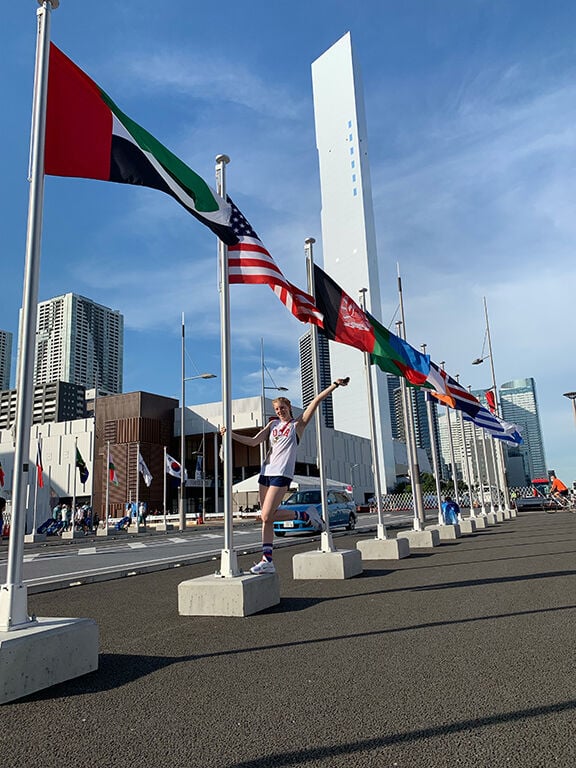 “Team USA had a big snack and nutrition room for all the Team USA athletes,” Jacoby said. “You could just go in there, sit on the couches and meet people, have snacks, food that they had in there that we’re more used to at home. Same thing, the swim team had one that was just for our team that we could use, and we had a nutritionist and all that, so there were lots of resources for us.”

All trained up and well-fed, Jacoby was then ready to fulfill her purpose in Tokyo: a gold medal in the 100m breaststroke for Team USA. Lining up next to South African favorite Tatjana Schoenmaker, who had bested her in the preliminaries, Jacoby remained confident in her abilities, having just won her semifinal heat with a time of 1:05.72. The starter sounded, the swimmers were off, and after touching the back wall, Jacoby made her gold-winning move.

“You kind of have this sort of sixth sense of where they are, where people are in the pool,” she said. “I knew coming off the wall that I was right with them, right where I needed to be, and that I could close faster, so I felt very confident coming home. I knew I was going fast. I didn’t know exactly how fast they were going. To look back and see that clock and have that confirmation that that number one was next to my name was absolutely incredible.”

Her outstanding gold-winning 1:04.95 time propelled Jacoby into the history books and into instant superstardom. The media storm that immediately followed her victory allowed her precious little time to process the events of the day.

“The day that I swam is honestly kind of a blur,” she said. “I went and did several press conferences and about six hours of media that day — Today Show, Access Hollywood, Twitch — a bunch of different reporters from all around the world. Just going through that in a daze was definitely interesting. I wouldn’t say that there’s one particular moment that really stands out to me, but just the whole thing, people’s constant interest in hearing about me and what I’m doing and wanting to talk to me has definitely been a big shift, and it’s been pretty crazy for sure.”

Having conquered the pool at 11:30 that morning, Jacoby was not released from the ensuing media whirlwind until after 9 p.m. Yet her next challenge awaited only a few days later. An event that made its Olympic debut in Tokyo this year, the 4x100m Mixed Medley Relay pits teams of four swimmers, two men and two women, against their fellow swimmers in a race featuring four swimming styles. Jacoby was honored to represent Team USA in the breaststroke leg of the race’s historic inaugural outing.

“That was a big moment, especially for me, but for all of Team USA,” she said. “You really have a lot of people that you’re swimming for, not just yourself. To be put on that relay and have that honor is a big deal.”

But when she entered the water, Jacoby’s goggles fell from her eyes and covered her mouth, where they would remain throughout the race.

“When my goggles fell off, I was absolutely shocked,” she said. “In that moment I was absolutely panicking in my head, and I knew I had to keep going. I knew I had to pull through for my team, and so I think that time was all just adrenaline. I had no idea how fast I was going because I couldn’t really see, couldn’t really breathe, so I was just going off of memory and feel.”

In spite of her equipment malfunction, Jacoby rallied, ultimately clocking her second-best time to date, a formidable 1:05.09, just .14 seconds shy of her gold time. No sooner had the race ended than Jacoby had now to prepare for another race, the Women’s 4x100m Relay the following day. She was determined not to fall victim to another goggle mishap.

“With the goggle thing that had happened the day before, that kind of added a new thing to think about that I never had to think about before, so that was definitely a little scary,” she said. “I changed up the way that I put on my caps. I tightened my goggles. I pushed them into my eyes so hard, my eyes were like bulging out.”

In what would prove to be the most exciting race of the three, Jacoby went on to help Team USA win a silver medal with a 3:51.73 time that trailed gold-winning Australia by only .13 seconds and shattered the previous record of 3:52.02, set in 2012.

“We were just watching the clock on the last couple legs, and both teams were under the Olympic record,” Jacoby said. “Just to have placed so high and that we were so close, because we got second by .1 seconds. It was great, an exciting race. That was probably my favorite one of the whole meet.”

At just 17 years old, Lydia Jacoby had added a silver medal to the gold she’d won only days earlier. Though she treasured both awards, she admitted the relay’s silver held a special significance for having been a team effort.

“The relays come with a lot more pressure and responsibility than individual events, and they also come with a lot more pride,” she said. “Obviously I can’t even express how proud I am of my gold medal, but to have done that beside that team and to have that be the moment where we transformed from rookies to veterans, and just to have done that beside that group of people was a big moment.”

Having thus turned in three stellar performances, Jacoby then boarded a plane for home, unable to attend the closing Olympic ceremonies due to COVID precautions. Shortly after her return, she was honored with a parade that drew throngs of both citizens and tourists, coming out to share in her hard-won victories and show their appreciation for all the inspiration she provided. Initially taken aback by the city’s overwhelming show of support, Jacoby admittedly had to adjust to the extra attention.

“I’m going to be honest — it was pretty weird,” she said. “I don’t really like being the center of attention. I never really have, so that’s definitely not something I’m super-comfortable with, that particular way, but it was really amazing to see all the community support. When I went back to get on the float, there were so many people on other floats in the parade, I was like, ‘Oh, we’re just going to be parading around town and everybody will be in the parade,’ so it was funny when we turned the corner to see how many people had showed up.”

Yet the challenges of her newfound notoriety have not abated with the fading of the initial fanfare. Jacoby noted that her pre-Olympic relative anonymity seems now to be a thing of the past.

“Even just going out to get a coffee with my friends, I have to mentally prepare for people I don’t know to come up to me, ask for pictures, ask for autographs, ask to talk to me,” she said. “Just getting used to that public recognition has definitely been weird, especially in such a small town, buy it’s all a positive thing. I know people are super-excited for me, but being a pretty private person, it’s definitely been a big change.”

But she ultimately welcomes the community support, stating it’s all worth it if she can be an inspiration to any of her fellow Tsunami Swim Club members, anyone in Seward, in Alaska or beyond, who may be aspiring to greatness.

“My whole story I hope can be an inspiration to kids across the country, but especially kids in my club,” she said. “Coming from a small town, particularly Seward, just knowing that there’s so much community support with what you’re doing, so many people who want to help you and see you succeed, that it really is possible to do anything you want.”

Now with an Olympic gold medal and a silver already under her belt, national recognition, and a place among the greatest swimmers ever to enter the pool, what lies ahead for Lydia Jacoby? Hopefully, she says, a return to normalcy.

“Now that school’s starting back up and everything, I’m starting to get back into a bit of a routine,” she said. “The initial craziness has died down, but there’s still a whole lot to do, and lots of people to talk to. It’s definitely still crazy but getting back to somewhat normal, at least the new normal.”

As she embarks on her senior year of high school, Jacoby will be taking art classes, photography classes, several classes to prepare her for her college major, and she also hopes to further pursue music and other hobbies she put on hold in pursuit of her dreams.

“For the last few years I’ve been very focused on swimming,” she said. “I often miss out on social things with my friends or other sports I might want to play. That’s always been tough, but it’s a decision that you have to make when you’re dedicated to your sport. Obviously I was doing something amazing. I’m so grateful for that experience, but it was also a bummer to be missing the summer of my junior year with my best friends at home. There’s always stuff that you have to give up. That’s the case for anything that you ever do in life. It’s all positive stuff, but I’m very happy with how I’ve been able to balance it.”

Lydia Jacoby has now begun her senior year at Seward High. In one year she will join the world class University of Texas swimming program. Looming in 2024, the Olympic pool has already begun to beckon Jacoby to Paris, but until then, she will live out the remainder of her senior year an entirely normal — yet entirely exceptional — Seward teen.

“I’ll definitely be getting back on the grind here soon,” she said, “but also taking time to enjoy my last year of high school outside the pool.”