A concept drawing of the proposed USS Alaska monument. 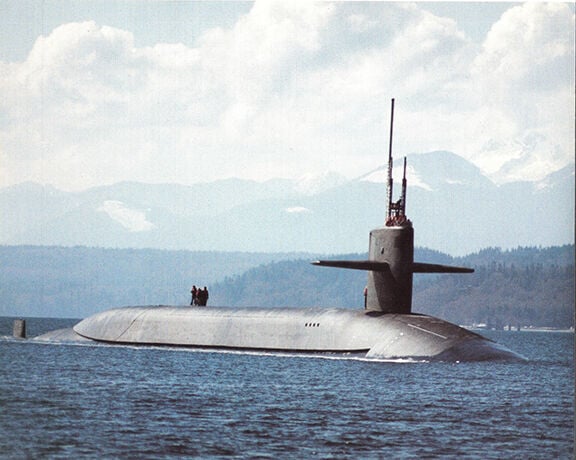 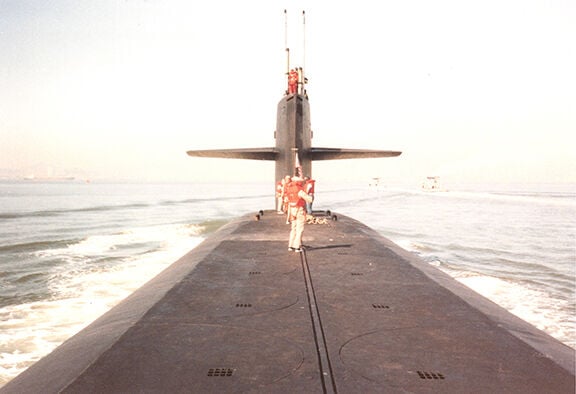 Topside on the USS Alaska.

A concept drawing of the proposed USS Alaska monument.

Topside on the USS Alaska.

Plans are underway to bring a naval monument to Seward that may one day prove as iconic as the SeaLife Center or Mt. Marathon race. Organizers are currently in the early stages of securing funds to erect a monument to the Ohio-class Trident submarine USS Alaska (SSBN 732) near the city’s shoreline, with a connected military museum recreating several rooms within the vessel, among other exhibits.

Plans for the monument include a life-size steel reproduction of the top of the submarine, which will rise from the ground as it would appear above the water line if surfaced. An American flag would mark the point underwater to which the vessel’s nose would extend, and the rudder would rise up from the grounds marking the aft end. Plans include a museum-connected catwalk that would allow visitors to walk topside, and when the real USS Alaska is decommissioned in approximately seven years, the vessel’s sail will be purchased and added to the monument, preserving an authentic piece of the original submarine for generations to come.

“The holy grail is the sail, where the fairwater planes are, and that is what we’re going to try to get from the Department of Defense once it gets decommissioned and they get ready to start scrapping it,” said Alaska Submarine Memorial President Waino Salo. “So we would put a temporary sail in there until that day when we were allowed to get that piece of the submarine.”

Within the museum, mockups of various rooms throughout the submarine, particularly the control room, will use the vessel’s original fittings and control panels wherever possible. An effort will be made to purchase the original periscope, which will afford museum visitors a unique working view of Resurrection Bay.

“We thought that’d be pretty cool because we can get the ship’s periscopes and let the tourists come on through there and feel what it’s like being in the control room,” Salo said. “Then they can look out through the periscopes out at the cruise ships and everything going back and forth there.”

Last month Salo gave an initial presentation before the city council regarding his organization’s plans to bring the monument to town. Salo is a plankowner for the vessel, meaning he served on the submarine’s original gold crew after it was first commissioned. Shortly after Salo’s council presentation, the Alaska’s current commanding officer Commander William Dull and chief of the boat Senior Chief Jeff Bortzfield accompanied Salo on a visit to Seward to tour potential locations for the monument and meet with Mayor Christy Terry.

Though still in the early fundraising stages, the project has recently been granted 501c3 status and is currently exploring potential waterfront parcels of land large enough to accommodate the 560’ long monument. Initial plans placed submarine at the north end of the Waterfront Park campgrounds.

“There’s a chance of putting it down there at the Waterfront Park in the location where there’s the non-electrical (campgrounds),” Salo said. “There’s approximately 64 spots there that are non-electrical. You’re looking from where the tent thing area is there, where the kids play on the playground, and you’d be heading north then and down through there, all the non-electrical, until you get down to where the showers are, and the building there with the bathrooms.”

It has since been determined, however, that waterfront construction would require a US Army Corps of Engineers study commissioned to determine the feasibility of construction on Waterfront Park property, which would necessitate separating the monument from the accompanying museum. Land was considered for the museum slightly inland across Ballaine, near the little league ball field. Since initial inquiries, however, Salo has notified the city that alternative sites nearby are being explored, and he is confident that monument and museum may be located together, connected by a catwalk for easy access from one to the other. Marking the museum entrance, visitors would pass through two concentric rings, the larger representing the circumference of the submarine’s hull, with the smaller the diameter of the missile tubes.

US Navy submarines are manned by alternating crews, a blue crew and a gold crew. Seward is the honorary home port for the USS Alaska’s blue crew. In 1987 the vessel paid a visit to Seward, its first visit to its namesake state, and was met by dignitaries at all levels of government.

“Little did Seward even know at that time that the satellites going overhead were checking in,” Salo said. “The Russians knew that Seward was on the map. If they were going to target the Alaska, being in Seward, they had eyes on us at that time, with overhead satellites.”

“We figured we’d do a full-length water line replica of the submarine,” he added with a laugh. “They’re going to always have to check, and they’re going to say, “Man, they got a submarine still sitting up there in Alaska! We’ve got to watch out for them!”

The ship was christened by Catherine Ann Stevens, wife of Senator Ted Stevens, on Jan. 12, 1986, and commissioned on Jan. 25. Among the Alaska’s notable service distinctions was its mission of debris recovery after the explosion of the space shuttle Challenger only three days later.

“It got right in dead center in the middle of all the debris,” Salo said. “They requested our sonar. Our sonar was requested that we tried to identify anything and everything that was coming through there.”

Salo went on to say that the planned museum will also house recovered pieces of the Challenger shuttle, given the Alaska’s role in the historic tragedy.

“The Alaska is the most decorated submarine of all the Tridents ever built,” Salo said. “It’s also the submarine that was the very first fleet ballistic missile submarine that has gotten to 100 patrols in its career, and they’re still racking them up as we go, until it gets decommissioned.”

Salo went on to say that in addition to contracting JAG for the assembly of the monument’s various metal pieces, other Seward vendors will be used in the construction of the museum, and local labor will be employed for staffing and maintenance of the facility.

The targeted time frame for completion of the project is five years. Waino Salo will be reporting major developments to Council as the project progresses. For more information write to WBSALO.plankowner732@yahoo.com.