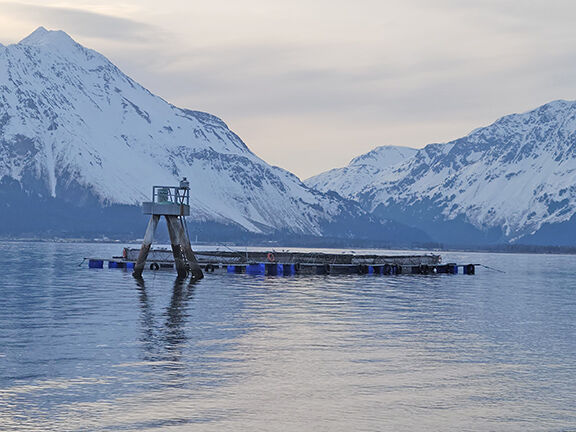 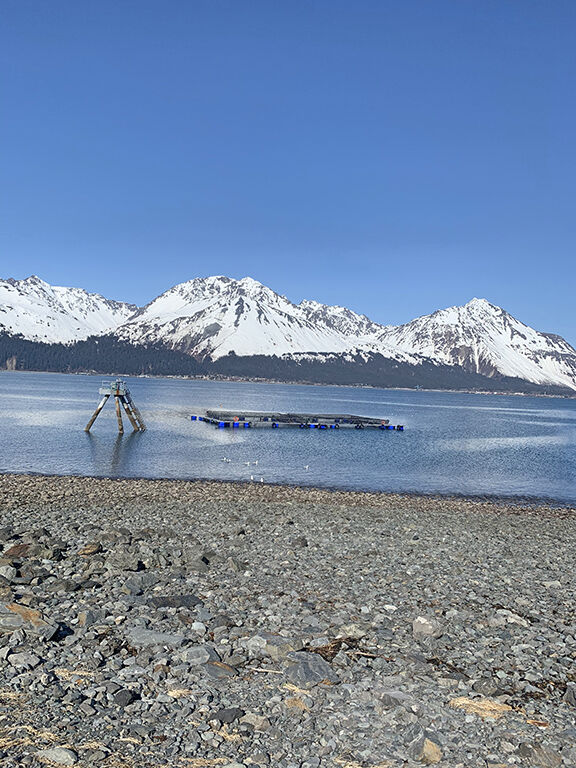 Sockeye from the 2019 Bear Lake egg-take await release from their Sockeye Point pens in Resurrection Bay. 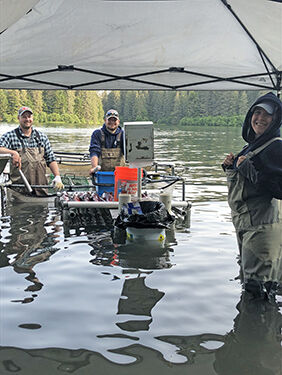 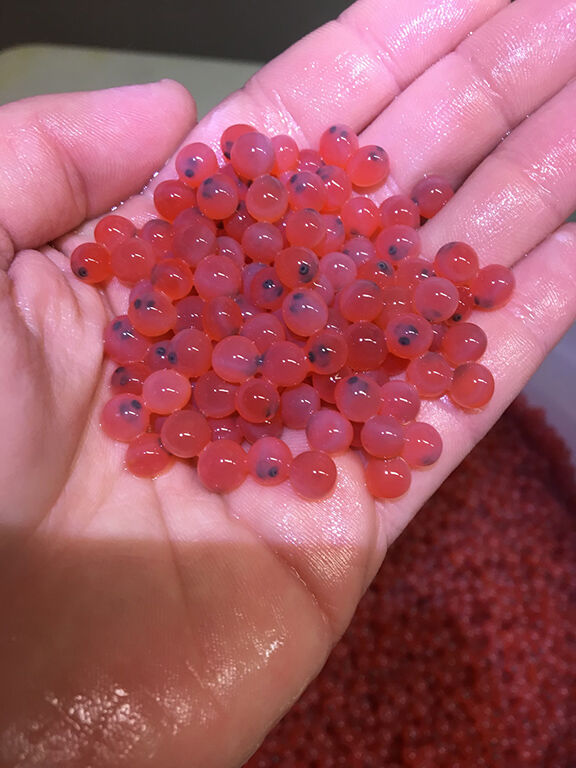 Sockeye salmon eyes can be seen inside eggs that have matured to the point of preparation for otolith marking. 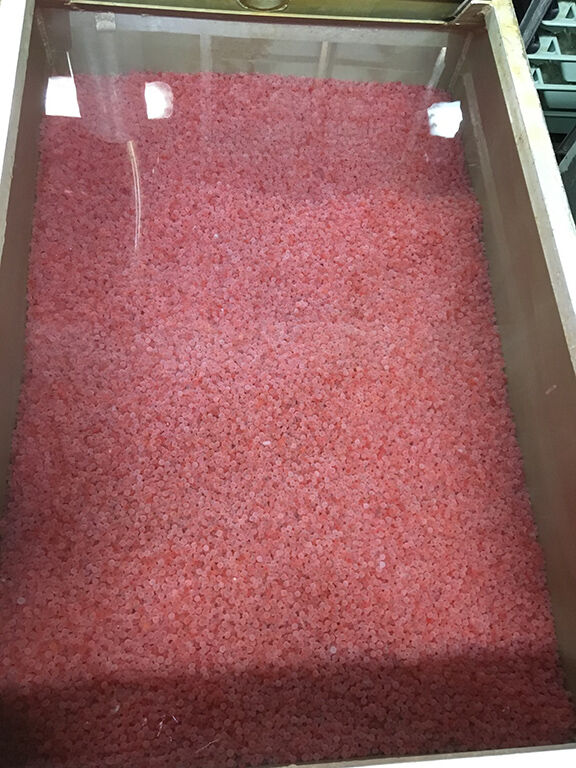 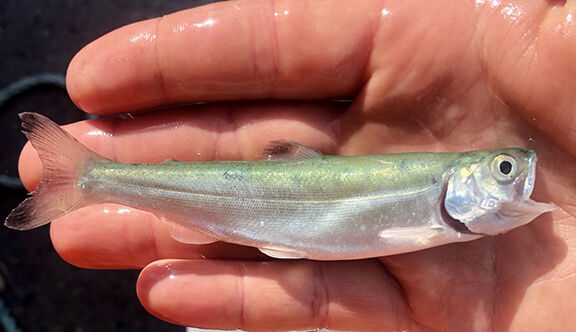 A nine-gram sockeye smolt from the Resurrection Bay net pens. 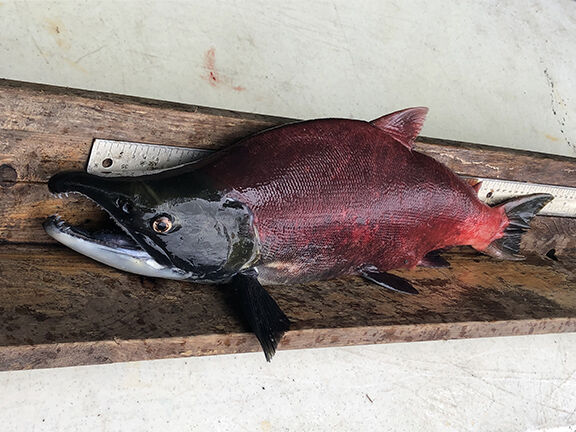 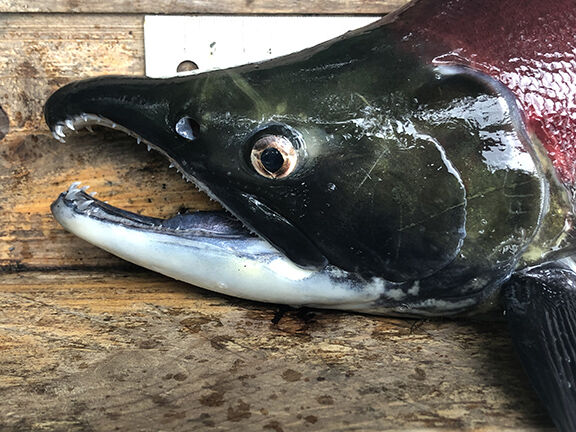 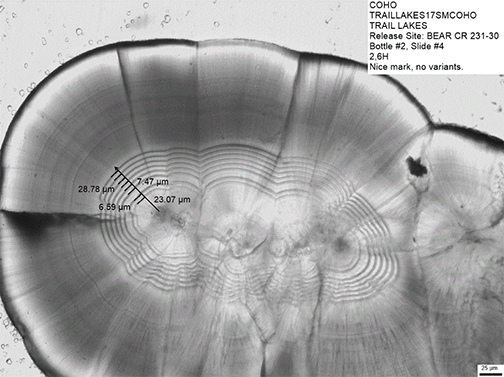 Otolith bone denoting a marking of 2-6.

Sockeye from the 2019 Bear Lake egg-take await release from their Sockeye Point pens in Resurrection Bay.

Sockeye salmon eyes can be seen inside eggs that have matured to the point of preparation for otolith marking.

A nine-gram sockeye smolt from the Resurrection Bay net pens.

Otolith bone denoting a marking of 2-6.

As Seward prepares for another prosperous salmon fishing season, commercial fisheries and anglers alike will plumb the depths of Resurrection Bay for the countless sockeye and coho that return to local waters every year. Many of the returning fish were raised as part of the Cook Inlet Aquaculture Association (CIAA) salmon stocking program operated by the Trail Lakes Hatchery in Moose Pass.

Beginning every May, after spending one to three years in the ocean, the fish begin to make their instinctual homecoming to the location with which they were imprinted while being raised. Currently 1.6 million sockeye smolts await release from their net pens at Sockeye Point in Resurrection Bay. The fish provide ongoing supplies for commercial concerns and individual fisherman year after year, while supporting the continual cultivation of salmon in Bear Lake.

On Tuesday, May 25, Trail Lakes Hatchery is set release the current brood of smolts into the bay as groups from previous years begin their return pilgrimage as adults. The hatchery-guided process promotes sustainability and ensures a healthy number of salmon are able to live out the course of their lives as naturally as possible. Though the salmon returning to Sockeye Point will never spawn in bay waters, other groups raised by the CIAA in Bear Lake will travel upstream through the Bear Creek Salmon Weir and be counted one-by-one before being collected as broodstock.

The cycle begins every July with the Bear Lake sockeye egg-take, when adult salmon are taken and their eggs harvested. To achieve the egg-take goal of 6 million eggs takes 4,500 adult broodstock in male-female pairs, with each female yielding an average of 3,000 eggs. According to Trail Lakes Hatchery Manager Brett Jenkins, Bear Lake employs a method of taking eggs unique among its fellow hatcheries.

“Generally hatcheries have on-site releases, and the broodstock comes back to the hatchery,” Jenkins said. “This is a remote egg-take, which means it happens away from the hatchery. We actually boat in to the back of the lake, capture the fish and then spawn the fish into individual containers, so the gametes are transferred back to the hatchery individually, one male and one female in each container.

Once the two gametes have been mixed, each pair is disinfected in order to mitigate the risk of spreading disease before being recombined into the group.

“It’s a very, very clean process,” Jenkins said. “The idea behind that is that there’s never adults onsite and there’s never releases from site, so we’re not bringing that back into this area. The source of these fish is kept separate from the egg-take site and the release site.”

Once the gamete combinations have been made, one day’s egg-take represents a lot, and each day’s lot of eggs will be kept individually, with its own incubator and its own raceway, the outdoor pond within the hatchery in which the fish are reared. Different stocks of fish also have their own areas within the hatchery in order to promote the health of all lots.

“The idea is that everything is kept completely compartmentalized the whole time it’s here, and that’s just to give them the best chance at being healthy,” Jenkins said. “It’s a lot of extra steps, but that’s what we have to do when we raise sockeye.”

While in incubation, each release group will receive a unique otolith mark.

“An otolith is a bone that’s in the fish’s head that grows just like rings in a tree,” Jenkins said, “and we can lay down a pattern on that bone by alternating water temperature between hot and cold, and that gives that bone essentially a barcode that is assigned by Fish & Game every year for each release group and every brood year, and when that fish is captured later in life as an adult, we can remove that bone, and it’s a way to tell where that fish came from and when it was released, and we use that tool to evaluate our own success.”

In 2020, Trail Lakes staff experimented with a new form of marking that relies on a wet-dry cycle rather than temperature change in order to influence otolith development while drastically reducing water consumption. Regardless of the marking method, eggs remain in incubators until February, when they will hatch and be ponded, moving from the incubator to the raceway. All Trail Lakes fish are volitionally ponded, according to Jenkins.

“The incubator essentially is an artificial stream bed,” he said. “It has plastic media in it that represents gravel, and when the fish hatch they burrow down into that substrate just like they would in a stream. When they decide it’s time to emerge just like they would in nature, they come up and they’re ready to start eating. Those fish get run out of a hose, and they essentially put themselves in the raceway. But we let them decide when it’s time to go outside.”

When ponded, the tiny fry weigh 0.15 grams or roughly one seventh the weight of a paperclip. The fish are fed in the outdoor raceways until early June, at which point they weigh roughly 0.75 grams, and are transported from the hatchery to Bear Lake.

“We’ll drive them down there in a truck, transfer them into a boat, then we haul them to the back of the lake and imprint them on a stream in the back of Bear Lake,” Jenkins said.

The imprinting process determines the location to which the fish will return as adult broodstock. The goal of the program is to restock Bear Lake with 2.4 million fry every year. After a year, the fry mature to smolts and pass through the Bear Creek Salmon Weir on their way to the ocean. One to three years later they will return to the weir to spawn the next generation.

Out-migrating smolts all pass through the Bear Creek Weir, where crews capture and hand-count every individual fish, identifying each, whether coho or sockeye, and sample a percentage for otolith bones. In 2020, crews counted 1.2 million sockeye leaving Bear Lake.

“That’s how we get an estimate of survival, and we get a prediction of future years, how many fish we expect to get back,” Jenkins said.

Roughly 1.6 million additional fry are held at the hatchery and grown to nine gram smolts before being transferred to net pens at Sockeye Point in Resurrection Bay for imprinting in April and May. These fish are then released at the same time as their Bear Lake counterparts begin out-migrating.

“They’ll be there in those pens for one to two months, and then we turn them loose into Res Bay,” Jenkins said. “The purpose of those fish is for cost recovery, and that is for commercial harvest.”

All smolts imprinted in Resurrection Bay will return, unable to spawn in the saltwater of the bay. These fish are then commercially harvested, which further funds the hatchery program through the State Salmon Enhancement Tax. According to the Alaska Department of Revenue, the 2 percent tax is levied on salmon caught or sold in an established aquaculture region and is collected by licensed processors, based on the price paid for the salmon. Fishermen who sell to other buyers pay the tax directly to the state department of revenue.

“Essentially we’re self-funding, which is pretty neat,” Jenkins said. “We’ll commercially harvest some of our own fish, and there’s also a tax that’s levied on commercial processors.”

Not only does the program serve commercial fishing interests, but many of the fish caught by the public in Resurrection Bay are products of the hatchery. The public also benefits from several community outreach initiatives, such as Salmon in the Classroom.

“Salmon in the Classroom is a program we run out of there, which essentially gives tours to groups of school kids, and then in the fall they come through, and we do a coho egg-take while they’re onsite,” Jenkins said. “We do a dissection and talk about the salmon lifecycle. Then we give these classrooms some coho salmon eggs, and they take them back and raise them in their classroom. They’ll hatch them out as eggs in an aquarium, raise them and then turn them loose.”

In non-COVID years, both the Trail Lakes Hatchery and Bear Creek Weir are also open to the public.

“We see quite a bit of traffic,” Jenkins said. “We get lots of visitors.”

The Cook Inlet Aquaculture Association website provides a comprehensive up-do-date resource regarding the various ongoing stages in the process, including release information and daily updates on fish counts at the weir, how many have out-migrated and how many adults have returned.

“A lot of fisherman will follow that as a guide as to when they should go fishing,” Jenkins said. “Once we start seeing a lot of adults, they’ll make the trip down to go catch a sockeye.”

For more information visit the CIAA site at ciaanet.org or follow them for updates at facebook.com/CIAA1976.