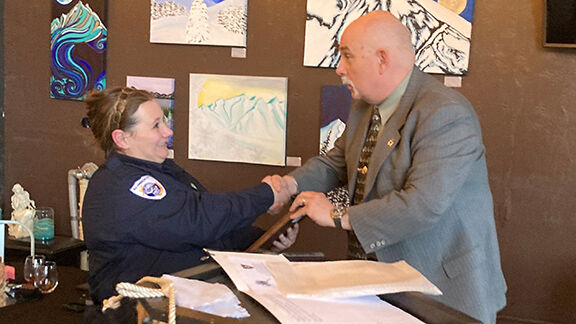 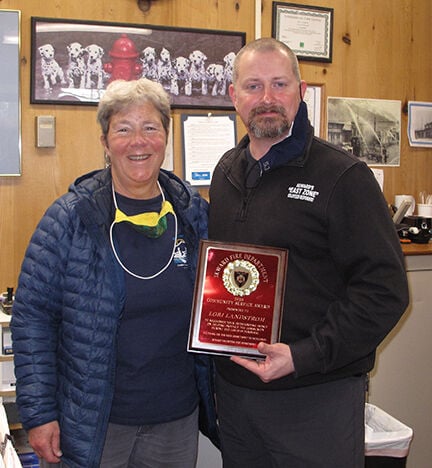 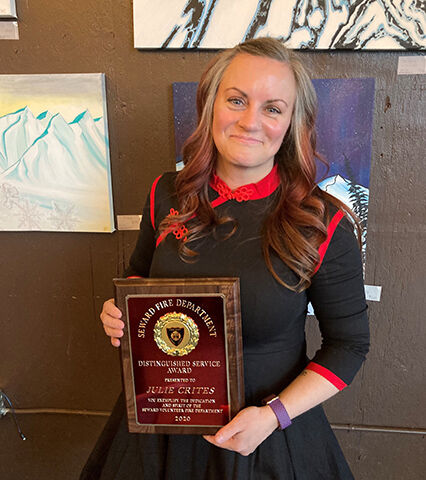 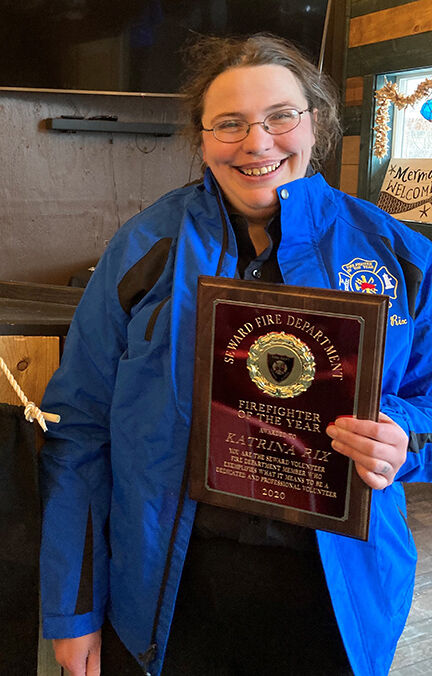 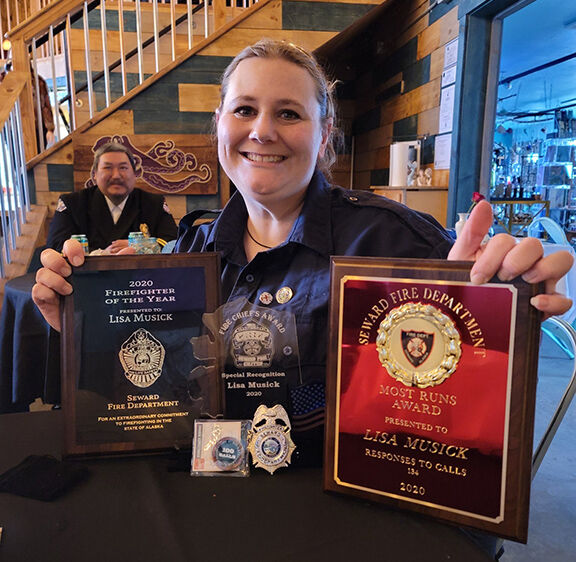 On Saturday, April 10 the Seward Volunteer Fire Department recognized those firefighters who provided outstanding service to the Seward area during the 2020 calendar year. Among the awards bestowed this year was a Alaska State Firefighter of the Year award, personally presented by Alaska State Fire Marshal Richard Boothby to Firefighter and EMT Lisa Musick (pictured above), who responded to 134 calls during 2020 in her capacity as a firefighter.

“The departments throughout the State of Alaska can nominate a person out of their department that they feel has made an impact,” said Seward Fire Executive Assistant Janice Melvin. “Lisa was nominated by our department for that last year, and the State Fire Marshal chose her to win it statewide, and then he actually came down and did the award.”

Musick also received a Most Calls award, specifically for responding the greatest number of calls in the department. She was also the recipient of the Chief’s Award.

“That is the chief acknowledging someone going above and beyond what everybody’s required to do, the person that comes and spends extra time at the fire station cleaning or training,” Melvin said, “and Lisa was recognized for that this year as well.”

Two peer-voted awards were also presented. Seward Firefighter of the Year went to Katrina Rix, and the Distinguished Service Award was given to Julie Crites, who took home an additional award for Most Training Hours, at 158.03.

“We’re extremely proud of all our members and their accomplishments and their dedication to the department,” said Fire Chief Clinton Crites. “The City of Seward is fortunate to have these dedicated members that sacrifice their time and energy, selflessly, and I am lucky enough to call them my family.”

“This year with COVID, it was a challenge collecting gifts to give to the children, as well as giving them to the children,” said Janice Melvin. “So everyone really had to think out of the box, and Elle donated a huge amount of gifts that really helped our volunteers be able to get things to the families in town.”

The individual winner was Lori Landstrom, in recognition for her “outstanding impact on helping protect the community during the COVID-19 Pandemic.”

“Her involvement with COVID vaccinations and testing from the medical side, she was a real advocate in pulling different groups together, whether it was getting people in for appointments, giving people car rides, making accessibility easier,” Melvin said. “She was involved in coordinating making PPE for the doctors and nurses and staff at the clinic and hospital.”

This year’s awards banquet was held at the Mermaid Grotto, a change from last year’s virtual event, facilitated by vaccine availability. Firefighters Katrina Rix and Lisa Musick had previously received recognition in 2020 for their outstanding service during 2019.