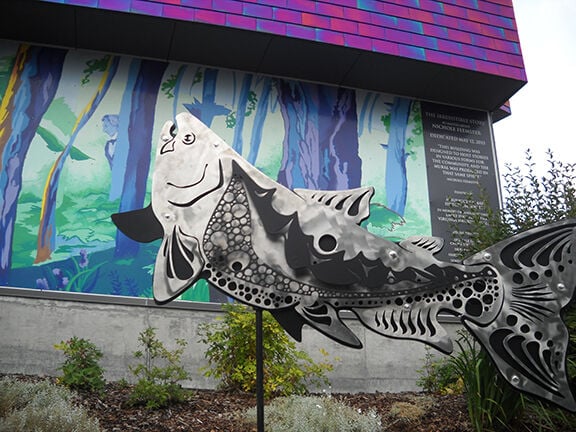 One fish in the “And Back the Way We Came,” sculpture honoring Kim Hughes. 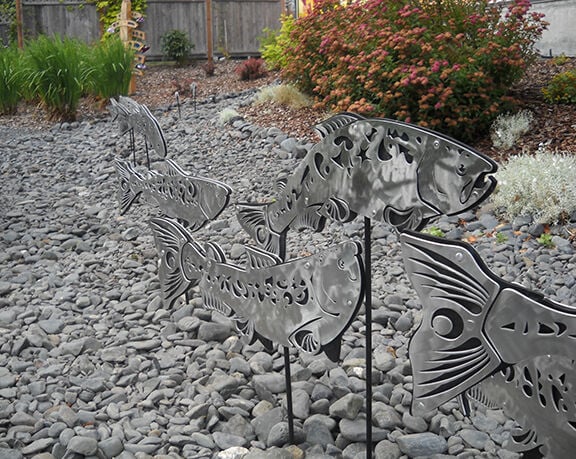 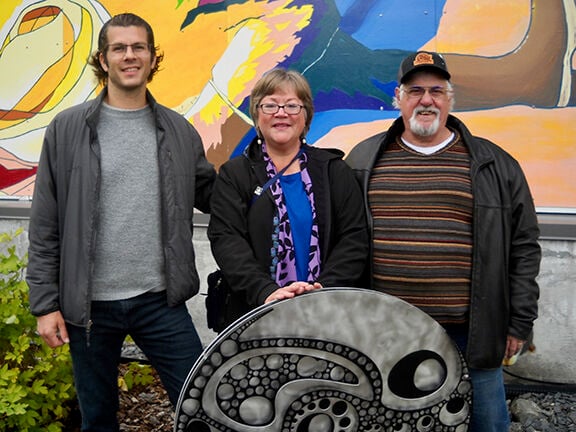 One fish in the “And Back the Way We Came,” sculpture honoring Kim Hughes.

The Seward Community Library and Museum courtyard now has a new sculpture, “And Back the Way We Came,” depicting the many stages of silver salmon as they progress from egg through the end of their life cycle. Commissioned by the Seward Community Library Association (SCLA) to honor SCLA Board Member Kim Hughes, who passed away in 2018, the sculpture was designed by Moose Pass artist Ryan Gaule. According to Gaule, while the initial concept for the piece was given to him by SCLA President Mary Tougas, she also allowed him plenty of room to expand on the idea.

“Mary had the initial concept, which was just going to be silver salmon kind of swimming down here,” he said. “Playing with that concept, we came up with the idea of the whole life cycle, starting from egg, going through each cycle.”

From there, the project began to take shape, as Gaule’s designs evolved from pencil sketches into the CAD files that would eventually be submitted to be cut from sheets of aluminum.

“My intent with the final design and overall sculpture was to catch the unique character of the silver salmon, both for the individual fish and for the defining life stages,” Gaule said in his dedication address. “The title ‘And Back the Way We Came’ should evoke thoughts on the relationship between the life of the silver salmon and our own. The forces of nature that govern the path of the fish must also extend deeply into the underlying mechanics that shape our own destinations.”

The sculpture was cut from aluminum using the water jet cutter at Catalyst Marine Engineering. Each fish is composed of three layers: a matte black-coated core and two identical outer layers, one for each side. Happy accidents also contributed to the design, as Gaule took inspiration from the wind on the day he brought cardboard prototypes down to the courtyard to test their placement.

“It was a really windy day, and there was a flap in the tail, just perfectly, and so the tail of the fish just started flapping in the wind, and we were like, ‘Oh geez, we got to put a hinge on these things now,’” Gaule said. “So hopefully on a windy day the tails should kind of flap.”

The aluminum sculpture was officially dedicated as part of the First Fridays art showcase last week. In her introduction, SCLA President Mary Tougas spoke a few a words in honor of Hughes.

“Kim was a longtime community member, volunteer, wife, mother and daughter,” she said.

“She loved books, she loved the library, and she dedicated herself to getting this library for the community of Seward,” Hughes said, “and I know she’s up there somewhere being very appreciative for what has been done for her.”

It is intended that after sufficient rain, when the courtyard rock bed hosting the aluminum salmon fills with water, the fish will appear atop the resulting pond, framed by the glimmering reflection of the facility Kim Hughes worked so tirelessly to help bring the community.