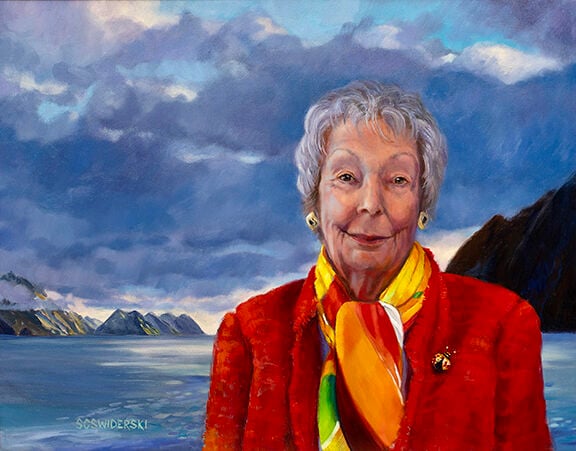 Susan Swiderski’s portriate of Dorothy Urbach which hangs in the Seward Community Library. 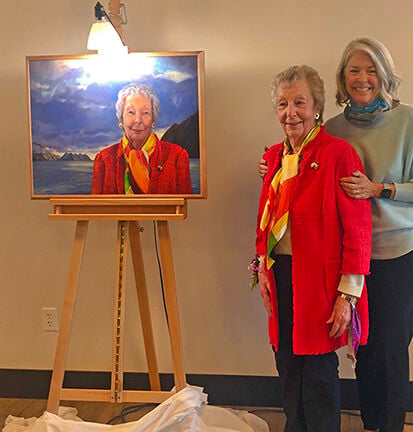 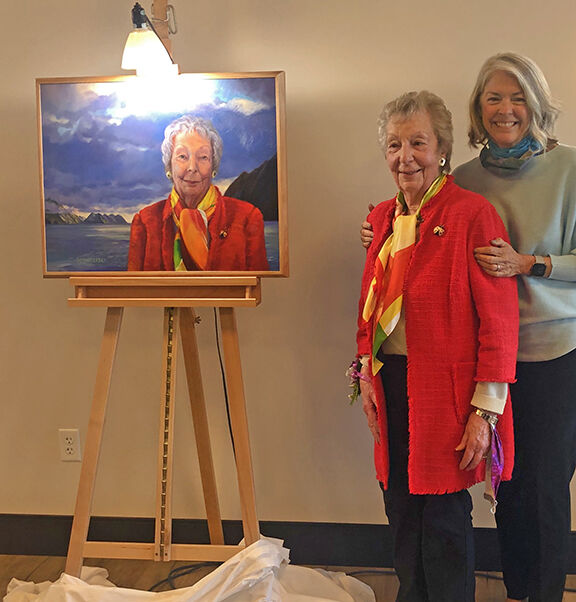 Susan Swiderski’s portriate of Dorothy Urbach which hangs in the Seward Community Library.

On Sept. 19 the newly constructed Gateway Hotel played host to the viewing of a new portrait of Dorothy Urbach by artist Susan Swiderski. The Seward Community Library Association (SCLA) commissioned the painting to honor Urbach, who, in her 93 years, has achieved living legend status as a part of Seward and its history.

“My husband and I were probably president of every organization in town in those days,” Urbach said. “What he wasn’t president of, I was. We’d entertain all the governors and senators at our home years ago, that would come to Seward.”

“The politicians used to come. They would stay with the Urbachs, and she was considered the greeter and hostess of Seward,” said SCLA President Mary Tougas. “She’s living history.”

Urbach’s new portrait depicts its subject warmly against the cool blues of Resurrection Bay. Artist Susan Swiderski admits the choice of setting is unconventional for a portrait, but it began to reveal itself as her work took shape on the canvas. Focusing on what she felt should be a modern piece, she discovered new opportunities to transcend the conventions of portraiture.

The incorporation of the bay was also a choice that played to Swiderski’s lifelong love of landscape painting.

“I lived in Alaska. I’d come home and I’d be overwhelmed by this, outside the window! So I really focused mostly on landscape,” Swiderski said. “I do a lot of landscapes, and they sell. Portraits, the nice thing is, they sell before you do them!”

Though the painting was finished in March, COVID-19 concerns delayed the unveiling by several months. Urbach, whose age places her at higher risk for complications from the virus, did not attend the public unveiling but gathered with family and close friends in a private event beforehand.

The portrait will now hang in the Seward Community Library to honor Dorothy Urbach’s 25 years of service as president of the SCLA. The genuine article, Mrs. Urbach herself, can be seen seven days a week downtown at Urbach’s, still manning the store her family has run since 1915. A copy of her new portrait now watches over the shop.

“I’m very pleased, and Susan is a fantastic artist,” she said. “She gets the soul of the person; it’s not just the picture of the person. She’s very talented.”