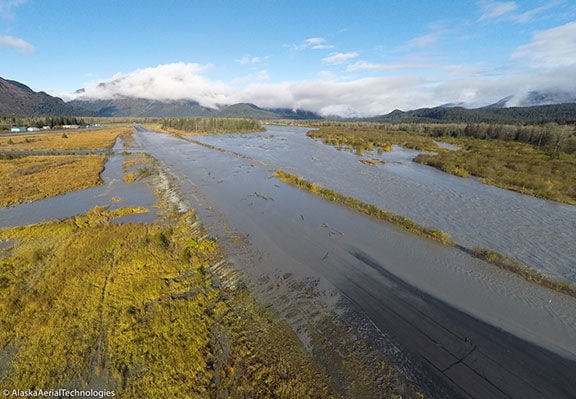 Water covers the main runway at Seward Airport in October of 2018. 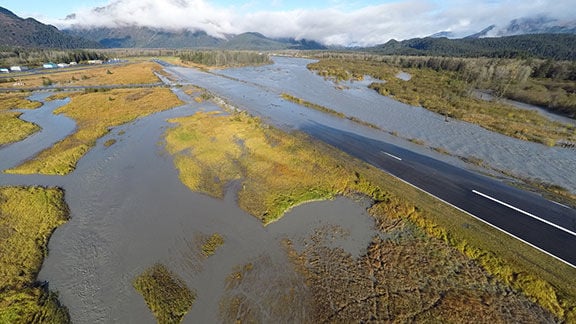 Closed runway at the Seward Airport due to flooding in Oct. 2018.

A public hearing on the Alaska Department of Transportation’s plans for the Seward airport grew heated Thursday night, as residents and airport users butted heads with state and federal employees, who have spent five years laying the groundwork for a project that attendees roundly rejected.

In at least two instances, the meeting devolved into shouting matches between government workers and frustrated audience members.

In spite of the tension, the meeting appeared to conclude on an amicable note, as FAA representative Keith Gordon and DOT regional planner Joselyn Biloon issued a handful of suggestions on how disappointed Seward residents might get around the bureaucratic and legal constraints that prevent the agencies from complying with resident’s wishes.

The gathering at the downtown K. M. Rae Building was originally organized by DOT and the Federal Aviation Administration as a public hearing on DOT’s draft environmental assessment in the Seward Airport Improvement Project. The project is intended to address recurrent flooding and the resulting damage to a runway at the Seward airport.

A number of East Peninsula residents have mounted vocal opposition to DOT’s “preferred alternative” to scrap the Seward airport’s 4,200-foot-long runway and rebuild and extend the shorter one to only 3,300 feet.

Opponents also say that the shorter runway would not accommodate larger craft that might facilitate disaster response, and that constructing it would require filling in wetlands that currently support swans, geese and arctic terns.

DOT and FAA, however, say that the plan addresses the demonstrated need at the airport, according to an FAA formula which defines need in terms of the past, current and projected use of the facility. FAA representative Keith Gordon added that the agency cannot fund construction projects in order to address hypothetical emergencies.

Those most vocal Thursday prefer a different plan that DOT abandoned early in the assessment process, the so-called Alternative 1.1, which would leave both runways in place, armoring the long runway against further erosion by the Resurrection River.

DOT dropped consideration of that plan over concerns about building in a regulatory floodway, which would require consideration from the Federal Emergency Management Agency, and projected flooding impacts to nearby parcels.

Vigorous opposition to DOT’s plan spilled over at Thursday’s meeting, which nearly went off the rails within the first five minutes of public testimony. As the hearing began in the auditorium, several audience members took issue with the format that allowed audience members to speak one by one with no response by project staff.

The City of Seward requested a public hearing from FAA back in February.

A number of attendees said that they had expected the meeting to be a give-and-take in which project staff would respond to comments from attendees. When they realized that the hearing would mainly involve speaking one by one, they began to verbally disrupt the hearing.

The conflict began during a conversation between Federal Aviation Administration representative Keith Gordon and Seward resident John French. When Gordon suggested that they continue their conversation in the lobby, others cut in.

“This is exactly the kind of meeting we want to have,” said Port and Commerce Advisory Board member Bruce Jaffa.

“This is ridiculous,” said Christy Terry, chairwoman of PACAB, and candidate for mayor.

“This is what they always do,” said Carol Griswold. “They divide us up, and they don’t listen.”

Gordon left the auditorium, joined by several members of the audience. As the group walked into the lobby, Jaffa got the attention of a large group still milling about the room.

“I suggest everyone in this room go in there right now and talk and disrupt their hearing,” Jaffa said.

Jaffa’s suggestion appeared to energize the room, with many attendees turning to make their way into the auditorium. In the commotion, a number of the state and federal employees present for the hearing attempted to calm the crowd, including airport project manager Barbara Beaton.

“Do not listen to the rabble-rouser,” Beaton said.

Kenai Peninsula Economic Development District director Tim Dillon said that he had been asked by the City of Seward to come and moderate a public discussion. When he arrived, he found that in fact there was no such role to play.

“It’s a perfect example of how ADOT is not listening to this community,” Dillon said.

Gordon eventually arrived at a compromise with the group, suggesting that the public hearing go forward, to be followed by a more open meeting in which the audience and project staff could have a less structured conversation.

During the public testimony, the vast majority of those who spoke urged DOT and FAA to preserve the airport’s long runway. A few speakers professed no particular allegiance to any scheme, but not one endorsed DOT’s preferred Alternative 2.2, which reduces the airport to a single, shorter runway.

Carol Jaffa captured the apparent mood of the crowd during her remarks: “I think it is unconscionable for an agency that works for the people to come here and not listen to what we want and to force down our throats a solution that we don’t think will work.”

In general, speakers favored an approach that would tackle the airport’s flooding problem head on by taking the fight to the Resurrection River itself.

“The only way to save our airport is not to take the short runway and expand it,” said Bob Reissner of the Seward–Bear Creek Flood Service Area. “The way it has to work is to keep the long runway in place. However, we cannot keep the river where it is.”

DOT has been contending with this argument for the life of the airport project, even going so far as to hire a hydrological engineer to re-examine the issue in 2016. That did not change the department’s position, which remains that Alternative 1.1 would require extensive regulatory approval and elevate the degree of scrutiny required under the National Environmental Policy Act.

During the impromptu public forum that followed the hearing, FAA’s Keith Gordon on Thursday revealed another obstacle to moving the river: FAA likely will not pay for it. The problems with the river lies outside of the project scope, Gordon said, and from a legal standpoint would fall under the jurisdiction of a different agency, such as the United States Army Corps of Engineers.

Gordon also served as moderator-by-default for the public forum, taking questions and comments from the audience in response to a partial presentation by project staff, several of whom sat behind tables on the auditorium stage.

On several occasion, Beaton and Amundson could be seen whispering to each other during remarks by audience members. Beaton, who appeared to smirk at certain remarks, drew particular wrath.

During remarks by Fay Herold, the tension snapped.

“I would bet you in the last five years that you’ve spent time and money, I bet that you’ve not had one person in this community tell you that they want …”

Herold did not finish her sentence, because an apparent chuckle from Beaton set off audience members.

“And you’re laughing about it!” interjected Bruce Jaffa.

The outcry prompted Beaton to leave the room. Another staff member later remarked that Beaton’s reaction was just a response to nervousness and DOT’s Erica Betts added that the project team, including Beaton, had done its best to accommodate critics.”

“No one has gone to bat more for Seward to get a longer runway than Barb has,” Betts said.

“I guarantee you that nobody has worked harder with the FAA to get you what you wanted. This idea that you have not been heard is not correct.”

Indeed, the project website features several documents which record a number of comments very similar to those voiced at Thursday’s meeting.

Asked by a reporter why residents could expect anything different out of Thursday’s meeting when the agencies had already heard a number of the same comments, Gordon said that the meeting would prompt FAA to take another look.

“What’s different about this is we’re down here for another meeting, and I’m hearing it,” Gordon said. “I’m not reading it on a page. So okay, I’ll go back and talk to the environmental lead and I’ll talk to the division director. We’ll talk to ADOT and well see what we can do.

“Obviously, we need to have more conversations.”