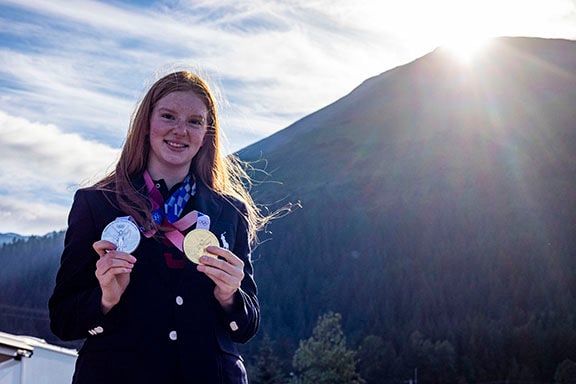 Lydia Jacoby displays her gold and silver Olympic medals with Mount Marathon in the background. 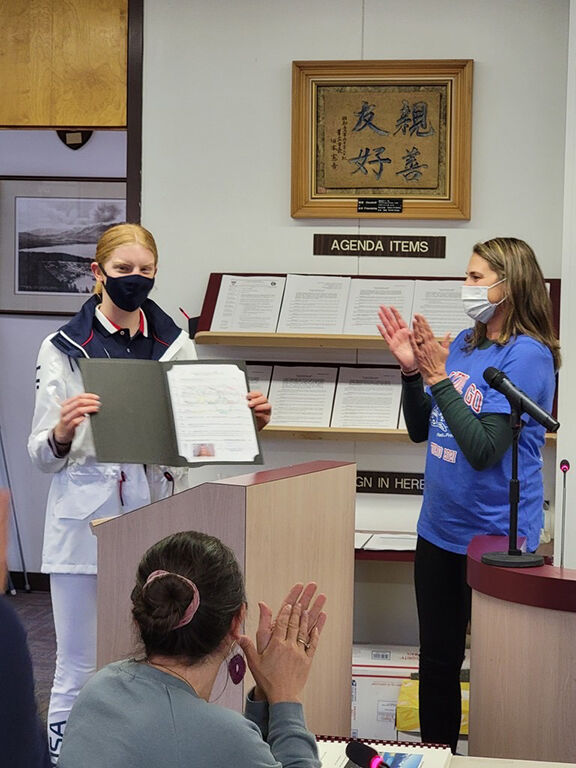 Gold Medalist Lydia Jacoby holds a proclamation from the City of Seward recoginizing her Olympic accomplishments.

Lydia Jacoby displays her gold and silver Olympic medals with Mount Marathon in the background.

Gold Medalist Lydia Jacoby holds a proclamation from the City of Seward recoginizing her Olympic accomplishments.

Last Monday Mayor Christy Terry officially recognized Lydia Jacoby on behalf of the city in what is the latest in a long line of accolades and honors for the 17-year-old Olympic breaststroke gold medalist. After three astounding Tokyo swims Jacoby wrote herself into the history books as Alaska’s first gold-winning swimmer, the Tsunami Swim Club phenom returned home to a hero’s welcome, complete with a parade and visits from the governor and other state dignitaries. Yet now that the homecoming ticker tape has begun to settle, Jacoby will again resume the routines of a life disrupted by the worldwide notoriety that followed her accomplishments. Now able to reflect on those accomplishments with greater perspective, Lydia recently discussed her Olympic journey and all the recognition her dazzling performance has garnered.

Though technically her swimming story began at age six, the Olympic chapter of Jacoby’s tale found her on a plane to Tokyo after her Olympic Trial swim resulted in a new personal best time of 1:05.28. The time seeded her second only to world record holder Lilly King, and secured her a spot competing against the greatest athletes in her sport. Though initially nervous about being thrust into such high level competition, Jacoby approached her Olympic adventure with a confident sense of maturity beyond her years.

“Learning to enjoy the moment is a really important thing,” she said. “I think a lot of people get carried away when they go to big meets or big events. For anybody traveling or doing something big or scary for the first time, just take a step back and think about how you got there somehow, and therefore you deserve to be there. You’ve earned your spot, and you just need to go in, stay humble but stay confident.”

After arriving in Tokyo, adjustment to her new life in Olympic Village might likewise have proven intimidating if not for the clarity of Jacoby’s perspective.

“At the camp you are all there to train and grow together,” she said. “Just being around that group of people who are all just as motivated as I am, and with that group of coaches who have a ton of experience coaching people at my level, I definitely learned a lot and it was a great experience.”

The village itself impressed Jacoby with each of its participating nations’ areas proudly featuring patriotic symbols of their respective cultures.

“Each nation has a big apartment complex,” she said. “Smaller teams might have multiple nations inside, so everybody has it decorated. You’ll walk around, you’ll see different teams will have their country’s flags and banners all over their building. Some go all out. Great Britain brought a telephone booth, and Australia brought a giant kangaroo statue.”

Before long Jacoby discovered a number of fellow newcomers with whom she connected on the common ground of their relative youth and lack of Olympic experience, yet she also availed herself of the returning veterans’ wisdom.

“There’s a big group of teenagers around the same age I am that are going through the same big life-changing things as I am, so it was really cool to have them there,” she said. “Then on the other end of the spectrum to have the veterans there who have done this anywhere from one to four times before, to have them to kind of be our mentors and to have people to go through it with was incredible. Getting to know everybody, Team USA, USA Swimming Team, people from other countries after we got there, the people really made it special.”

As she settled into her new training regimen, Jacoby found herself forging bonds with both the athletes she had grown up idolizing and her fellow first timers.

“When you watch it on TV — I know I used to think of it this way; I think everybody does — it’s just easy to look at the screen and see these superhuman athletes that you don’t even think of as people,” she said. “To be there in the village with everyone, it’s not at all like that. Obviously, we’re some of the best at what we do. Everybody there is, but at the end of the day we’re all just people that are doing the same thing. When everybody’s an Olympian, everybody’s just a person. As crazy as it was, when you’re in the dining hall, you’re just eating with friends and peers, and it was really cool.”

On the subject of the dining hall, Jacoby noted that every cuisine imaginable was provided and every dietary need was catered to.

“It’s just this absolutely massive room that you walk into, and there’s a second story that’s another huge room, and all around the walls there’s different types of food, all labeled, huge,” she said. “There’s an Italian section, dim sum section, Japanese section, grill section, so there’s all types of food that you can imagine.”