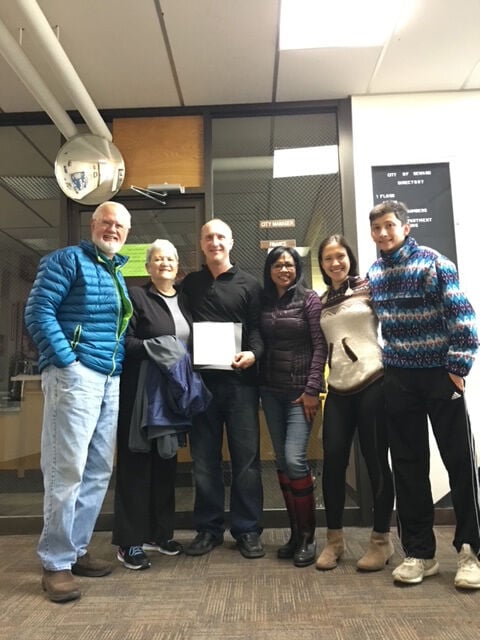 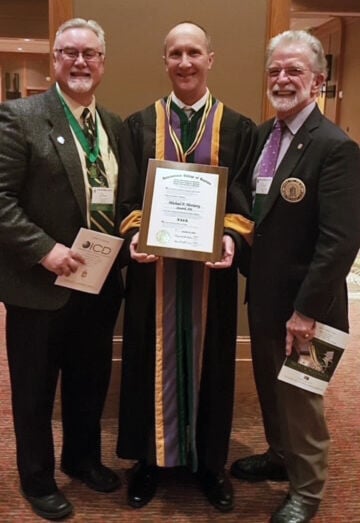 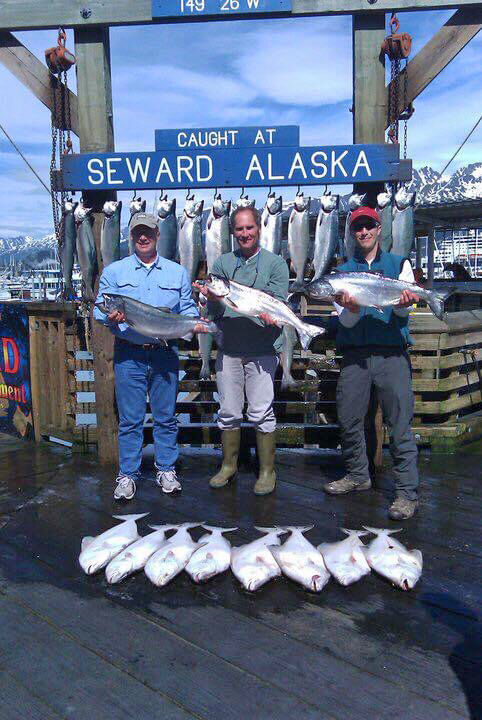 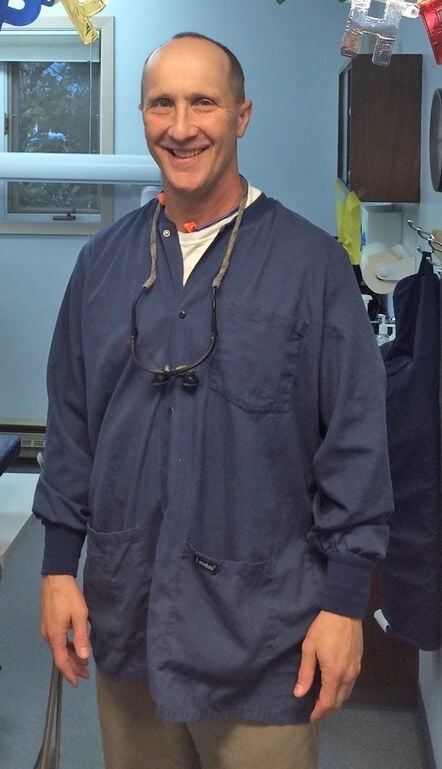 The name Michael Moriarty has been synonymous with excellence in dentistry in Seward for thirty years. Practicing here since April of 1991, this month Dr. Moriarty begins his fourth decade of service to the people of Seward and to their smiles. As long as he has been a mainstay of the community, many may think that Dr. Moriarty is a Seward native, and indeed there are many Sewardites who have never known a world without him, but his journey to Seward began over twenty years prior to his arrival, on the windswept plains of South Dakota.

The eighth of nine children born to John and Bernice Moriarty of Brookings, South Dakota, Mike grew up in an environment as populated by animals as by siblings. Though a pharmacist by trade, Mike’s father amassed as many animals as any farmer, less because it was lucrative and more for its value in teaching his children responsibility. His sister, St. Louis Circuit Judge Joan Moriarty, recalled the many creatures that roamed the grounds of their childhood home.

“We lived on the edge of town and we always had animals,” she said. “There were seven brothers. My dad had to do something to keep them busy, so we had all sorts of animals that we grew up with. We had horses, and we had cows, and we had chickens, and we had geese, and we had ducks, and we had turkeys. We always had a big garden, and Mike was always involved with the animals.”

It was this veritable animal preserve that accounted for much of Dr. Moriarty’s love of the outdoors, which manifested from his earliest years.

“We had a creek in our backyard,” his sister recalled. “He started fishing probably when he was two, three years old. As a matter of fact, he was still in diapers and he would put on a coat and shoes, and he was found at our creek. He was probably looking at the frogs down there, or the little minnows. He loved it since he was a little kid.”

His brother, Dr. Leo Moriarty, DDS, recalled that as the Moriarty children grew into their teenage years, their duties to their chores would come before most extracurricular activities, but they did manage some involvement in animal-related activities such as 4-H and FFA. Although time for diversions was limited, Leo said, Mike still excelled at those he did pursue.

“There was a lot of work around the house, be it working with cattle, horses, doing chores, chickens,” Leo said. “We never really had time for sports. It kind of discouraged us because we were always bailing hay or taking care of cattle or stuff like that, but you know, he was really good at the ones he did: softball, stuff like that.”

Just as his athletic prowess manifested from an early age, so did his personality, said his sister Joan.

After high school, Mike enrolled in Creighton University, the Jesuit college in Omaha, Nebraska that all nine of the Moriarty siblings would eventually attend, either for their undergraduate or graduate degrees. It was at Creighton that Mike would follow the advice of family friend and councilor Fr. Richard McGloin, SJ, who would recommend he follow the same path as his brother Leo in a career in dentistry.

Enrolled in Creighton’s world class dental program, Mike would receive an injury in his second year that would severely jeopardize his chance to graduate on time. Going up for a slam dunk in a game of pickup basketball, Mike tripped over a fellow player and suffered a fall that wound up breaking both his wrists. In a cast that left both arms completely immobilized, Mike was unable to meet the hands-on requirements of his clinical work.

“Your hand skills get perfected at the second year, and if that doesn’t occur, if you’re really all thumbs… then you’re not allowed to move on to the third year to practice on patients,” said longtime associate Dr. Bruce Horn. “Since he was not able to use the hand piece or use his hand skills, he attended every laboratory that the other students were doing so that he would learn at least visually what it was that he was supposed to learn to do.”

Getting his casts removed with little time to spare, Mike was able to accomplish in a matter of weeks what took many of his fellow students months to perfect.

“The amount of work that had to get done in a short amount of time, where other people spend the whole semester to get it in a few weeks or a month,” said his brother Leo. “There’s always personalities that would make it difficult at any school to say, ‘No, nobody can do this.’ And he did it anyway. I think it’s a testament to his drive that, I know what it takes to get that amount of didactic work done, and for him to do it in that short amount of time spoke highly of his ability.”

It was while at Creighton in 1989 that Mike first met the woman who would later become his wife, Maya Benavente.

“He was just this honest type of person,” Maya said, “but the biggest thing about him that I was attracted to was that he always made me laugh.”

After graduation, on a trip to visit his brother Pat, then a veterinarian practicing in Fairbanks, the newly-dubbed Dr. Michael P. Moriarty, DDS, discovered the other love of his life: Alaska. Dr. Warren Huss, who owned the practice Moriarty would eventually join, recalled that when he contacted one of Moriarty’s professors, the dental school instructor was well aware of his former pupil’s love of the outdoors.

Recalled Huss, “I called this fella up and I talked with him and I said, ‘What can you tell me about Dr. Moriarty?’ ‘Oh,’ the guy said, ‘he’s one of the very best dentists that I’ve had in my class. But that’s when he was in class. The guy loved to hunt and fish. But when he was in class, he was great.’ The guy had glowing reports for him, so I accepted the fact that he was probably a good fit.”

It was in fact his love of the outdoors that contributed to Moriarty’s being a good fit. Many of Dr. Huss’s previous associate candidates were only looking to spend a year or two in Seward that they could then write off their taxes. Dr. Moriarty, he said, was seeking to put down roots in a small town where he could hunt and fish to his heart’s content.

“He came in and joined the practice, and it just worked out perfect,” Huss said. “He hadn’t practiced for a year, doing dentistry. I had the fortunate thing where I went in the service right after I graduated from dental school, and you got a lot of training. Well, he hadn’t had that, so for the first, oh, month or two he was a little bit green but was a quick learner. I mean, he was just bright, and he caught on right away.”

“It’s been fun to watch him excel into the dentist he’s become. He just takes pride in what he does,” said Moriarty’s first dental assistant Jeannie Shirk. “I guess it’s all the little things he does that make him such an asset to our community.”

The little things, from making mouth guards for high school athletes to volunteering at playground builds and school sporting events, Dr. Moriarty began to demonstrate a commitment to his community from his earliest days in practice. His sister Joan said that his willingness to contribute has been a hallmark of her brother’s personality from the time he was young.

“He’s always been a leader,” she said. “Even in our family he’s been a leader, and he was a leader at Creighton, and obviously he has very strong leadership skills that he puts to work in Seward. He’s been heavily involved in the community there, and that started back in Brookings.”

It is a leadership Dr. Moriarty has demonstrated, not just in his community, but in the dental community at large. As a chief examiner for the Western Regional Examining Board (WREB), Moriarty plays a pivotal role in evaluating the clinical skills of dental students for initial licensure in 40 states. WREB Director of Dental Examinations Dr. Bruce Horn praised Moriarty for both his sense of humor and the acute intelligence it belies.

“Mike has a wonderful sense of humor,” Horn said. “Sometimes people with a great sense of humor, their innate intelligence is hidden beneath there, and people don’t always see that. Mike is one of the smartest people I’ve ever met: smart in technical skills, smart in treating people correctly, and smart in just making common sense decisions.”

What may be considered Moriarty’s best common sense decision was matrimonial in nature. Maya joined her husband-to-be in Seward in 1997, and by 1999 the couple were wed. Children Maille and John would follow shortly thereafter.

In 2004, when Dr. Huss announced his retirement, Moriarty purchased the practice and has upheld its reputation as a cornerstone of the community ever since, with a hearty helping of laughter along the way.

Longtime friend, fellow WREB examiner and Alaska Dental Society President Dr. David Nielson recalled an instance in which he and Moriarty were ejected from a bar, not for drunkenness or being disorderly, but on account of the sheer volume of Moriarty’s laughter.

“His laugh is totally infectious and it’s actually a pretty loud, infectious laugh,” he said. “I think we were at a sports bar in Kansas City during one exam, and we actually got kicked out of the sports bar because we were having too much fun. We weren’t obnoxious, but the way Mike is, he really likes to have fun, and I’ve never, hardly ever, seen him in a bad mood. He’s just a really good guy to hang out with.”

It is perhaps fitting that a man so capable of inspiring laughter has dedicated his life to the refinement and maintenance of smiles. The atmosphere that Dr. Moriarty has worked to cultivate at his dental practice over the past three decades is equal parts warm and welcoming, comfortable and compassionate. To say that he cares for his patients is an understatement, and it is his genuine empathy for both customers and staff that motivates his every decision.

“He cares for people,” said Dental Assistant Celeste Lemme. “He’ll treat you like you’re part of the family. That’s kept me there. Our office is like a family. It’s pretty awesome. He’s very patient with his patients, and he cares about the product and the quality of work. He has a lot of compassion.”

How apropos for a man with so many gleaming white teeth to his credit that the 30th anniversary is known as the Pearl Anniversary. As his staff and family congratulate Dr. Moriarty on three decades of service to the city, they invite all of Seward to share in the celebration with free cookies beginning Monday and for the following two weeks, available in his office at 400 Fourth Avenue. All are welcome to stop by for a cookie and maybe a laugh or two.