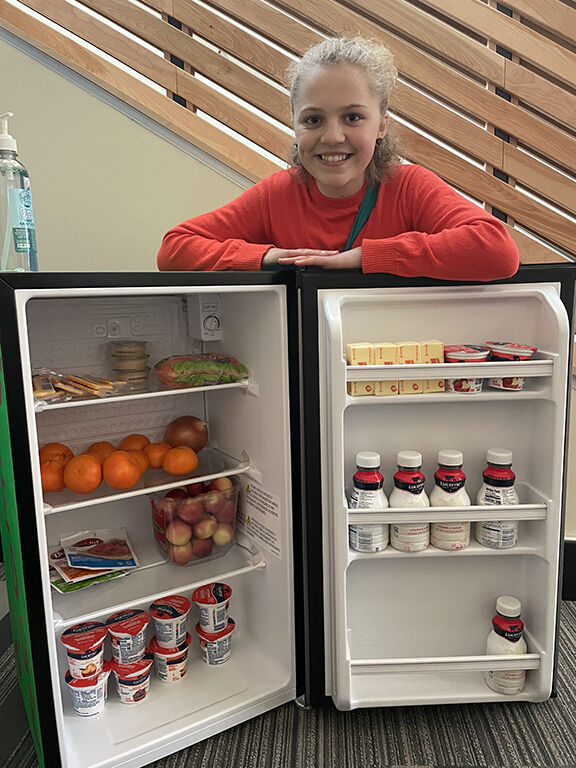 Seward Freedge’s Maren Bickling showcases its bounty, free to anyone in need. 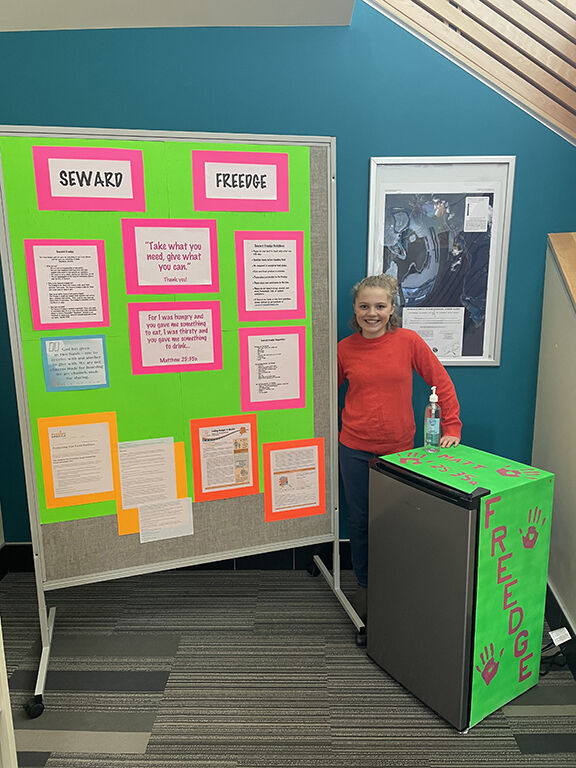 The Seward Freedge and its 11-year-old founder, Maren Bickling.

Seward Freedge’s Maren Bickling showcases its bounty, free to anyone in need.

The Seward Freedge and its 11-year-old founder, Maren Bickling.

A local Seward student has founded a program to provide a free food resource to the community, available five days a week. After seeing news accounts of similar initiatives on the local news in Los Angeles, 11-year-old Maren Bickling was inspired to create the Seward Freedge, a refrigerator housed in the lobby of the Seward Community Library that provides free perishable goods to those in need, available during the library’s normal operating hours from 11 a.m. to 8 p.m. Tuesday - Saturday.

“We watch a daily news program,” Maren said, “and it was on the news in LA, and I thought it would be super awesome to have one here, and we started looking on Craigslist.”

“She started saving her money right after she saw that news program,” said Maren’s mother Teresa. “These little freedges were popping up all over LA. She just thought Seward needed one. We know that we have a homeless population; we know that we have an impoverished population, and so she just had a heart for helping feed the needy. She essentially bought the fridge with her own money.”

After purchasing an inexpensive mini fridge from Craigslist, in August Maren began the process of securing all the necessary approvals to house the refrigerator in the library. By April all the permissions had been granted, and the Seward Freedge was born.

“We stock it weekly,” Maren said. “It’s free, so anyone can take and anyone can give.”

“We’ve just been enjoying checking on it twice a week,” Teresa added. “It’s been neat to see that other people are stocking it, so that’s kind of exciting when we open it up, and it’s not the food that we bought.”

Maren went on to say that the Freedge can be seen as a supplementary resource to the He Will Provide Food Pantry.

“We have a food pantry, but that’s open one day a week, and that only has dry goods,” she said, “but the Freedge is kind of special because it has refrigerated goods, fresh produce, and it’s open Tuesday through Saturday.”

Though Maren has been the principal maintainer of the Freedge’s food supply, she explained that anyone is welcome at any time to contribute donations of individually packaged food items. She also mentioned hopes that the project gains momentum within the community.

“At our church we actually have a jar for money, and we have several signs up, so we’re hoping that word will just spread and the community will kind of take over,” she said.

“That really is the goal is that eventually the community will really take ownership and chip in,” Teresa said.

Maren’s plans for the future also include an eventual expansion, with additional Freedges made available at locations yet to be determined. With such lofty goals as these, the question arises, what drives such an ambitious outreach in someone so young? Though initially given the idea through television, Maren was quick to cite her primary inspiration as Matthew 25:35 – “I was hungry and you gave me something to eat; I was thirsty and you gave me something to drink.”

For more information on how to contribute, write sewardfreedge@gmail.com or visit facebook.com/seward.freedge.