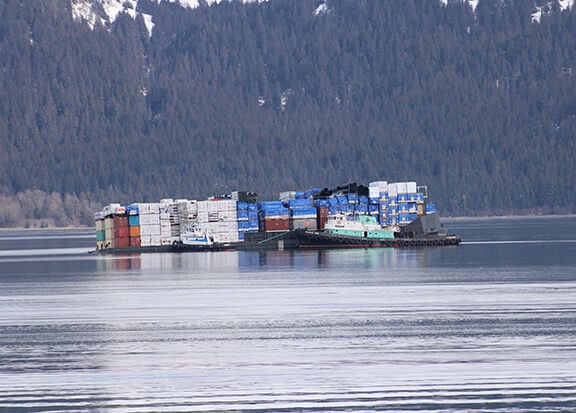 The Atlas, controlled by the Junior is moved into the Seward Boat harbor. The barge is low in the water on the far left corner. 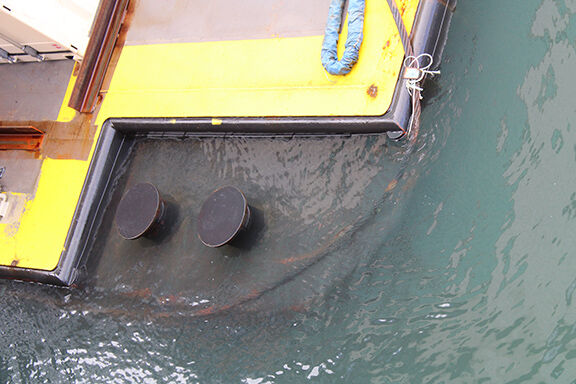 The Atlas, controlled by the Junior is moved into the Seward Boat harbor. The barge is low in the water on the far left corner.

Concerned spectators gathered along Waterfront Park on Sunday to witness a barge that was listing as it floated into Resurrection Bay under supplemental tug support. The stern port quarter of the 300' x 100' SeaTac Atlas appeared to be dipping into the water as the barge was escorted over the calm bay waters to its place at the Seward Freight Dock. SeaTac Marine President Walter Seay said that while it was operating sub-optimally, neither the vessel itself nor the cargo was ever in any danger.

“It was low in the water, which was not what the plan was, but the barges are pretty stable,” he said. “We’ll discharge the cargo, we’ll check it out, and then we’ll probably sail south maybe Wednesday night, Thursday maybe.”

Since docking in Seward, as cargo is being unloaded, the stern port quarter has already risen substantially from its lowest point, at which the platform was even then above the water line. Seay went on to state that no cargo was damaged in transit and that no repairs will be necessary before the barge returns to its home port of Seattle later this week.

“We’ll do a thorough check, but the barge is built and stable enough,” he said. “There are many tanks in the barge. It’s a stable, big platform. The cargo was stable. We trimmed out the barge and the discharge there. We didn’t want it that low, but we’ll correct that.”

The Atlas is being unloaded by North Star Terminal and Stevedore, and while much of the cargo will now be shipped from Seward via truck, a portion will make the next leg of its journey via train.

The Atlas is the third SeaTac barge to dock in Seward in 2021, one more than past years owing to the uncommonly cold temperatures preventing the barge from docking in its usual port of Anchorage.

Previous SeaTac barges docked on Feb. 17 and again on March 21 this year. Mayor and Alaska Railroad Seward Port Manager Christy Terry hailed the presence of a third barge as a big win for the city.

“Seward should be happy we were having a really cold spring because it’s been a benefit,” Terry said. “Some of the economic ramifications are, longshore is able to work. We have truckers coming to town, picking up the freight. There’re people coming in to man the barge, so they’re staying at hotels, eating at restaurants. There’s all that economic, just a little injection into the community, and that’s outside of the longshore locals that are able to work this barge and load the trucks.”

Built in 2010, the Atlas was purchased by SeaTac from Signet Marine late last year and subsequently modified to maximize cargo protection and space. The vessel is the latest in a long line of SeaTac barges to dock in Seward since the year 2000. Tug assistance was provided by Seward’s 53’ towing vessel, the Junior. Seay went on to note that while the Atlas’s condition never presented a threat, he was grateful to Seward crews and stevedores for their support.

“I think they got it under control,” he said, “and I’m getting good reports.”