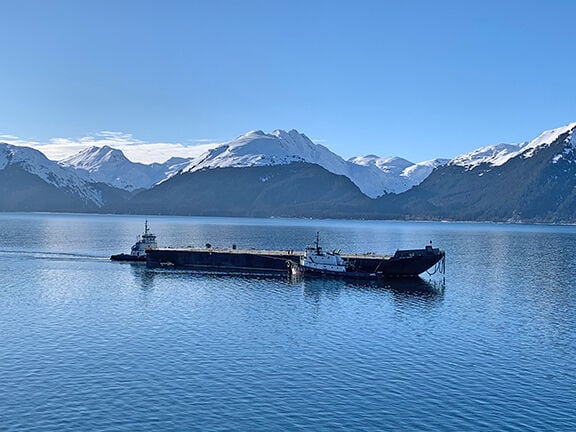 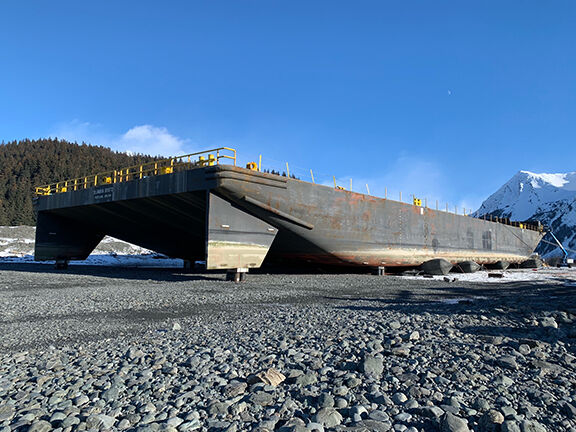 The Columbia Boston awaiting overhaul at the JAG Shipyard. 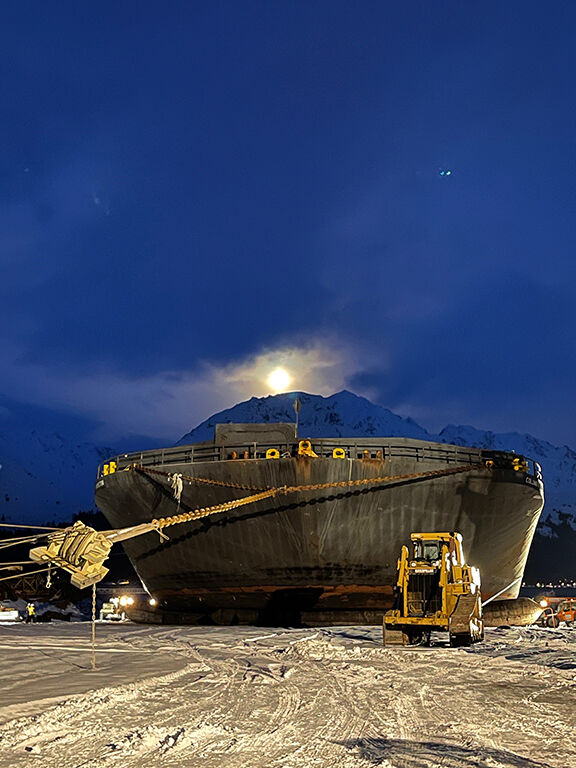 The 90 x 360 foot Columbia Boston, believed to be the largest ship repaired on land in Alaska being moved on airbags at the Seward Marine Industrial Center.

The Columbia Boston awaiting overhaul at the JAG Shipyard.

The 90 x 360 foot Columbia Boston, believed to be the largest ship repaired on land in Alaska being moved on airbags at the Seward Marine Industrial Center.

JAG Industrial and Marine Services recently completed what promises to be a landmark work order for Seward and for the state of Alaska. After undertaking nine days of repairs on a 2,200-ton barge, the Columbia Boston, JAG crews released the vessel back into Resurrection Bay using hydraulically-controlled airbags. The barge was hosted on land owned by Sockeye Point Marine Services, which has partnered with JAG to accommodate larger vessels on its land north of the JAG shipyard. The 60-acre Sockeye Point yard boasts a gently-sloping wide ramp capable of pulling craft even larger than the Columbia Boston.

“Seward’s unique,” said Sockeye Point Marine Managing Partner Mark Nelson. “This is a two percent ramp, maybe slightly less, and so it’s really unique to have this much acreage to pull a barge that size because the bow is clear out there and the stern is clear back here, and it takes a pretty good chunk of property.”

The success of the Columbia Boston repair sets a precedent for JAG and for the city that could result in contracts for even bigger vessels, said JAG VP and Co-Founder Tim Jagielski.

“This job being successful opens up the door to probably five or six other ones that we know of, that people were just waiting to see if we could get it up and back successfully,” Jagielski said. “It saves them quite a bit of inter-port, taking them down to Seattle or Portland, a barge that size, because there’s nowhere up here they can get them done.”

The prospect of a repair facility capable of accommodating barges even larger than the 90 x 360 foot Columbia Boston would make Seward a repair destination for oil response barges that historically could not be accommodated in Alaska, necessitating travel to the Lower 48 for repairs at great cost.

“There are other barges like oil response barges that are up here of this size or bigger that would be pure inter-port differential, because they have no reason to go down there,” Jagielski said. “The out-of-service time on the oil response barges is huge. They usually have a 21-day window or something, and they can’t afford to be out any longer, and it’s probably 5-7 days each way window time if they go to Seattle.”

The completion of work on the Columbia Boston marks yet another milestone in JAG’s continued growth since its arrival in Seward, and Jagielski hopes the company’s partnership with Sockeye Point Marine will enable further expansion.

“For us it’s a big plus because our employment and our revenue growth have been on a pretty steady pattern,” Jagielski said. “When we came there were six employees. I think the first year we averaged 70. Then in ’19 we averaged 100, and then we’re about 125 now, but the yard is 92 percent full clear up until November right now. So the only way to continue that growth pattern and to continue the employment rise is to have another spot and develop another business segment, which this would be a big part of.”

Mark Nelson added that the partnership between JAG and Sockeye Point Marine will continue to prove beneficial for both.

“It’s like a strategic alliance that we’ll work together to get this size and larger barges out,” he said. “It’s ideal because they can literally pull up here, park it. It doesn’t interfere with the other barges that are on the property, working. So we’re continuing to develop the property for large and small. Synergistically it’s worked out really well.”

“We really appreciate Mark having the forethought to develop this place,” Jagielski added of the Sockeye Point property.

Both Jagielski and Nelson stressed that their mutual growth should also prove beneficial to the city at large.

“We’re building resources here,” Nelson said. “It trickles back to the city because you have people, employees live in the city. They shop, they eat out. Especially right now with COVID. Any industry is welcome because we don’t have any tourism.”

Not one to rest on the laurels of his success, no sooner had the 360-foot Columbia Boston slid safely back into the waters of Resurrection Bay than Tim Jagielski shifted focus to his next prospect.