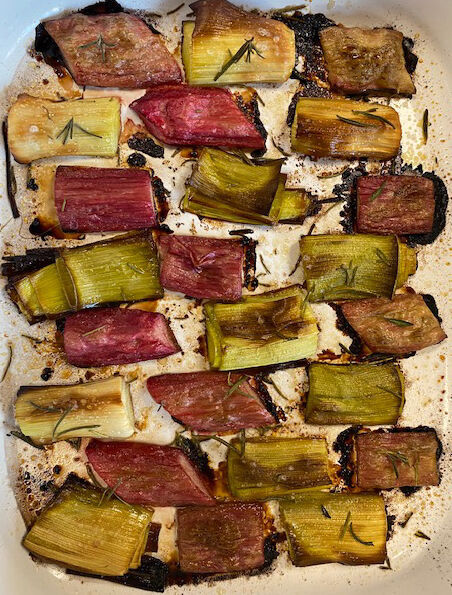 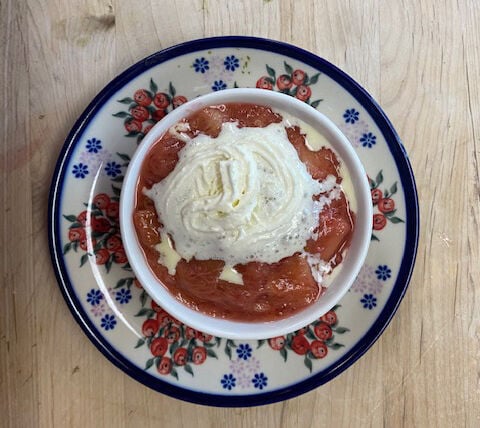 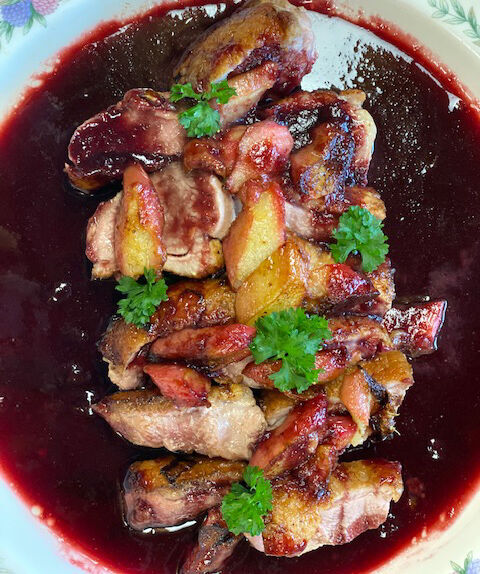 Chicken breast in a cherry juice and diced rhubarb sauce.

Chicken breast in a cherry juice and diced rhubarb sauce.

Eating by the season is often suggested as a way to assure nutritional adequacy. Others suggest choosing deeply pigmented foods and "eating the rainbow" for best health. Eating locally can also be both economical and enjoyable. Rhubarb fits the bill as one of an Alaskan garden’s colorful seasonal treats in late spring and summer.

The desirability of rhubarb isn’t just about its unique, tart flavor, but also that it is one of only a few cold hardy, perennial vegetables. With the right care it can grow well in most parts of Alaska.

To grow rhubarb, choose a location with full day sun and well-drained loamy soil. In addition to good drainage, rhubarb likes soil that is high in organic matter. Prepare the site by digging a hole large enough for your root mass at least 10 to 14 inches across and 12 to 18 inches deep. If you are hoping for more than just a couple of pies a year, take the time to amend the soil if necessary, adjusting pH and soil/compost mixture and dig deep and wide enough for good drainage and expansion of the roots. You may want to give yourself room at the outset for your own transplants or expanding your patch.

During the first year of growth, you will leave the stalks on the plant to provide energy for the growing roots. This will help assure a better harvest in subsequent years. When your plant is four to five years old, you can propagate your own, splitting the crown and adding this to your rhubarb patch or sharing with a friend – this is typically and most successfully done in the spring.

Rhubarb starts can be purchased at local greenhouses when summer perennials arrive or online. There are many varieties from which to choose including some that produce light green or variegated stalks. Most people prefer the look and taste of the red stalk varieties. Be forewarned, the color may not be consistent from year to year.

Fans of this bright, tart vegetable need not wait for the snow to melt. Produce from around the world, including rhubarb, may be found at the market almost any time of the year, although I rarely find much in Fairbanks grocery stores except during April and May.

Rhubarb is very low in calories and high in fiber. Other nutritional plusses include modest amounts vitamin C and calcium and small amounts of the antioxidant lutein, beta carotene, riboflavin, thiamin, niacin, vitamin K and iron. Note that rhubarb leaves should never be eaten — leaves are considered poisonous and contain a potentially toxic level of oxalic acid.

While thoughts of mouthwatering pies may be the first thing springing to mind, a nutrition-conscious friend asked whether anything else could be done with it to avoid eating so much sugar.

The answer is an enthusiastic "yes”. In some countries, rhubarb is consumed more like any other cooked vegetable — with preparations ranging from sautéed and roasted to sauces, stews and soups. Many state fair chili cook-off contests include an entry with rhubarb.

In most recipes, the tartness is offset with tomato, fruit/fruit juice or a tiny sprinkling of sugar. For those who want or need to avoid excess sugar, but still want a pie, experiment with using less sugar or using some of the newer low/no carbohydrate sweeteners, such as erythritol, xylitol, stevia or monk fruit sweeteners.

To get you started, if you like both rhubarb and leeks — two spring favorites — try roasting them. Rinse and cut your rhubarb and leeks into two-inch lengths. Oil a gratin pan or roasting pan and place vegetables in the pan, topping with some fresh thyme or rosemary. Drizzle oil over vegetables and sprinkle with salt and a teaspoon of sugar – adjust to taste — it doesn’t take very much. Roast until tender in a 375º F oven.

Enjoy your spring with local foods and getting outside for gardening! For more detail about growing and ideas for cooking, preserving and eating rhubarb, refer to Cooperative Extension’s publications Growing Rhubarb in the Alaska Garden (HGA- 00042) and Rhubarb Recipes (FNH – 00064).

Leslie Shallcross is a registered dietitian and the Tanana District health, home and family development agent for the Cooperative Extension Service, a part of the University of Alaska Fairbanks, working in cooperation with the U.S. Department of Agriculture. She can be reached at (907) 474-2426 or lashallcross@alaska.edu.