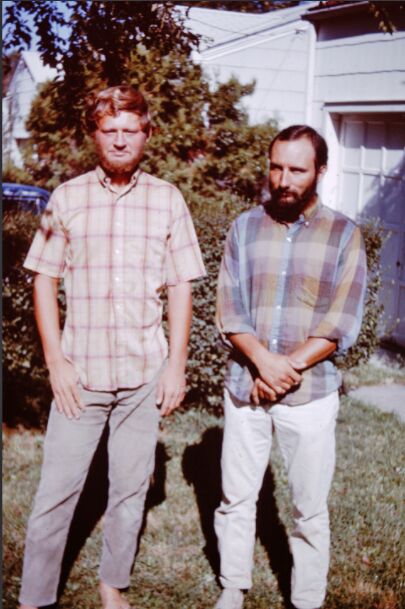 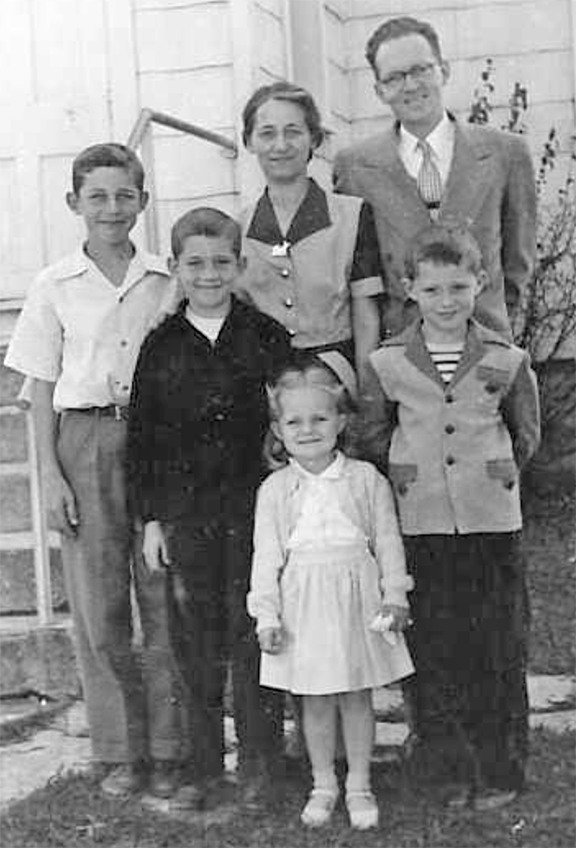 The Davidson family circa 1950. Pastor Malius and Majorie Davidson; the three brothers from left, Paul, James, Jack (John); and Mary. Daughter Debbie was yet to be born. 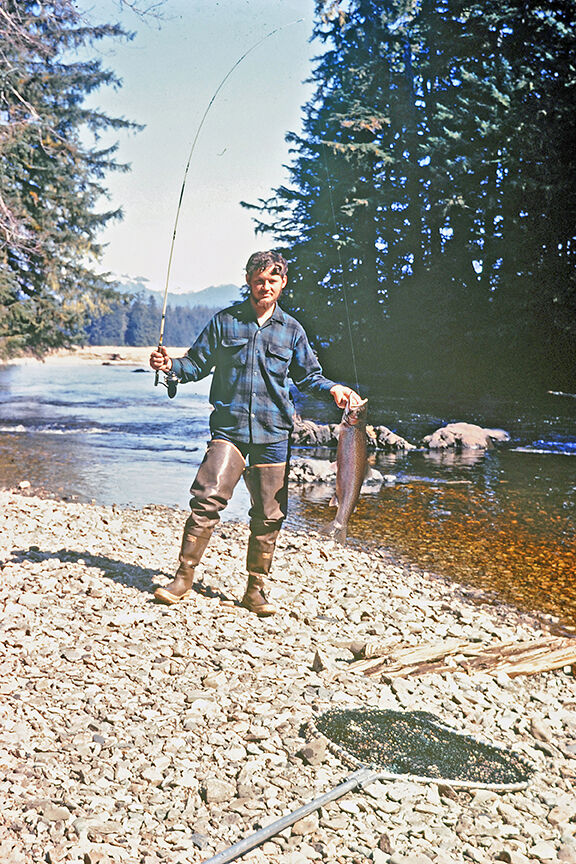 John Davidson while working for Alaska Fish & Game in Southeast Alaska. Any free time he had, he would go fishing or hiking.

Part 6 in a Series

“I have been thinking that the only way I will get much satisfaction out of life is to remove myself from a very sick society and just live on the fringe of it with a simple life similar to Thoreau in Walden. I don’t wish to become a hermit but I think this will work out later. First, I want to build a place to live, then if I leave I will have something to come back to.”

John Davidson in a letter sent from Seward to his father, Oct. 5, 1969

A simple life similar to Thoreau in Walden

John Davidson and Jimmy Curnes ended their cross-country kayak trip in mid-November 1966. By that time, “hippies,” as some called them – or “freaks,” as they occasionally called themselves – had been gathering for a year in San Francisco’s Haight-Ashbury district. A few years earlier, blue-collar working families abandoned the area and moved to the suburbs. Old homes rented cheap. College students moved in, as did various countercultural sorts fleeing the North Beach crowds and high rents. As W.J. Rorabauch writes in “American Hippies,” “Trippers…grooved on ‘Acid Rock’ music, and many were also spiritual seekers. Drugs, music, and spirituality were at the core of the hippie movement.”

But “hippiedom,” if we can call it that, existed on a continuum. At one end lived the extreme drug, far-out costumed, and groovy commune – “trippers,” as Rorabauch notes – some who, frankly, just dressed the part. At the other end were the conservative “straights.” But a zone of tolerance existed in the middle comprised of those with countercultural views in alignment with some hippie culture, but who didn’t necessarily do drugs or tend to “jump on bandwagons.” Since many in this centrist group also wore long hair, they were often considered “hippies.”

Even with his long hair and distinct dress, John Davidson was not a hippie. He was too independent, a charming original from his youth, a sensitive rebel and creative problem solver.

“He was in his own world,” his brother Paul remembered, which some interpreted as shyness.

He lived for the outdoors – fishing, hunting and trapping.

“My brother and I were a little hard on him,” his brother Jim said. “Jack went on to become the most adventurous and fearless person in the family.” They called him Jack, but in Alaska he introduced himself as John.

His brother Jim recalled young Jack climbing onto the porch roof. “He promptly fell off landing between two firewood logs, but was totally unscathed.”

Jack read Looney Tunes and Disney comic books. As he got older his interests turned to books about nature, the outdoors, the West, and mountain men.

“If Jack had lived at an earlier time, he would probably have been a mountain man trapping beaver in the Western U.S.,” Jim said. “He didn't have much patience with conventional society and always wanted to do his own thing. He didn't hang out with the popular crowd and never dated girls in high school. He did, however, join the wrestling team and stayed with it until he graduated.”

Although he loved the solitude of wilderness, “He was not a philosopher, I wouldn’t take him there,” his brother Paul observed. “He was more part of nature than a student of nature.”

If there ever existed a personality type with the proper training and disposition for surviving homesteading along the harsh Gulf of Alaska coast, it was in John Davidson.

“The area in Pennsylvania where we lived, the Cumberland Valley, was made up of gently rolling countryside,” Jim said, “and was bounded on the north and south by the heavily wooded Appalachian Mountains. In the valley itself, there were a lot of streams, wooded areas, and overgrown fencerows – all of which made great habitat for small animals. And that made it possible for one of Jack's favorite hobbies – trapping for furs in the winter months. He became an excellent trapper – even trapping fox--which were extremely hard to catch.”

Jim did taxidermy in high school and made an animal diorama for the science fair. Jack provided the animals – weasel, skunk, fox and others.

“He didn't mind going to check his traps every day since he was a person who always wanted to be active,” Jim said. “As a tall, lanky teen, he had the kind of endurance to keep going at a steady pace for a long time without tiring. If we were doing something together, he would eventually wear me out.”

On one snowy day, Jim went with his brother to check muskrat traps. “I was totally freezing while he was calmly resetting his traps in the icy water using his bare hands and seeming to be oblivious to the weather.”

Jack skinned the animals and stretched the hides inside out over a wire frame. “Then, at the end of the season, he would sell the furs to a dealer. I don’t think he made much money, but he had a lot of fun.”

“So, that was Jack as I remember him. Always nice, never mean, but always a little frustrated with life. Conventional life irritated him, and he was never really happy unless he was on his own challenging adventure.”

Right after high school, his next adventure was in the military. The Air Force perhaps tempered some of his tendencies but strengthened his discipline, confidence and mechanical skills. Perhaps, his brother Paul says, but the Air Force was another adventure to him, a chance in his off time to ski the alps, hike the trails and explore the glaciers. And time to learn kayaking with his friend, Jimmy Curnes, as they both planned their excursion across the country.

Since raised in a religious family with his Pentecostal minister father, did John have a spiritual component?

“Yes, but it was his own style,” his brother Paul notes. “He wasn’t attracted to a church community or a denomination. He never seemed to be comfortable in that setting, but he did have a spiritual part to him. There was a Bible in the cabin when I visited after his death, and his parents who visited him several times were convinced of his spirituality.”

During that fall of 1966, Alaska, Seward, Day Harbor, and Driftwood Bay were only distant places on a map to both John and Carolyn.

Once back home in Carlisle, Pennsylvania, after his kayaking adventure, John Davidson had decisions to make. Standing still did not suit him. He was restless.

Attendance at Evangel, a private Christian college in Missouri, was a family tradition. His oldest brother, Paul, had started the ritual followed by next in line, Jim. Now it was John’s turn. In later years, his sisters Mary and Debbie continued the custom.

John and Curnes had made it clear during the kayak trip they hoped to earn money for college by selling their kayak trip story. Many photographs and slides had survived. Logically, the next step would be to work with publishers and perhaps head off to college.

While on the kayaking trip, John wrote home on June 11, from Livingston, Ohio: “I am beginning to feel as though I could take school now and I think I will (be) looking forward to school by the end of the trip.” That didn’t happen. Neither did the magazine articles. Their story became part of archives belonging to the newspapers that covered it.

By mid-February 1967, John was working in Juneau, Alaska, staying with his father’s brother, Roy Davidson, an Assembly of God minister, and his wife, Pauline. He knew a traditional academic classroom wasn’t his forte. Perhaps his family urged him to give it a try. He may have resisted, still unsure of what direction to take next.

Not confident in the college route, perhaps John’s father recommended a trip to visit his Uncle Roy and Aunt Pauline in Alaska. Get a job for the summer, earn some money and think about college in the fall. Perhaps that was the plan. We don’t know for certain.

But by February 20, 1967, he was earning $450 a month for the Alaska Department of Labor in Juneau working in a stock room and delivering mail via truck. This was hardly the job he wanted, but he was making connections through his uncle. Perhaps he’d work as a crewman on a fishing boat getting a percentage of the profits.

He would fill out an application for Evangel College, he wrote home, but regretted that would mean he’d miss a whole skiing season. He would also apply to some community colleges. For all his confidence gained after the kayaking adventure, he was still unsure about college. John was happy to hear his sister, Mary, was doing well in school but added, “I will be happy if I do half as well.”

He recognized how the many press interviews he granted during the kayak trip, meeting with admirers along the way, and conversing with strangers had helped with his shyness. An August 2 letter while on the kayak trip admits that those occasions, “force me into being sociable and to talk when I normally wouldn’t. Because of the publicity we have to keep a good front up.”

In Juneau he did a slide show of the trip to 75 Rotary Club members, “prominent people of Juneau,” he wrote home, and added, “I was worried if I could interest this high a level of people but they really seemed to enjoy it and said they liked (the) matter of fact way I talked about it. This made me feel better.”

Finally, his opportunity arrived. By early March he was hired by the Sport Fishing Division of the Alaska Department of Fish & Game. John would begin on April 10 and would be flown out to a remote site near Petersburg. John Davidson would now be in his element working in the solitude of the Alaska wilderness.

Doug Capra is the author of “The Spaces Between: Stories from the Kenai Mountains to the Kenai Fjords.” In addition to many Alaska history articles, he wrote forwards for two reprints of books by American artist Rockwell Kent. He has written poetry, essays and plays. His most recent play titled “A Social Distance” is published in the June 2021 Cirque magazine. Earlier parts of this series can be found online at sewardjournal.com. People who knew the Davidson or who have photographs, information or letters, can contact the author at capradr@yahoo.com.