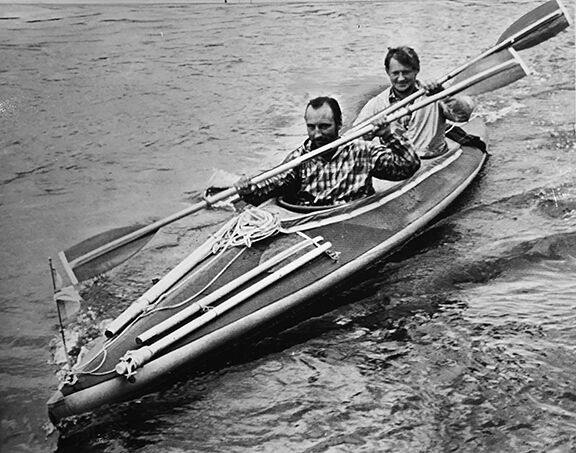 John Davidson (back) and Jimmy Curnes (front) paddle up the Clearwater River in Northern Idaho. Beginning on May 29, 1966, they covered 484 miles in the first 26 days of their trip across the country. 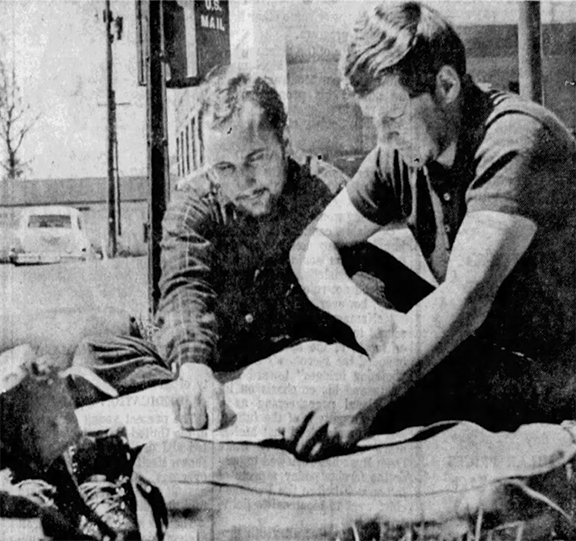 Jimmy Curnes, left and John Davidson, right at the Longview, Washington bus station examine maps of their kayak trip as they wait for the bus to Astoria, Oregon. The two Air Force veterans met while in Germany, learned how to kayak, and began planning for a trip across the country.

The Associated Press and newspapers along the route followed the two kayakers on their journey across the country. Longview Washington Daily News May 19, 1966.

John Davidson (back) and Jimmy Curnes (front) paddle up the Clearwater River in Northern Idaho. Beginning on May 29, 1966, they covered 484 miles in the first 26 days of their trip across the country.

Jimmy Curnes, left and John Davidson, right at the Longview, Washington bus station examine maps of their kayak trip as they wait for the bus to Astoria, Oregon. The two Air Force veterans met while in Germany, learned how to kayak, and began planning for a trip across the country.

The Associated Press and newspapers along the route followed the two kayakers on their journey across the country. Longview Washington Daily News May 19, 1966.

Part 4 in a Series

But Mouse, you are not alone,

In proving foresight may be vain:

The best-laid schemes of mice and men

And leave us nothing but grief and pain,

from “To a Mouse” by Robert Burnes

For the year 1966, the two kayakers presented a bizarre picture.

They began their cross-country journey on May 19 at Astoria, Oregon on the Columbia River with 115 pounds of gear in a two-man, 85-pound Klepper kayak. John Davidson – “Dave” to his partner, Jimmy Curnes – was impressed and surprised at the width of the Columbia.

“The wind was so strong at times it felt like we were in the ocean,” he wrote home on June 2, later telling the press they had encountered 12-foot swells. By then they had gone through several locks “large enough for ocean liners and rise 80 feet, but (the Army Corps of Engineers) have to let any size boat through. It was quite an experience.”

John would typically stay in the kayak steering while Jim got out and rang the bells to notify the lock worker, then helped rope the kayak through the lock.

By October, nearing the end of the trip, Davidson and Curnes, had learned much and survived a few disasters – enough to ascertain the truth of the Robert Burnes poem about “The best laid schemes o’ Mice an’ Men.” They discovered how to adapt and change plans as needed. The two men had beards with hair down to their shoulders. Davidson had a golden earring through his left earlobe, symbolic he said, of the “gypsy -like life” they were leading. “People don’t know we’re not beatniks until they find out what we’re doing,” Curnes told the press.

It is significant that he used the term, “beatniks,” which may have emerged to describe the new generation of “hep cats – those late 1950 beats,” i.e., wise, and sophisticated folks who loved jazz and understood “jive.” By attaching the Yiddish diminutive “nik” as a suffix to “beat” it became “little beats.”

This was also the age of “sputnik.” Davidson and Curnes were not “beatniks.” Nor were they “hippies,” a word just beginning to enter common usage, evolving from “hipster,” describing the beatniks of Greenwich Village, San Francisco’s Haight-Ashbury district, and parts of old Chicago.

John, 21, from Carlisle, Pennsylvania, and Jimmy, 23, from Wheeling West Virgina, as the people they passed on their journey soon learned, were recently discharged Air Force veterans who had served their country in Germany as missile guidance mechanics.

Their hometown newspapers followed the kayak trip closely as did the Associated Press (AP). Davidson told reporters they were making the trip “just for the sake of doing it,” but they both hoped to interest magazines in the story. Eight had already contacted them about publishing their adventure, and both men hoped the money would help pay their way through college.

Curnes added, “We´ll make the trip alright and we´ll prove that it is still possible for a man to travel the country and see it without a lot of money.”

It would be a challenge, perhaps a trial, and certainly an experiment in the good life and simple living.

The journals both men kept indicate – according to Jimmy Curnes’ nephew, Doug Curnes, who is writing a book about their trip – one reason for the journey was to just get away from it all. Davidson’s later letters clearly demonstrate his disenchantment with what he calls a “sick” society and the world, not uncommon among many young in the late 1960s and 1970s. For him, this kayak trip perhaps enforced his long-held need for a limited solitude, the wild, and a romantic impulse to live meaningfully in nature. He was more introvert than extrovert, and the voyage helped him come out of his shell.

“I think the people we met on this trip is the most educational part of it,” Davidson wrote on Aug. 12. “They force me into being sociable and to talk when I normally wouldn’t. Because of the publicity we have to keep a good front up.”

His shyness was observable, especially around girls. “Has a general dislike of girls,” his high school yearbook said of him.

On this trip, while kayaking through Illinois, the two met up with Davidson’s brother Paul for a few days. Paul took them to a local dance, introduced John to some girls and tried to get him to talk about the kayak trip. John wanted nothing to do with it. His shyness, perhaps, could sometimes be interpreted as indifference or even dislike.

Davidson and Curnes had purchased most of their kayak equipment in Germany, about $1,000 worth, and practiced on European lakes and rivers. For Curnes, who had never even paddled a canoe, it was all new. Davidson had at least the experience of short canoe trips and a longer one on the Juniata River. They shipped their gear along with their two-man kayak to the Curnes’ home on Wheeling Island, West Virginia.

In the draft of his book, Doug Curnes writes, “Tween the shores of the swift Ohio River…lies a historic morsel of land embedded under the overpass…the people of the Ohio Valley refer to it as ‘The Island…This island has about 3,000 people.” Two bridges connect it to the mainland. “This small, but significant, island,” Curnes adds, “was where my uncle’s epic kayak story was put into motion.”

Once discharged, Davidson made a brief visit to his family in Pennsylvania, then to Wheeling where the men packed and took a bus to Longview, Washington. On Wednesday, May 18, as they waited at the Kelso Greyhound Bus Depot for afternoon transport along the Ocean Beach Highway to Astoria, the Longview Daily News took a photo of them surrounded by their gear, seemingly studying a map. The caption noted that they would, “return past Longview on the Columbia in a few days heading for Chesapeake Bay.” They had a two-man tent, sleeping bags, a liquid-fuel stove, and four cameras with various lenses. They’d store their vulnerable equipment in waterproof, floatable bags.

They planned to purchase a week’s worth of food at a time along the way, but they’d also live “off the land,” fishing and using their .22 rifle to bag game.

They already had a factory repair kit for the kayak and were experienced in using it.

For safety, they would wear life jackets in rough waters, a lesson they had learned while practicing in Europe where they hit some rapids on the Inn River and broke the vessel’s frame in 13 places. This may be the time Davidson’s mother told the press of her son nearly drowned, hitting the water but finally able to grab a boulder on his third time bobbing up.

Davidson and Curnes told the press the expedition was a year in the planning. “The route is burned in their minds so deep that they left their maps at home,” the newspaper said. The men’s journals, however, indicate they did have maps, but hoped to get more detailed ones along the way. For the 4,000-mile trip they’d follow the course of ten rivers through three mountain ranges with many miles of portages.

At the confluence of the Snake River, they’d leave the Columbia and follow the Snake to its source at the Montana border. Ahead of them, the Bitterroot Range required a 30-mile portage to Clark Fork, north of Missoula. It was on the Clearwater, while observing the loggers at work, that they named their kayak the “River Pig.”

They planned to leave Clark Fork as close to Helena as possible for a 20-mile portage over the Continental Divide to the Missouri River which they’d follow all the way to St. Lewis, their halfway point. A 100-mile paddle down the Mississippi would take them to Cairo, Illinois, then into the Ohio River, struggling upstream on their way to Pittsburgh.

Along the way they would pass within 200 yards of the Curnes’ home on Wheeling Island where, the newspaper said, “they should have a feast waiting for them.” From there the Monongahela would carry them to the Cheat River and into West Virginia. A final 30-mile portage through the Allegheny Mountains would bring them into Maryland and the Potomac River at its headwaters – ending the journey with a quick ride to Chesapeake Bay.

That was the plan.

Special thanks to Doug Curnes (nephew of Davidson’s partner, Jimmy) who read through a draft of the kayak adventure series and offered suggestions. Doug is writing a book about his uncle’s and Davidson’s kayak trip.

Doug Capra is the author of “The Spaces Between: Stories from the Kenai Mountains to the Kenai Fjords.: In addition to many Alaska history articles, he wrote forwards for two reprints of books by American artist Rockwell Kent. He has written poetry, essays and plays. His most recent play titled “A Social Distance” is published in the June 2021 Cirque magazine. Earlier parts of this series can be found online at sewardjournal.com. People who knew the Davidson or who have photographs, information or letters, can contact the author at capradr@yahoo.com.