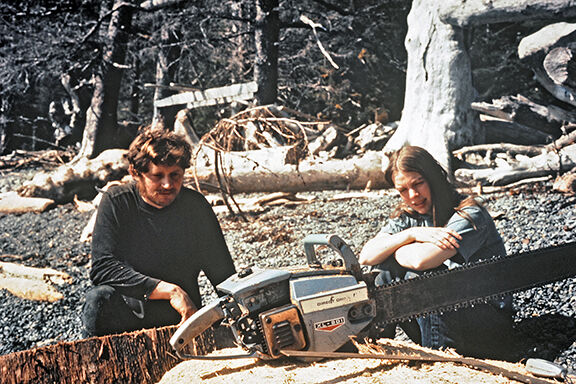 John and Ginger Davidson with their chainsaw on the beach at Driftwood Bay. John could not only cut trees and firewood with his chainsaw – he also had an attachment that allowed him to cut lumber. 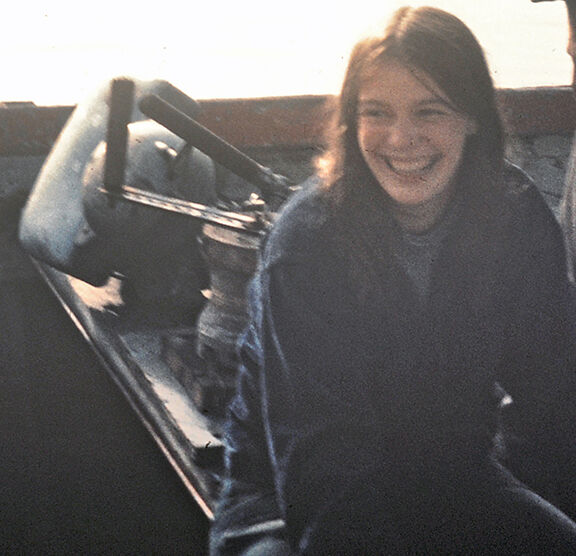 Once in Seward, Carolyn Davidson was known as “Ginger.” Here she is at Driftwood Bay, circa 1972. 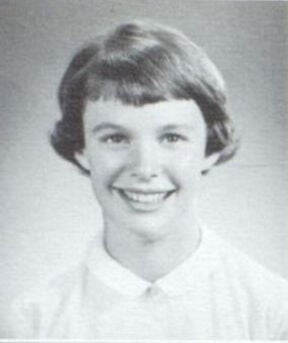 Carolyn Higgins, nicknamed “Higgy” in her high school yearbook. She graduated in 1964 from B Reed Henderson High School in West Chester, Pennsylvania. 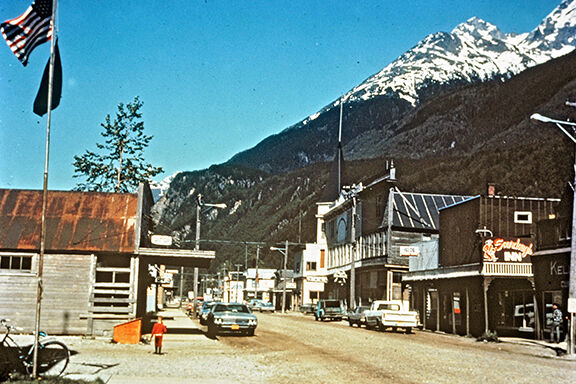 Main Street Skagway circa 1970. Notice that the street isn’t paved. The town had plans to pave the streets shortly before the 1964 Good Friday Earthquake. After that disaster there were other priorities.

John and Ginger Davidson with their chainsaw on the beach at Driftwood Bay. John could not only cut trees and firewood with his chainsaw – he also had an attachment that allowed him to cut lumber.

Carolyn Higgins, nicknamed “Higgy” in her high school yearbook. She graduated in 1964 from B Reed Henderson High School in West Chester, Pennsylvania.

Main Street Skagway circa 1970. Notice that the street isn’t paved. The town had plans to pave the streets shortly before the 1964 Good Friday Earthquake. After that disaster there were other priorities.

Part 2 in a Series

The Fearless, the Curious, the Restless, the Bold

Frontiers attract the fearless, the curious, the restless, the bold. They come into the country, these adventurers, some seeking excitement, other searching for solitude. A few find the kind of “gold” they think they are looking for. Some pack up and leave, disillusioned and empty-handed…most who remain on the frontier finish out their lives oddly ennobled. The survivors carry forever the pride of having tested themselves and passed; they savor the satisfaction of having accomplished something greater than they had ever imagined.

Ardyce Czuchna-Curl in "Mountains and Rainbows: Modern Pioneers – How Alaska Changed Their Lives."

I’m at a table, sitting in an old church pew at the Resurrection Art Coffee House and Art Gallery in Seward, Alaska. Locals call this place the Res or Res Art. It’s my unofficial office, where I do much of my writing, often at this very table. I’m joined this day by a friend, Michael Woelkers. He staked land in Day Harbor, built a cabin, and has traveled there frequently since 1971. His brother, Fred, also has land and built there. The Woelkers knew John and Carolyn Davidson, as did several others along that coast.

Res Art is the perfect place to meet and talk about John and Ginger Davidson. The building was built as a church by the local Methodists in 1917. After World War II they sold it to the Lutherans and moved an old Army chapel from Fort Raymond, an Army outpost a few miles north of town, to their property next to the Res. Over 20 years ago, when the Lutherans built a new church nearby, Mike and Deb Olson bought this historic building and turned into an art gallery and coffee house. Mike and Raylene O’Connor bought it next, and now it’s owned by Micheley Kowalski and Mike Stewart. Each owner has made improvements, and now there is a bakery in the basement. It is one of many old buildings – by Alaska standards – still standing in Seward and a prime social gathering point for locals.

This May 20 in 2018 the coffee shop is full with some locals and lots of new hires for the upcoming tourist season. The excited anticipation of Memorial Day and the initial influx of visitors is evident in the loud conversations all around us.

I’m telling Michael how I started my research into John and Ginger several years ago but found little information. I decided that, unless I could locate and contact their families, I’d move on to other projects. As the internet became more content rich, I began my quest again.

On Ancestry.com I found a memorial to John, Ginger, and Jesse at a site called Find A Grave. A woman had left a flower icon there, so I sent her an email query with my contact information. That woman turned out to be Megan Higgins, Ginger’s niece. Her father Geoff is Ginger’s younger brother. With her father’s permission, she sent me files of digital information, photos of her aunt, and other fascinating information. Soon I talked on the phone with both Megan and, later, Geoff. Megan never knew her aunt, but Geoff provided me with relevant and revealing information about his sister.

I also found a genealogy page on Ancestry.com listing a John Davidson with the correct birth and death dates. I sent out another email query to the owners of that site. Finding Ginger’s kin and getting their cooperation for the story was wonderful, but it wasn’t enough. Unless I could make the same contact with John’s family, I couldn’t really move forward.

That was the essence of the conversation Michael and I had at Res Art that May day in 2018, when we were interrupted by my cell phone. With all the noise around us, I could barely hear the man’s voice. It turned out to be Paul Davidson, John’s older brother. As we talked, I could see the amazement in Michael’s face. Incredible luck or providential fate?

“We are pretty excited about the prospect of getting this story out,” Paul and his wife, Ruth, emailed me later. “Those two were remarkable and the story is fascinating. For some reason I inherited most of their written material and all of their slides.” Through Paul, I was able to contact John’s younger sisters, Mary and Debbie. But that was only the beginning.

Of the people in Seward at the time who knew the couple, most are at least in their 70s today, if still alive. I decided I’d better locate and interview those individuals quickly. That took me on an entirely new quest. Most were more than willingly to talk; a few others, for reasons of their own, wanted nothing to do with the project.

John and Ginger came to Alaska from Pennsylvania, separately, back in the late 1960s for quite different reasons. Those who knew them say they met in Seward. The two were alike in some essential ways. They were quite different as well. That blend seemed to be a perfect fit.

Carolyn Louise Higgins – nicked named Ginger in Seward – was born in Dover, Massachusetts, daughter of Ralph Percy and Catharine Belle (Hallett) Higgins. Her father, a defense lawyer specializing in insurance cases, was born in Limestone, Maine. Before getting his law degree from Boston University, he served in the South Pacific during World War II with the Army Air Corps as a pilot in the 22nd Bomb Group, Fifth Air Force. He had been wounded in combat.

Carolyn was raised in rural Pennsylvania. She was not a robust child and suffered from anemia. She was an academic, a quick learner, and quite intelligent, especially adept at math and science. Nicknamed “Higgy” at B Reed Henderson High School in West Chester, where she graduated in 1964, her friends described Carolyn as happy-go-lucky, a camera bug, and known for “those sloppy chemistry experiments.” She enjoyed midnight hikes, concocted exotic desserts, and often responding, “Really?” She was a member of the Engineering and Technical Society Council of Delaware Valley. At one of their science fairs, she won a prize for her experiment in electrophoresis, a study of the movement of charged particles in a fluid of gel under the influence of an electric field.

Between her sophomore and junior year of high school, she got an internship at Harvard University working with a graduate student experimenting with rats. Examining the formula he was using to interpret the data, Carolyn determined the math was wrong, corrected it, and handed him her work. As one can imagine, that didn’t sit well with him. He took the issue with his academic advisor who reexamined the math and told him that Carolyn was right.

These were the days when young women were not welcome within the male dominated fields of science and math. “That wouldn’t have slowed her down a bit,” Geoff noted. “She was very independent, absolutely fearless, with a good spirit of adventure,” he added. One time while Geoff and his sister Janet were camping out in the yard, a bull escaped from a nearby farm and wandered nearby. Their father came running warning them to get in the house. Carolyn ran out of the house, chased the bull down, and calmly led it back to its owner.

One of Carolyn’s friends got her interested in Quakerism. The family occasionally attended the local Methodist Church, but Carolyn introduced them to Quaker spirituality and the whole family converted. She often butted heads with their father during her high school years, Geoff recalled, not uncommon with most teenagers.

After one argument, however, Carolyn went to her bedroom, slammed the door, opened the window, threw her sleeping bag out, crawled out herself, and slept in the woods for a few days. This was in winter. Her parents were worried sick, Geoff said. They didn’t know where she was. Her father had to go to the school to learn that she was okay.

“She was her own person,” her brother remembers. “She made up her mind about what she was going to do and not going to do.”

Carolyn graduated from Allegheny College in Meadville, Pennsylvania with a degree in psychology. She studied one summer in Germany, and later did a semester at the University of Edinburgh and said she wasn’t impressed with the curriculum there. While at Allegheny College she would hitchhike to Cincinnati to do experimental theater. At one point she told John, “Don’t tell Mom and Dad, but I’ve hitchhiked about 5,000 miles around the country.”

At 22 she was 5 feet 6 inches and about 100 pounds. “She never looked her age,” Geoff recalled, “which was dispelled when you talked with her because of her vocabulary. But she had trouble getting served in a bar. Whenever she produced an ID they thought it was fake.”

The man she met in Seward and married in 1969, John “Jack” Davidson, was about 5 feet 11 inches and 160 pounds, an Air Force veteran, not much interested in the classroom, but quick to learn whatever he wanted to know. He could design and make anything with his hands with whatever tools he had. John, too, was an individual who followed a different drummer. And just like Carolyn, his family describes him as a fearless adventurer.

Children of the 1950s and 1960s, they both had an impulse lead a simple life and get back to the land.

Doug Capra is the author of “The Spaces Between: Stories from the Kenai Mountains to the Kenai Fjords.” In addition to many Alaska history articles, he wrote forwards for two reprints of books by American artist Rockwell Kent. He has written poetry, essays and plays. His most recent play titled “A Social Distance” will be published in Cirque magazine this summer. Earlier parts of this series can be found online at sewardjournal.com. People who knew the Davidson or who have photographs, information or letters, can contact the author at capradr@yahoo.com.