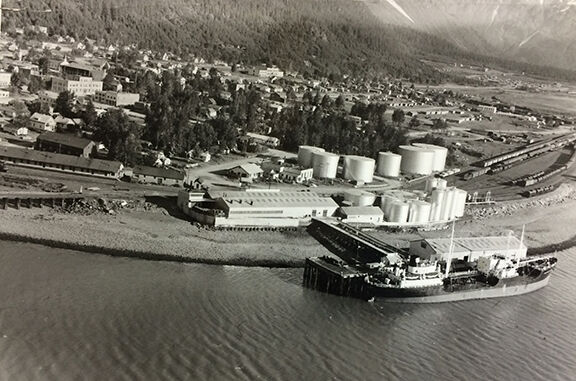 The Standard Oil tanks along the shores of Resurrection Bay, 1950. 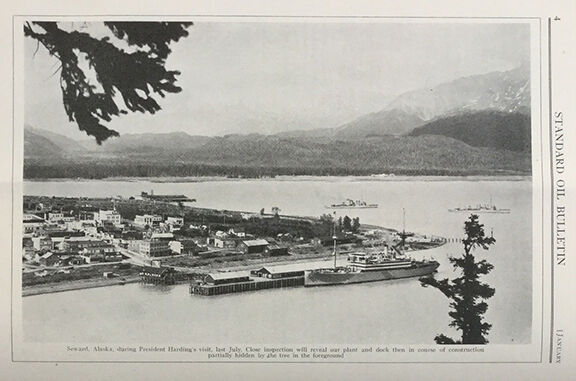 The U.S.S. Henderson – the ship that carried President Harding to Alaska -- tied up at the Seward wharf with two destroyers in the background. This photo led the article in the January 1924 issue of the Standard Oil Bulletin. 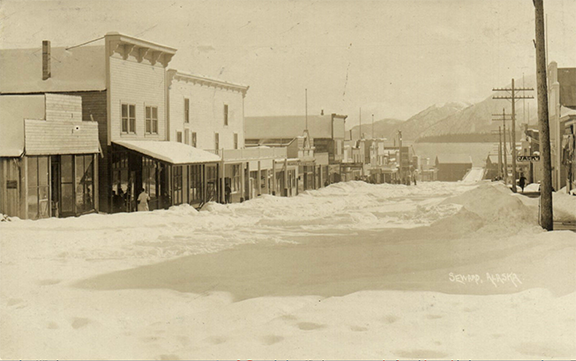 Main Street Seward in winter, circa 1920. 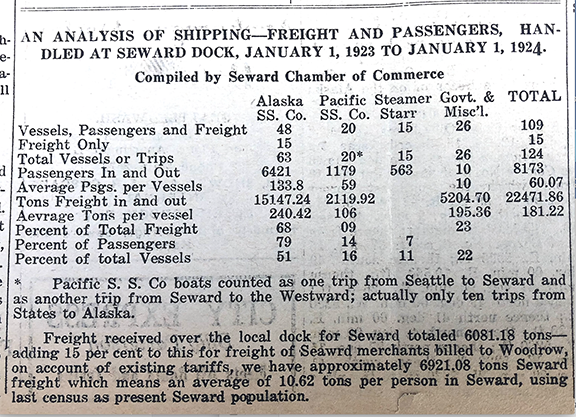 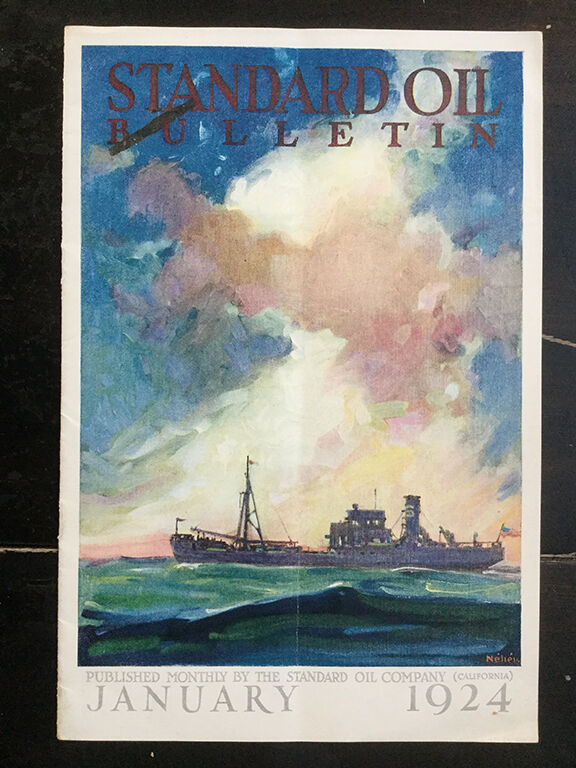 The cover of the 1924 Standard Oil Bulletin showing their tanker, the Standard Service most likely in Resurrection Bay. 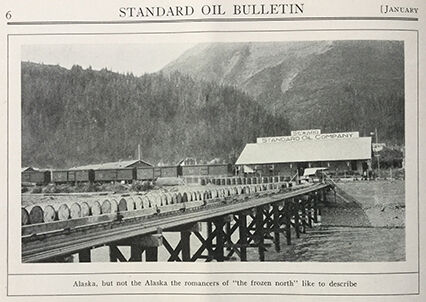 A Photo from the January 1924 issue of the Standard Oil Bulletin of their Seward plant taken from the end of its dock.

The Standard Oil tanks along the shores of Resurrection Bay, 1950.

The U.S.S. Henderson – the ship that carried President Harding to Alaska -- tied up at the Seward wharf with two destroyers in the background. This photo led the article in the January 1924 issue of the Standard Oil Bulletin.

Main Street Seward in winter, circa 1920.

The cover of the 1924 Standard Oil Bulletin showing their tanker, the Standard Service most likely in Resurrection Bay.

A Photo from the January 1924 issue of the Standard Oil Bulletin of their Seward plant taken from the end of its dock.

On February 13 the Seward Gateway noted on its front page, “Spring is coming rapidly, the days becoming so long as to get apparent. Another blizzard or so and our winter will be over. Seward has more snow this year than for many years past.” The local Chamber of Commerce had compiled statistics about water transportation service to Seward and presented the data in a concise table. A large photo on the front page highlighted the American ski-jumpers who would represent this country in Olympics happening in France. Life seemed to be getting back to normal. A section of the American College of Surgeons meeting in Texas told Americans that today’s children were expected to live an average of twelve years longer than their grandmothers. A Chicago doctor reported that today’s married men were expected live about twelve years longer than single men.

Before the Great War, optimism and trust in scientific progress had prevailed. The sinking of the Titanic in 1912 had put a damper on that and for years a devastating war left people numb. Then came the year 1919 with bombings, strikes, protests, and general civil unrest. Add to this all the technological innovations that usually come with war. Even though the world would never be the same, Warren G. Harding ran and won the Presidency in 1920 on the slogan “Back to Normalcy.” Women got the vote that year and may have been the deciding factor in his victory.

According to Mary J. Barry’s “Seward, Alaska - History of the Gateway City,” during railroad construction years, the Seward Chamber of Commerce sought out Standard Oil, advising them of the advantages of building a plant in Seward. In May 1922 a company assistant district sales manager with an engineer arrived in town to considere the feasibility of setting up a site. They were impressed with Seward could see the possibilities of its value as a staging area for shipping oil products throughout this part of Alaska. Conferring with the Alaska Engineering Commission (AEC), the group in charge of railroad construction, they selected a site along the shore near Adams Street and Railroad Avenue. Their vessel, the Standard Service, arrived in June 1923 with product and engineers to install a boiler house, five oil tanks, other buildings, and a dock.

The plant was up and running by September with a capacity of three-quarters of a million gallons. That day a ten-rail car shipment of petroleum left Seward to customers on the Tanana and Yukon Rivers. From there it was shipped to the Arctic Circle. Other wharf products headed all along the Alaska coast included Red Crown Gasoline, engine distillate, Pearl Oil, lubricating oils and greases, and commercial fuel oil, including diesel.

While the plant was in construction phase, in July 1923, the Alaska Railroad was officially completed and President Harding visited the territory to drive in the golden spike at Nenana connecting the north and south bound tracks. Harding’s fleet had anchored in Resurrection Bay and the President took a stroll along Seward’s Main Street with his entourage. Locals had a chance to meet him and Vice President Calvin Coolidge. Not long after visiting Alaska, on Aug. 2, Harding died suddenly in San Francisco on his way back East. His death shocked the world, the nation, and especially the small towns like Seward he had visited during his trip across the country. Now Coolidge was president, and it seemed incredible to many ordinary citizens that they had actually met two presidents.

In the Feb. 13, 1924, issue of the Seward Gateway, oil dominated the discussion – and it wasn’t all good news. In a speech two nights earlier, President Coolidge finally promised a serious inquiry into the “wisdom” of the leasing of oil lands by Harding’s Secretary of the Interior, Albert B. Fall. That sale became known as the Teapot Dome Scandal, and Fall would eventually end up in prison. Right next to that story the headline read “Standard Oil Co. Gives Publicity (to) Seward Station”. Oil had come to Alaska and maybe in even a bigger way. On Oct. 7, 1922 the Nevada State Journal (Reno) reported a Seattle newspaper story – “The Standard Oil company will begin in two weeks to drill an exploration well for oil in Cold Bay district, Alaska – a place called Kanatak. Word was they had drilled to 1,200 feet. A year later, Standard Oil still prospected in that area, according to a story out of Anchorage on March 22, 1923. While visiting Los Angeles, Louis Margules, a restaurant and hotel owner from Seward, spread that news. “Indications are that there is a lake of oil under southeastern Alaska,” he told the June 18 Los Angeles Times, “and if we bring in a gusher there will be another Alaska stampede.”

Seward had the Standard Oil plant and now they got some prominent publicity. The January 1924 issue of the Standard Oil Bulletin arrived in town and it featured a seven-page spread about the corporation’s new facility along Resurrection Bay – with 100,000 copies distributed throughout the country. Now the world would know about Seward – the up-and-coming town. The cover showed the Standard Oil tanker Standard Service, probably in Resurrection Bay. The lead article photo showed the U.S.S. Henderson – the ship that carried President Harding to Alaska – tied up at the Seward wharf with two destroyers in the background. The publication represented, “The best publicity ever given to Seward,” the newspaper reported – thanks to C.E. Moultray the local manager of the plant who had gathered the data and photos for the article.

“The text gives a good write-up of Seward,” the Gateway wrote, “and also a sketch of the Alaska railway, telling of the many industries using Standard products. One main advantage of this Seward substation was price reductions. In 1922 gasoline in town sold for 55 cents a gallon; now it was only 18.5 cents. On the Yukon River in 1922 it sold for a dollar a gallon; now it was about 50 cents. This was a considerable savings since the article estimated that the average consumption of fuel in Alaska was two pounds per ton mile – one ton-mile is the equivalent of shipping one tone of product, one mile. A revenue ton-mile refers to a metric used in the freight, shipping, and transportation industry. Usually reported by railroad companies, a revenue ton-mile measures how much revenue a company makes per volume of freight transported.

The price reduction was mostly due to, “the change from transportation in drums and cases from Seattle (a distance of 1800 miles through the Inside Passage, requiring sixty days for delivery) to transportation in bulk by modern tankers, which supply the distributing plant that assures the delivery of Standard Oil products to the most distant customer within two weeks.” Now with oil on hand in Alaska and a shorter delivery time, businesses didn’t have to tie up their capital in a season’s supply of oil.

Mines needed oil for their equipment to say nothing of all the gas boats on rivers, bays, and lakes as well as autos, trucks, and tractors. The most successful mines operated diesel-powered dredges using Calol Diesel Oil for fuel and Zerolene for lubrication. The pioneer farms all along the Railbelt needed gas and oil for their machinery. These days everyone needed gas and oil products. “The trapper, who in his isolated cabin requires Pearl Oil for light during the long Arctic night,” the article noted, “also needs Household Lubricant for his guns and traps. In the summer, Red Crown Gasoline and Zerolene are required to propel the small river-boat to the fur market, returning laden with supplies.” To the eastward along Prince William Sound and to the west there were small and large fishing-boats, canneries, halibut schooners, cold-storage plants, herring-salteries, cod-fisheries, whaling stations, fur seal rookeries and fox farms.

Over the years the Standard Oil plant expanded. New buildings were added in 1925, and more oil storage tanks in 1937. The 1964 Good Friday Earthquake destroyed the entire facility and the exploding tanks produced smoke, soot and a blaze that caused at least one ship out in the bay to report to the world, “Seward is Burning.”

The years 1915-1923 during the construction of the Alaska Railroad brought much change to this small town along the shores of Resurrection Bay. Seward watched with curiosity and concern as what had been a tent city along Ship Creek 130 miles north, began to grow and compete with them for settlers and businesses. For some it wasn’t an easy pill to swallow. Before 1915, Seward had been the largest town in this part of Alaska along with Valdez and Cordova.

The new Standard Oil Company plant along Resurrection Bay represented a major advantage for the town, and already some were leveraging that gain. The Jesse Lee Home in Unalaska was planning to move, and what better place than Seward. Unlike Valdez and Cordova, it had the tracks all the way to Fairbanks. And unlike Anchorage on the shores of Cook Inlet which froze up in winter, Seward had an ice-free port and significant steamship traffic as well as a fleet of smaller vessels providing transportation westward.

In 1925 the Jesse Lee Home would move to Seward.

Doug Capra lives in Seward with his wife, Cindy. He’s the author of The Spaces Between: Stories from the Kenai Mountains to the Kenai Fjords, and the foreword to the reprint of a special edition of Wilderness: A Journal of Quiet Adventure in Alaska published by Wesleyan University Press in 1996.