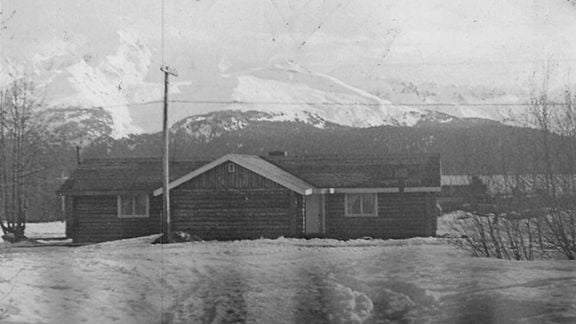 The original building that sat on the site of the current American Legion Seward Post 5. It was purchased from the Army Enlisted Association after the WWII. The current structure was built around the old building and part of it remains as the old bar located downstairs in the current building. 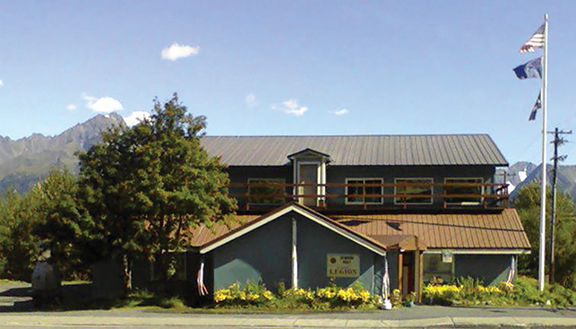 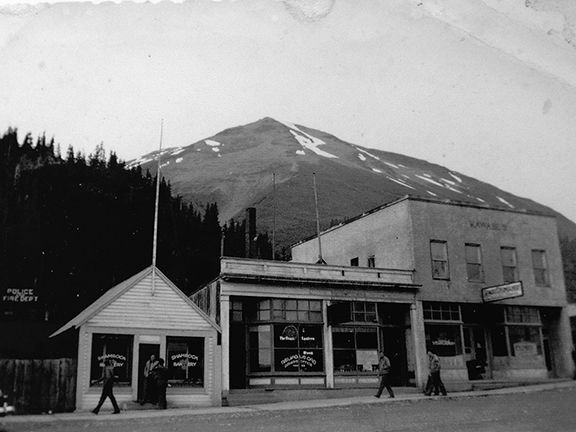 A building on Fourth Avenue that used to be a bakery. The Legion moved into the building 1934, but the building burned shortly afterward. 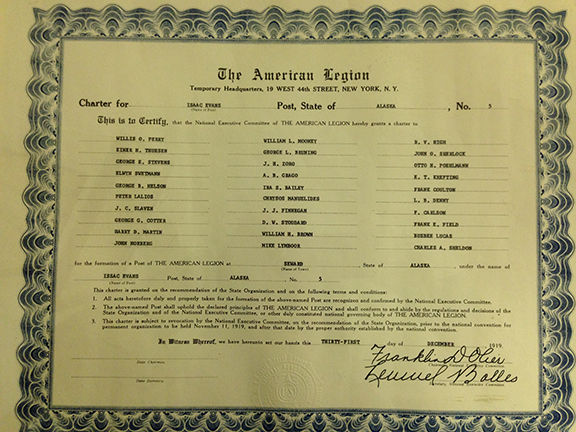 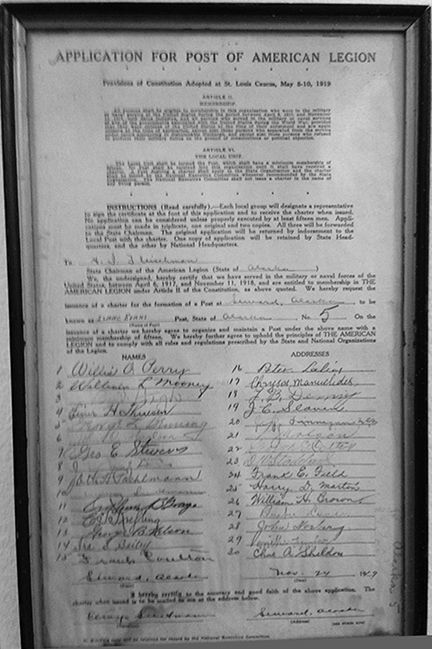 This image is of the original application submitted to form the Seward American Legion Post. 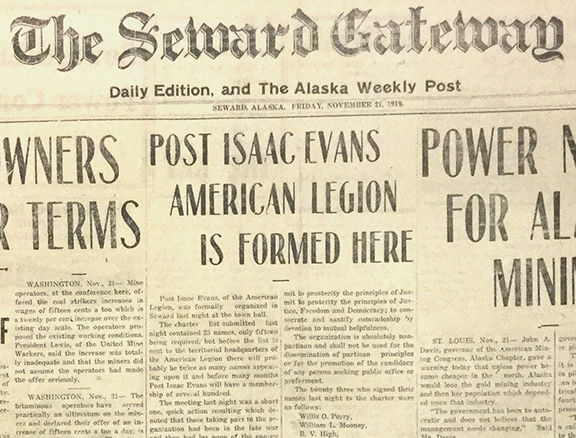 Front page of The Seward Gateway on November 19, 1919, announcing the plans to form an American Legion Post in Seward.

The original building that sat on the site of the current American Legion Seward Post 5. It was purchased from the Army Enlisted Association after the WWII. The current structure was built around the old building and part of it remains as the old bar located downstairs in the current building.

A building on Fourth Avenue that used to be a bakery. The Legion moved into the building 1934, but the building burned shortly afterward.

This image is of the original application submitted to form the Seward American Legion Post.

Front page of The Seward Gateway on November 19, 1919, announcing the plans to form an American Legion Post in Seward.

A hundred years ago this week, on November 19, 1919, The Seward Gateway announced on its front page “WILL ORGANIZE AMERICAN LEGION HERE TOMORROW.” The meeting would be held at 8 p.m. at the town hall, the old Alaska Railroad building on the site of present-day city hall. The newspaper urged that all former service men, Army, Navy, etc., are asked to turn out and show the remainder of Alaska and those in the states that in everything the Northerners have done, they have gone over the top and will perfect an American Legion here that will be a hummer.

To go over the top was an expression that came out of the Great War itself. For an attack, soldiers in the trenches were ordered to climb up, over and out of their protection and go over the top wall of the trench. This often meant exposing themselves to fierce artillery, poison gas and/or machine gun fire. In civilian lingo, the expression meant to do more than just one’s patriotic duty; it meant to go above and beyond what was required or even expected.

Below the Nov. 19 article another headline announced, “AMERICANS AT ANCHORAGE.” A week earlier, the newspaper had noted that an “Americans” organization had been started in Juneau with Alaska Governor Thomas Riggs, Jr., as its president. The purpose of the group was to head off the radical wave people believed threatened to take over the country. The “Americans” vowed to fight attempts to change our form of government and to combat propaganda. This was especially aimed at the 1917 Russian Revolution, specifically at Bolshevism. The newly formed group invited foreigners to join and promised to help and assist all aliens, who have full faith in American principles, to become citizens. They expected every patriotic Alaskan to join the organization, and they hoped other towns would form their own “Americans” group.

On Nov. 20, 1919, the Seward Gateway again announced the meeting to form a local American Legion post. Many in Seward had been wondering why definite steps had not been taken towards the formation of an American Legion here. The first steps are to be taken tonight at a meeting of the former soldiers, those of the Navy, or any other branch of the fighting service of the United States. In Seward there is a great nucleus for this organization, many who have distinguished themselves in various ways in the fighting overseas.

A headline in that same issue shouted, “FIND BIG RED PLOT.” Agents in Philadelphia had uncovered a Bolshevik plot to, “slay all officials with explosives to be sent through the Christmas mails.” A “round-up of Reds” was underway with many arrests expected. In other news, a miners strike occupied Tacoma; foreign powers had decorated 15,384 American officers and men, including 11,000 who had received the French Croix de Guerre; and Wilson’s League of Nations was in trouble in the U.S. Senate.

The new organization’s charter listed twenty-three names even though they only needed fifteen. They expected the number to double within a few months. Elwin Swetmann became temporary chairman and D.W. Stoddard, temporary secretary and treasurer. The group selected a committee to draw up bylaws and a constitution. Those eligible for membership could be from any branch of service, but had to be “under arms, at the front, in camps or on duty elsewhere from April 6th, 1917 to Nov. 11, 1918, or those of allied nations.”

The first American Legions were formed specifically for veterans of the Great War. The few union Civil War soldiers had their own Grand Army of the Republic (GAR), and Confederate veterans had their groups as did the more recent Spanish-American War soldiers. From today’s perspective it might seem these new American Legion groups were being too selective. But remember, in 1919 there was yet to be a World War II, Korean War, Vietnam War, Gulf War, and Afghanistan and Iraq War. Today’s American Legions are open to all military veterans, and sons of veterans who served since Dec. 7, 1944.

The purpose of Seward’s Isaac Evans Post – named after a beloved Seward U.S. Deputy Marshal who was murdered in town that same year— was “to uphold and defend the constitution (sic) of the United States of America; to maintain law and order; to foster and perpetuate a one-hundred-per-cent Americanism; to preserve the memories and incidents of the association in the Great War; to include a sense of individual obligation to the community, state and nation; to combat the autocracy of both the classes and masses; to promote peace and good will to commit to posterity the principles of Justice, Freedom and Democracy; to consecrate and sanctify comradeship by devotion to mutual helpfulness,” reported the Gateway. “The local post would be absolutely non-partisan when it came to politics and would promote no candidacies,” was reported as well.

Why did they name the post after murdered U.S. Deputy Marshal Isaac Evans? He had no military background and did not fight in the Great War. Had he lived; Evans wouldn’t have been eligible for membership. Evans’s had been gunned down by 19-year-old William Dempsey in early September and died a few days later. The marshal and his wife were beloved Seward residents, active in various organizations.

His murder was fresh in Seward’s mind and the trial of his murderer was happening as the veterans met. In a resolution passed the evening they organized, they explained that the post’s designation was to honor and perpetuate the name of one whose daily life typified those ideals of Americanism fostered and sustained by the constitution of the American Legion; a man whose unselfish devotion to duty and to the enforcement of law and order finally exacted from him the supreme sacrifice.

These soldiers of the Great War recognized that – although not a military soldier – U.S. Deputy Marshal Isaac Evans had been a combatant in the war of law and order and had given his life for his country. With the violence of 1919 on their minds, members of Seward’s new American Legion Post understood that law enforcement officers like Evans stood between anarchy and the rule of law. On Nov. 13, the Seward Gateway reprinted an article from the Juneau Empire reminding citizens that three Federal officials had been murdered in Alaska during the last year. The first was 36-year-old U.S. Deputy Marshal Clyde D. Calhoun of Craig who had been gunned down on Feb. 12. Calhoun had just married a Craig schoolteacher the year before. Evans had been the second. Recently, Asst. District Attorney Ragan had been murdered.

“These men died for their country and fellow men as heroically as did soldiers on the battlefields of France,” the Juneau Empire said. “Sometimes we are apt to forget the plodding man in obscure place who goes about performing his duty from day to day. Somebody has said that the greatest hero is not the man to whom comes the opportunity to do something so dramatic in its nature that it attracts the attention of many, rather (it is) the man who in the routine and humdrum of his daily life does his duty to his country, his community, his family, his associates, his fellow men. It is much the more difficult task…Those men whose routine and humdrum it is to enforce the laws the people have made for their government are consistently exposed to the caprices of the mad and vengeance of the vicious. They know it, and they face it with calmness.”

Seward’s Post 5 American Legion has remained an active organization for the last 100 years.

The Post’s centennial celebration will be held on the date of the original charter award, Dec. 31.

Doug Capra is the author of The Spaces Between: Stories from the Kenai Mountains to the Kenai Fjords. The full story of U.S. Deputy Marshal Isaac Evans can be found in that book. The draft of a new book he’s writing about American artist Rockwell Kent’s 1918-1919 stay on Fox Island in Resurrection Bay can be found at https://rockwellkentjournal.blogspot.com/.