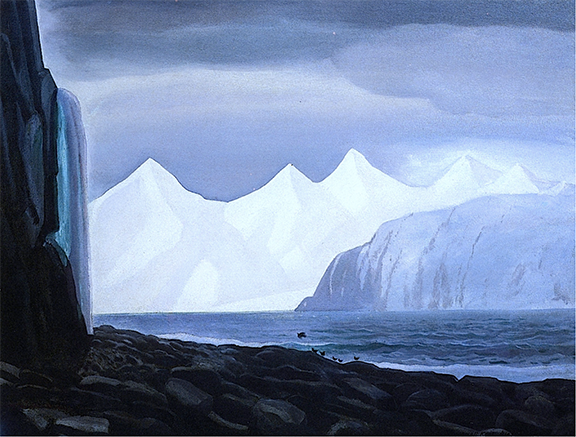 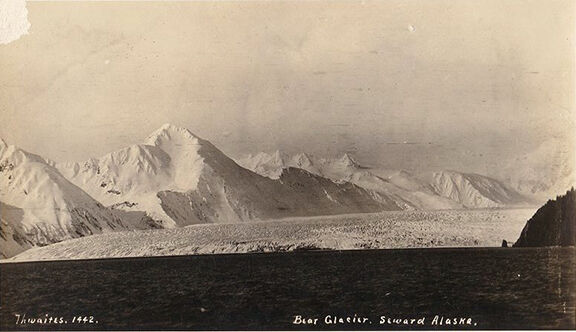 Photograph of Bear Glacier by John E. Thwaites, circa 1923. Kent met Thwaites the day he arrived in Seward – Aug. 24, 1918. A former mail clerk aboard the steamship Dora, Thwaites had traveled much of Alaska’s coast, and was a partner with Sylvia Sexton in a Seward photography business. Resurrection Bay Historical Society. 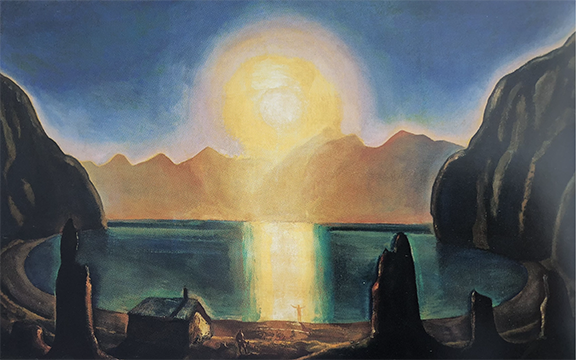 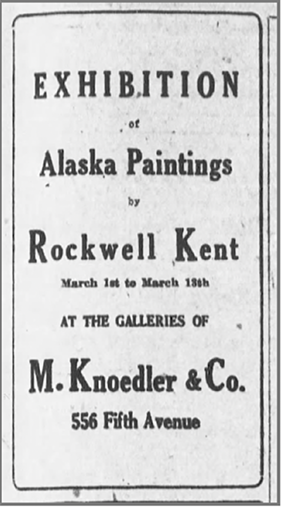 Photograph of Bear Glacier by John E. Thwaites, circa 1923. Kent met Thwaites the day he arrived in Seward – Aug. 24, 1918. A former mail clerk aboard the steamship Dora, Thwaites had traveled much of Alaska’s coast, and was a partner with Sylvia Sexton in a Seward photography business. Resurrection Bay Historical Society.

Part 8 in a Series

With the success of his pen and ink exhibit in May 1919 – combined with the critical acclaim he received from “Wilderness” and his Alaska paintings in 1920 – Rockwell began his rapid climb to fame and financial stability. But success can be a two-edged sword, as critic Henry McBride cautioned him in a May 11, 1919, New York Herald review. “Artists have a way…of drinking hope from the evidence of sales, even the sales of others; but they must be warned again that such thoughts are evil, and must be put firmly aside.” McBride recognized something he called “psychological” within the public mind. “The indifferent public had melted and was buying Kent’s drawings.” Rockwell Kent would now undergo the severest test of all – public success, McBride predicted. “It seems a time for his friends to stick closer to him than ever.”

McBride was correct. The public and even the critics praised Kent’s book and Alaska paintings, and McBride felt obligated to warn him further on March 7, 1920, “If by any chance these lines should catch the eye of Rockwell Kent, that gentleman is begged to desist to read no further, for this little notice is to concern itself with Mr. Kent’s own paintings now being shown in Knoedler’s and it may degenerate into something laudatory. In fact, if Mr. Kent be wise, he will read none of the notions that appear in any of the newspapers, for all of them will be laudatory, and too much laudation, like too much taffy, is bad for the young.”

McBride did admire Kent’s work, but this review was a tease and both Kent and the critic knew it.

We can be relatively sure of three things: First, Rockwell Kent read these words. Second, Henry McBride knew he would read them. Third, nearing 40 years old and balding – having faced what might be called his mid-life crisis on Fox Island – Rockwell Kent appreciated being called young. McBride continued, “The young – and I call ‘em young up to 35—should read only the bad notices. Bad notices are apt to have ideas in them, and besides are better discipline. Some artists pretend they never read notice of any kind…and possibly young Mr. Kent actually practices what these artists preach. In that case he is safe for the present.”

McBride said he wasn’t seriously concerned about Mr. Kent being spoiled by all this praise. Knowing the artist’s affection for German culture, he referred to one of Kent’s favorite authors. German romantic poet and writer Johann Wolfgang von Goethe received tremendous public admiration all his life and he had turned out fine, so Mr. Kent should survive all this praise. Convinced Rockwell would be reading this, McBride added in parenthesis, (“Gee! Go away, Rockwell, you really mustn’t read this).”

Despite the warnings, McBride was willing to let Kent have all the sugar plums he wanted since, “He appears to be going to get them anyway.” There was something heroic about Kent, about his adventurous spirit, his charisma, and vibrant personality that merged into his paintings, McBride noted. It was a mysterious essence that, “more than any other artist that we have…brings out his fellow painters from their dens…’An exhibit by Rockwell Kent? Sure, let’s go see it’”

Kent’s teacher and mentor, Robert Henri, and his Group of Seven, their students and Kent’s friends such as Edward Hopper and George Bellows – as well as the New York art world in general – were curious about what he had done. Though he could navigate it well, in many ways he didn’t always fit into the avant guarde Bohemian city culture of Greenwich Village. He would later venture upon exotic excursions to Tierra del Fuego and Greenland. He flitted in an out of that urban world between his trips to Newfoundland and Alaska. He called the city his “gold camp,” a place where he could earn enough money in commercial art to finance his next adventure. But after Alaska, Kent first settled in rural Vermont with his family and later in far Upstate New York where he established a working dairy farm.

Most of the anarchists and socialist artists he associated with in the city didn’t have a clue about the risks he took in Alaska and the terrain he explored later in Tierra del Fuego and Greenland. And few knew the inner man. There was an insecure, vulnerable soul that Kent furiously protected beneath that swashbuckling persona he often projected – but only those closest to him ever got beneath the mask. And underneath the mask he could be brutal.

The unsophisticated public whom McBride gathered under what he calls the “plump lady sympathizers” – were completely “bowled over by their first glimpses of the sun that comes up like thunder over Resurrection Bay in the picture called ‘Pioneers’ and (they) swallow everything unquestionably after that.” But not those more thoughtful art lovers with “sporting instincts” who like to “ponder over the two very different spirits that are still struggling for the possession of Mr. Kent’s soul.” Those art lovers would rather wager as to which spirit will win.

McBride sees two conflicting styles emerging from Kent’s Alaska paintings. The symbolist painting, North Wind – in which a “warm, pink, naked youth scuttles through the atmosphere of an apparently chilly country,” is “nice.” So is the other more modernist painting, Pioneers, as are the William Blake-like pen and inks that are so tragic that contest with those that shout with joy. Some of the more mystical art might suggest to some that Kent has suffered much in life. “Perhaps he did,” McBride says, “Why even the waterfalls froze solid.” Noting all the “foggy mental outpourings of the day that passes as poetry,” McBride urges Kent to move away from his mysticism and get back to realism:

“I think he has a brain that stores up facts and that detaches itself from facts with the greatest difficulty. Mr. Kent interprets, but he interprets realistically. The far north is gaunt and bare. The artist is more emphatic upon that point than any other traveler who has got as far as Resurrection Bay.” All this symbolism and modernism is fine, but what Kent has really captured according to McBride, is what is difficult to seize in these northern latitudes – the light. He also has “genuine instincts for form and color.” For McBride, Kent’s best Alaska painting is the one of Bear Glacier, “a picture of snow and ice and dark water and solid foregrounds: work he has more or less done before, but never so well.”

The critics had noticed Kent’s mystical turn with his Newfoundland paintings in 1915. It became even more clear with his Alaska pen and inks. The influence of Nietzsche and Blake was obvious.  McBride wrote in the May 11 New York Herald, “He has turned over other despairing pages and has gone out alone at night to interrogate the heavens…His exhibitions, within the recent years, have been pretty well looked at by his contemporaries. He has shown paintings of icy waters beating upon the rocky coasts of Maine and of the snows of even farther north, and in these pictures there was vigor, and breadth, and an almost suspiciously easy accomplishment. Then came symbolic mystical compositions, with curious ships on midnight seas, fierce lights beating upon lonely cabins where fate had just been knocking at the door, and constellations of unusual planets dotting all the skies. It was an event to the artists friends that he should have turned mystic.”

The paintings and “Wilderness” merged to create a new image of Rockwell Kent. “Certainly,” McBride acknowledges, “there is nobody else in this country but Kent who steps from island to island like D’Annunzio or who shoots long, slim arrows at the noonday sun.” Gabriele D’Annunzio was the famous Italian war hero, poet, playwright, journalist and adventurer. McBride’s review and others like it, solidified Kent’s reputation as the adventurer-artist in the tradition of George Catlin and John James Audubon, with reminders of risk-taking naturalists like John Muir, whose Travels in Alaska was published in 1915 while Kent was in Newfoundland. There are echoes of Muir in Wilderness, and its probably why Kent read his Alaska book.

It’s one thing to have wonderful reviews – and they kept coming through 1920 – but it’s another thing to have buyers. Most of his pen and inks sold in the 1919 exhibition. The paintings were not selling well. On April 7, 1920, Kent wrote to Lars Olson on Fox Island that it’s “an unfortunate season – just the time of the income-tax returns – and no one was spending money.”

Doug Capra lives in Seward with his wife, Cindy. He’s the author of The Spaces Between: Stories from the Kenai Mountains to the Kenai Fjords, and the foreword to the reprint of a special edition of Wilderness: A Journal of Quiet Adventure in Alaska published by Wesleyan University Press in 1996.

In 1918, New York artist Rockwell Kent and his nine-year-old son embarked on an adventure to Fox Island that would provide the inspiration for…