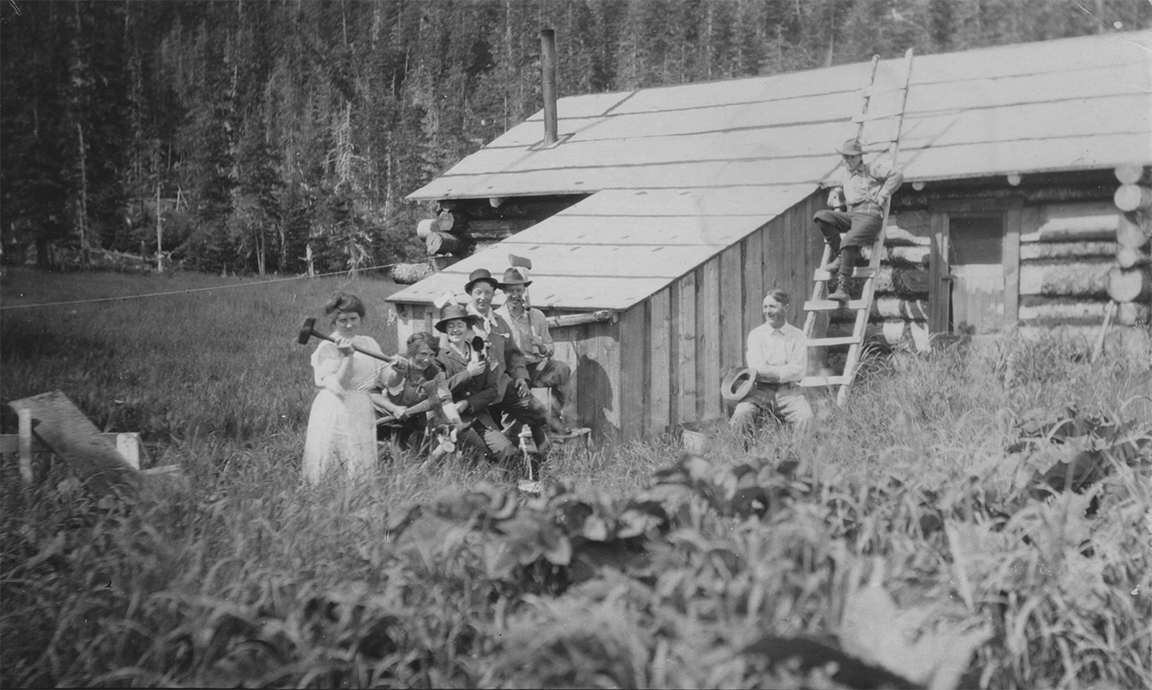 This photo is labeled on the back as the Stagneth cabin on Resurrection Bay. It was taken by Charles Antonio Myers, Seward Mayor during 1915 and 1916. Mayor Myers is the second from the right among the group. The man sitting on bottom of the ladder looks like Jerry Lavarne. Carl Stagneth, who ran the shark operation in Resurrection Bay for Lavarne, may be one of the other men. 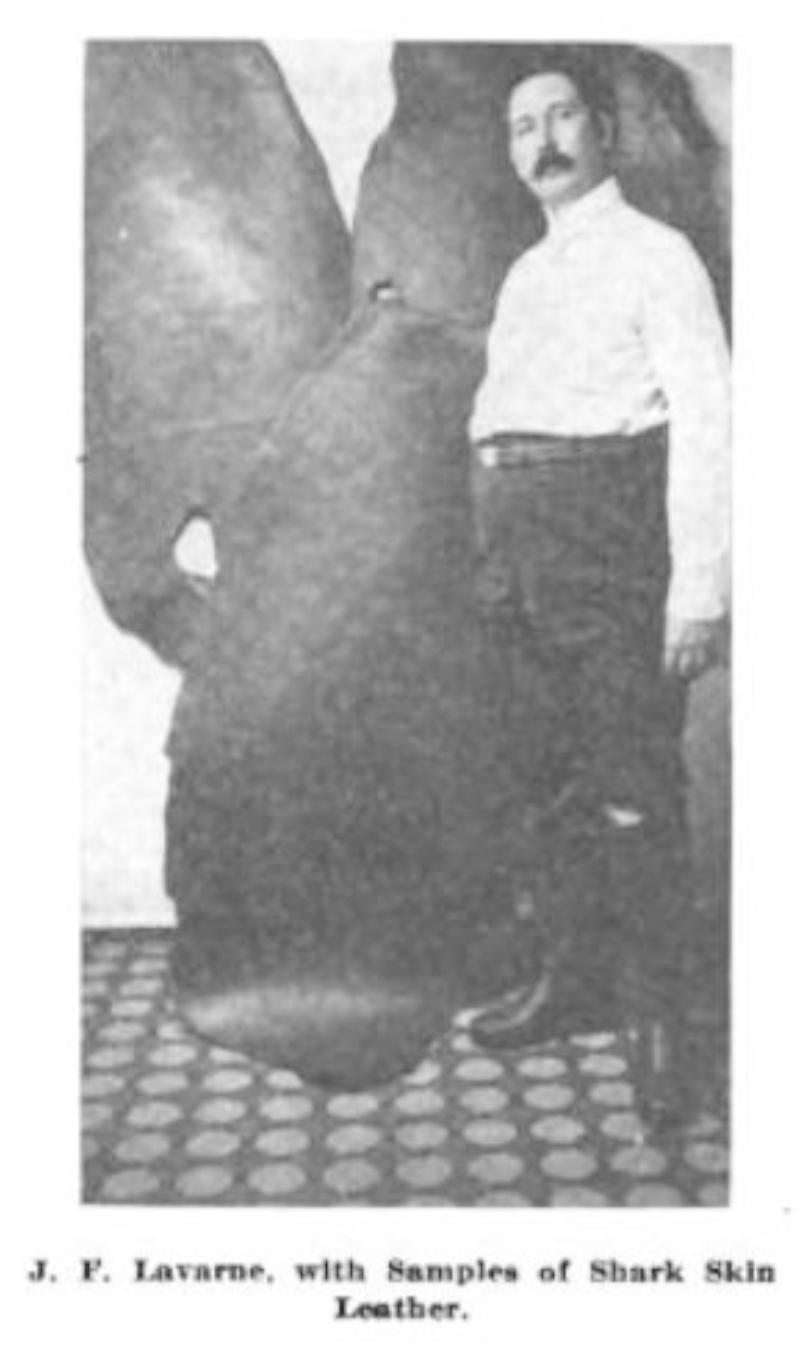 J.F. Lavarne standing next to a shark skin hide, from the January 1920 issue of Pacific Fisherman. 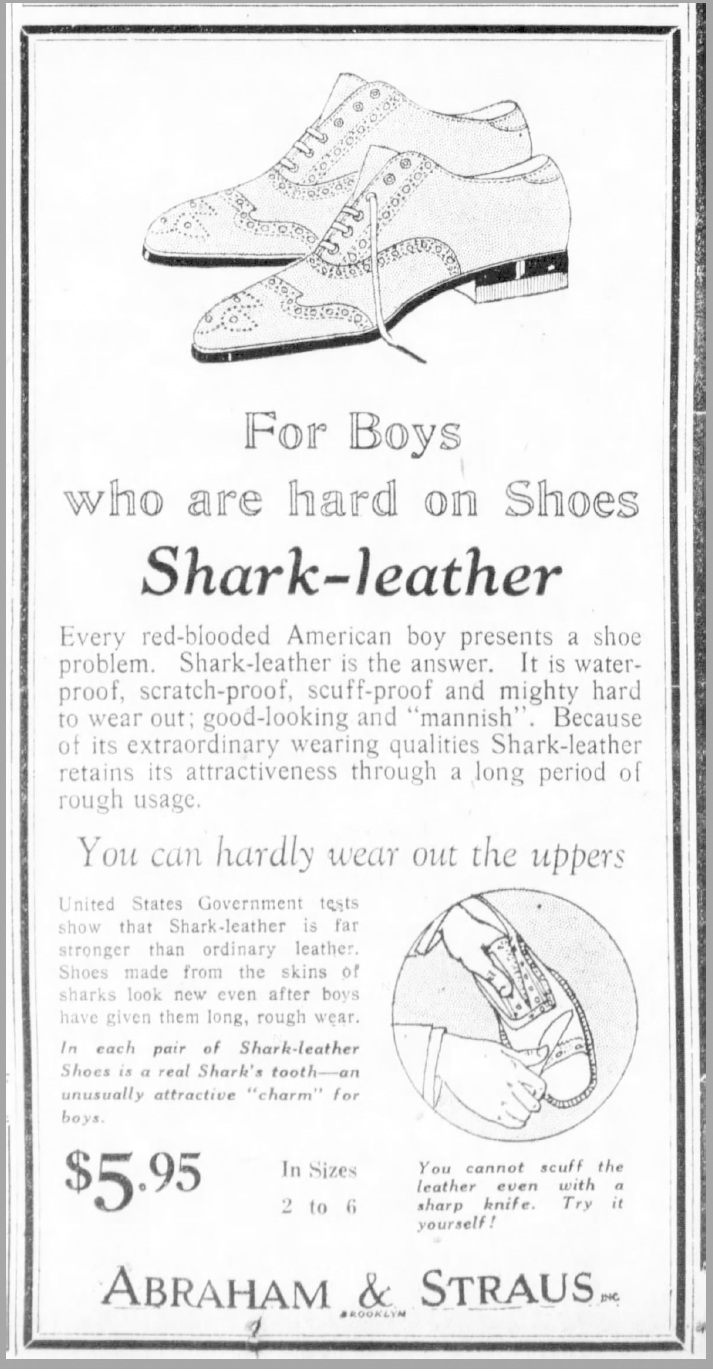 By the mid-1920s marketers had embedded the value of shark skin shoes into the public mind – especially for the average boy who tended to be rough on footwear.

This photo is labeled on the back as the Stagneth cabin on Resurrection Bay. It was taken by Charles Antonio Myers, Seward Mayor during 1915 and 1916. Mayor Myers is the second from the right among the group. The man sitting on bottom of the ladder looks like Jerry Lavarne. Carl Stagneth, who ran the shark operation in Resurrection Bay for Lavarne, may be one of the other men.

J.F. Lavarne standing next to a shark skin hide, from the January 1920 issue of Pacific Fisherman.

By the mid-1920s marketers had embedded the value of shark skin shoes into the public mind – especially for the average boy who tended to be rough on footwear.

Part 1 in a series

In 1918 a tester at the Newark, N.J. tannery owned by the Ocean Leather Company held a 38-caliber revolver and stood ten feet back from a shark leather hide. He fired several shots into the hide without penetrating the leather. A Dec. 12, 1918, feature story in the Tampa (Florida) Tribune told the story and added, “Shoes of which the soles were of shark sole leather, after six months’ use, showed so slightly of the wear that it seemed almost unbelievable. Certainly, no other sole leather known will equal the shark for durability.”

By 1918, the need for a replacement for traditional leather had already found its way to Seward. If you had wandered along the shores of Resurrection Bay during 1917, you might have observed an 18-foot dory with its three-horsepower Evinrude engine anchored off a spot locals called Pleasant Beach. As you watched the vessel at work you might have thought it was longlining for halibut, for that was the technique used here. But if you watched closely, you would have spotted them hauling in sharks.

The Great War and the influenza epidemic brought many changes to the world – social, political and economic. When the war began in 1914 the U.S. was resolute about staying out of a European conflict. Both sides needed to equip their soldiers with straps, belts, gloves, boots and other products made from traditional leather. And the number of horses used in the war resulted in a dire need for harnesses and saddles. Only a month after the war began, the Boston Globe noted on Sept. 11 that the, “Cutting off the raw supply of raw leather from European countries has resulted in an advance of 50 cents a pair in the retail price of shoes.” By Nov. 28 the St. Joseph (Missouri) Observer wrote. “American manufacturers of leather goods are being swamped with orders. Of course, the bulk of this is for saddles for the warring armies of Europe, but there is a great demand for leather novelties which heretofore have been made abroad…American manufacturers had better adopt confidence and patriotism instead of timidity and over-caution as their governing characteristics.”

Sea leather – skins from fish and marine mammals – was not new, but it took second place to leather from cattle and had been used mostly for costly clothing and novelty items. Even before the U.S. entered the war in April 1917, the Bureau of Fisheries had been researching the industry in Europe and urging American businesses to begin processing sharks, other fish, and marine mammals. The Jan. 26, 1917 Reidsville (North Carolina) Review quoted one of the government bulletins, “Shark skins are very tough and durable, and some of them show a beautiful surface pattern which persists in the tanning process. Leather made from the skins of the larger sharks has a very considerable body, and such sharks will be in the greatest demand if experiments of the bureau of fisheries prove as successful as anticipated.”

That kind of reassurance caught the attention of businessmen like J.F. Lavarne. He found a Seward partner, Carl Stagneth, and began harvesting the marine resources of Resurrection Bay. It probably helped during this time that great white shark attacks had increased along the northeast coast of the U.S.  The Philadelphia Inquirer headlined a story on July 15, 1916, “Government To Aid Fight To Stamp Out the Shark Horror.” Beneath it another headline shouted, “Mangled Remains of Shark’s Victim Found in Stream.” On the same day, a Nebraska State Journal titled a story “War on the Sharks Has Been Declared,” noting in the first paragraph that President Wilson met with his cabinet to discuss how to prevent these tragedies and ordered the Coast Guard to play a role as well as the Bureau of Fisheries.

All this gave further incentive for Jerry Francis Lavarne and other entrepreneurs like him to profit off of the public’s fear of and distain for sharks. Lavarne was born in East Templeton, Quebec, Canada on Feb. 22, 1882, descended from an old French family of tanners. At some point he made his way to the U.S. and in 1903 married Margaret Cochrans. Sources say he came to Alaska about 1904, but he seems to have spent his winters in Pittsburgh where he built a tannery and experimented with methods of tanning shark skins, developing a process he called Charadon. Taking part of the Latin name for the great white shark – Carcharodon carcharias. By 1917 he was president of Universal By-Products Company with a capital stock of five million dollars and considered one of the pioneers in this new and prosperous industry.

In the Sept. 19, 1921, Seattle Star reported, “I got the idea while I was engaged in the fishing business in Alaska. Many sharks used to get caught on our halibut hooks, and we would take the livers and boil out the oil, and then throw the rest of the fish away. The skin was so tough that I thought it ought to make good leather. It did, and now we utilize every part of the fish. Nothing goes to waste.”

An ad seeking investors for his company in the Oct. 21, 1919, Pittsburgh Press noted, “We are manufacturers of Charadon Leather, fish oils (liver, head, flesh, refuse); meals, (hog, calf, chicken, fish) glues, gelatins, fertilizer. We also operate extensive fisheries catching halibut, herring, cod and salmon. We own a large well-equipped fleet of power boats for catching of Shark, Beluga Whale, Ray, Black Fish…We own two by-products plants on Resurrection Bay, Alaska and ten fish trap and cannery locations of forty acres each which are worth many thousands of dollars.”

In 1917 he was planning to establish a plant in St. Petersburg, Florida – but he probably faced fierce competition from the Ocean Leather Company with plants in Newark, N.J. and Fort Myers, Fla. Beside his Pittsburg and Alaska plants he did have a large facility at Edmonds, Wash. The Seward operation not only caught sharks. Lavarne advertised in the March 8, 1920, Pittsburg Daily Post that his company was, “the world’s only fishery dealing directly with the consumer. From the time the salmon are caught in Alaska until they are placed in the mail for parcel post delivery, they are handled exclusively by employees of the local company.” But during the war years, the money was in sea leather, especially from sharks.

“We have never had as yet any difficulty in getting all of the sharks that we wanted in our Alaska plant,” Lavarne is quoted in the July 28, 1917, Tampa Times, “that is, during the five and a half months of the summer time. The winter time makes it too difficult to fish outside of the bays, and even in the bays it is so rough and the wind blows so hard that I have seen the swells…run up from 15 to 100 feet height, which makes it very dangerous – in fact practically impossible for a man in a small boat…” Lavarne said he caught at least ten varieties of shark which included the blue shark; basking, pilgrim, porpoise, bone, man eater or white, great tiger, hammer-head, thresher, and mackerel. “A very large section of the shark family lives at immense depths,” Lavarne wrote. They don’t confine themselves to great depths, he noted, but apparently seek that area to breed.

In December 1916, the director of the industry division of the Bureau of Fisheries, began studying efficient methods to catch sharks. He developed a net 600 yards long, and 18 feet deep with a mesh of 36 threads. The Jan. 1920 Pacific Fisherman reported, “One-half-inch 18-thread rope makes the top and bottom lines fitted with corks 5 inches in diameter, and 4-inch trap leads interspaced with line.” Some shark fishermen tried the Bureau of Fisheries method while others stuck to their old tried and true techniques based on longlining for halibut. By 1919 the debate became heated, but Jerry Lavarne was adamant about the success of his preferred method.

Doug Capra lives in Seward with his wife, Cindy. He’s the author of The Spaces Between: Stories from the Kenai Mountains to the Kenai Fjords.