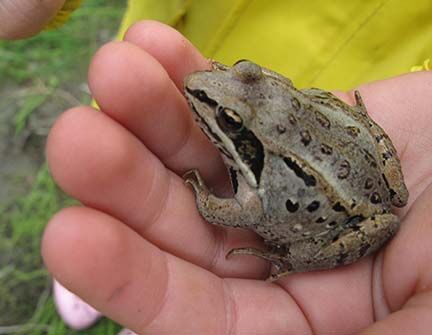 A little girl holds a wood frog, the only amphibian that lives in the middle of Alaska, near the shore of the Yukon River by Nation Bluff. 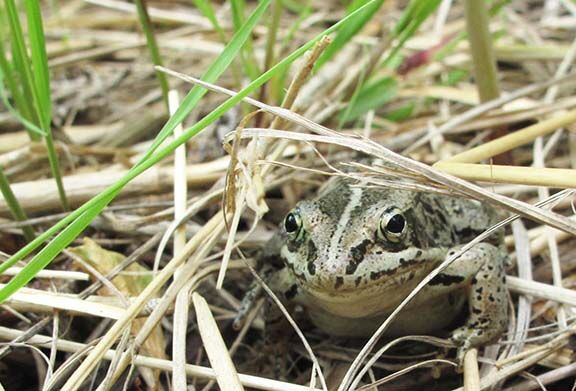 A wood frog pauses in the forest just off the Yukon River near the mouth of the Nation River.

A little girl holds a wood frog, the only amphibian that lives in the middle of Alaska, near the shore of the Yukon River by Nation Bluff.

A wood frog pauses in the forest just off the Yukon River near the mouth of the Nation River.

The palm-sized amphibians were hibernating in a box outside Brian Barnes’ Fair-banks home a few decades ago. Barnes, director of the Institute of Arctic Biology, and his students were in his living room checking a temperature gauge he recently plucked from the “frog corral.”

When he plugged the device into his computer, a graph spilled across the screen.

The temperature at frog level, under a few inches of snow and moss, had dipped to 10 degrees Fahrenheit in December.

“That guy’s toast,” Steve Trumble, a former UAF graduate student, said of the particular frog whose belly the temperature recorder had been stuck to.

No one in the room doubted Trumble’s diagnosis. According to Lower 48 and Canada wood frog studies, wood frogs could not survive temperatures less than about 20 degrees.

Barnes’ lab tests, performed on Alaska wood frogs, showed the same thing: 10 degrees is just too cold for a wood frog. If its blanket of forest litter and snow isn’t thick enough to keep it warmer than 20 degrees, it will, in theory, die.

Theory took a hit a few days later. As the frogs thawed in Barnes’ garage, they began twitching, then hopping around. All five frogs groggily woke in mid-December, per-haps wondering which way to the breeding pond.

The resurrection proved the Alaska version of wood frog is a little different from its relatives in the Lower 48.

Wood frogs, which take on the temperature of their environment, survive as far north as the Brooks Range because their bodies are able to freeze and thaw without bursting. The species ranges all the way down to Alabama.

As a wood frog’s body freezes, its liver converts glycogen to sugary glucose. All its vital systems are flooded with the sweet liquid, which helps cells resist drying. Though its cells are protected, a hibernating wood frog is frozen like a little green ice sculpture, including its heart and brain and eyeballs.

But these living ice cubes have a limit as to how cold they can get. To avoid it, wood frogs seek a snug winter nest when fall temperatures start biting.

The previous September, Barnes’ students had tracked four wood frogs with the aid of tiny transmitters glued to the frogs’ backs. When the frogs settled late in the month, the students followed them. One frog dug into loose sand next to a horse trailer. Another burrowed six inches into moss near the shore of a pond.

Three months later, the students returned to check the temperature within the frogs’ chosen wintering spots. Though the air temperature above had once fallen below minus 30, the frog in the sand by the horse trailer never got colder than 27 above. The one that chose to tunnel into the moss didn’t experience temperatures colder than 31.

The warmth of the frogs’ resting places was due to the blanketing effect of moss, leaves, and 18 inches of snow that slowed the escape of the earth’s warmth, Barnes said.

The five frogs that wintered in the corral at Barnes’ home had only a thin cover of snow because the box was under a tree and also had a bottom that insulated it from the relatively warm ground. The frogs lived to hop again after being exposed to a temperature of 10 degrees, a feat that was previously unheard of.

The surprising survival of the Fairbanks Five may be attributable to the roller-coaster ride of temperature changes endured by wild wood frogs.

In the lab, frogs perished at 18 degrees when the temperature dropped steadily. Exposure to temperatures jumping above and below freezing during fall may trigger the successful release of added glucose from a frog’s liver, Barnes said.

Since the late 1970s, the University of Alaska Fairbanks’ Geophysical Institute has provided this column in co-operation with the UAF research community. Ned Rozell ned.rozell@alaska.edu is a science writer for the Geophysical Institute. A version of this story ran in 1996.