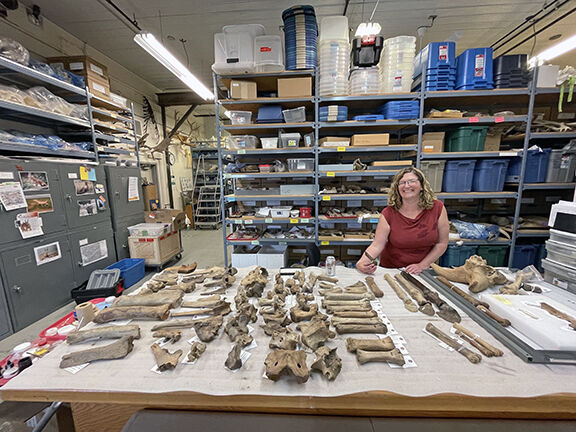 Elizabeth Hall, assistant paleontologist for the Yukon government in Whitehorse, stands in her office laboratory. 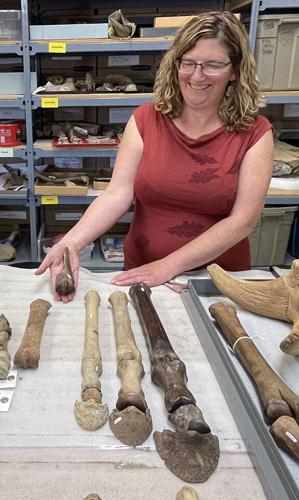 Elizabeth Hall, assistant paleontologist for the Yukon government in Whitehorse, holds in her hand a leg bone from a horse that is 765,000 years old. 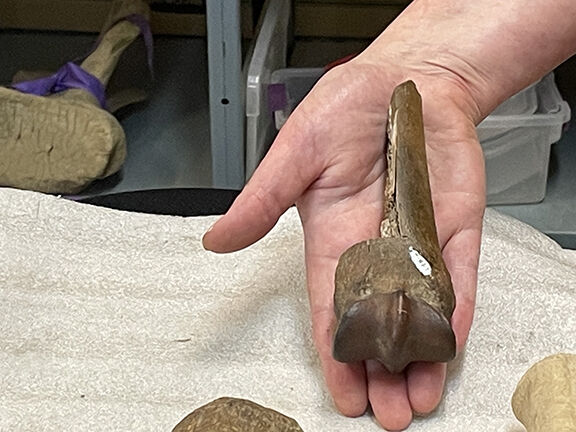 Elizabeth Hall holds the leg bone of a horse that is 765,000 years old. A paleontologist for the Yukon government, Hall helped extract the fossil from a Yukon gold mine during her first far-north field experience in 2003. 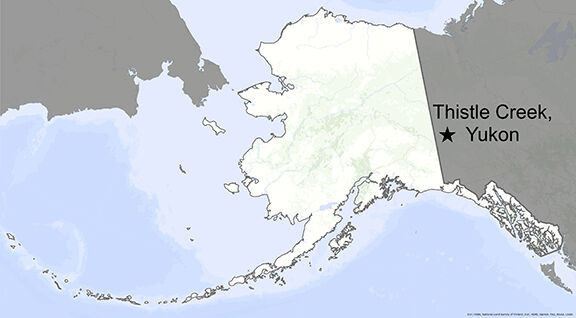 Elizabeth Hall, assistant paleontologist for the Yukon government in Whitehorse, stands in her office laboratory.

Elizabeth Hall, assistant paleontologist for the Yukon government in Whitehorse, holds in her hand a leg bone from a horse that is 765,000 years old.

Elizabeth Hall holds the leg bone of a horse that is 765,000 years old. A paleontologist for the Yukon government, Hall helped extract the fossil from a Yukon gold mine during her first far-north field experience in 2003.

A few minutes’ walk from the bank of the aquamarine upper Yukon River in northwestern Canada, thousands of bones of ancient creatures rest in boxes and on shelves.

Here in the lab of Yukon government paleontologists are the remains of saber-toothed cats, bears with boxy faces that stood 8 feet tall, woolly mammoths and sloths the size of gorillas.

Of all these time-hardened riches of the past, Elizabeth Hall has a cherished piece — the fragment of a horse’s foreleg that fits in the palm of her hand.

Hall, a paleontologist for the Yukon, has been digging up, identifying, and studying fossilized bones since her first trip to a gold mine in 2003. That’s when a geneticist on the same trip removed a bone from a cut in a hillside where it had remained in place for thousands of years.

The Yukon — a territory of Canada east of the Alaska border — is a great place to find the preserved remains of ancient creatures. One reason is that the immense ice sheet that covered most of North America (including Chicago and New York City) did not press down on central Yukon nor the middle of Alaska. That spared the landscape from the abrasion of millions of pounds of flowing ice.

The Yukon is also similar to northern Alaska in that much of the ground in which miners search for gold has remained frozen for a very long time, due to the penetrating cold air of the past.

These two features have helped the Beringian lion, the camel and a beaver the size of a person to endure in this place, even as it has changed from a windy grassland to a dense forest of spruce, aspen and willow.

This preservative environment, along with cooperative and curious gold miners, has led Yukon paleontologists including Hall to many recent discoveries, including a mummified wolf pup.

Along with the howls of that wolf’s parents, the hoofbeats of horses was a common sound here in the distant past. That’s where the story circles back to Hall.

In summer 2003, she was a student at Simon Fraser University in Vancouver when she applied for the Yukon Student Training Employment Program.

That led her to step onto a small plane on a remote airstrip a few hundred miles northwest of Whitehorse. Thistle Creek is not far from Dawson City, the epicenter of the Gold Rush in the late 1800s that drew so many prospectors to northwestern Canada. The same stampede was responsible for much of the white settling of Alaska.

On that summer day 19 years ago at Thistle Creek, Hall watched a scientist pry a rich brown bone fragment from between two lines of ash deposited by prehistoric volcanic eruptions. A researcher identified the bone as the metacarpal bone of a horse, which is sort of like one of our fingers.

The geneticist handed the bone to Hall. The hard-as-ivory fragment was still cold with the memory of being frozen in place for who-knew-how many thousands of years.

The scientists there at Thistle Creek were excited because they knew the fossil bones they had gathered that day — a few from horses and some from mammoth and mastodon — were quite old.

The researchers had to wait a long time before the picture of the horse became unusually clear.

Nine years later, a sample sawed out of the horse bone yielded the world’s oldest, most completely sequenced DNA genome.

That meant that the scientists suddenly knew that horse was munching grasses and sedge at Thistle Creek 765,000 years ago. They also knew the horse was a male that galloped the frigid grasslands alongside mastodons, camels and lions.

Hall compared extracting the exquisite DNA from the bone to finding a film of the horse’s life with no scenes missing.

“You now know everything about this one particular creature,” she said.

The Thistle Creek find helped other scientists from around the world learn more about horses, which have been around for 55 million years (compared to about 6 million for humans). For instance, that horse’s DNA led scientists to prove the existence of a stilt-legged horse that came afterward.

In early August 2022, Hall had just returned from a trip to Carmacks, north of Whitehorse, to examine a bison skull found during excavation there. She didn’t know what the next ring of the phone might bring.

As she spoke from a room surrounded by about 45,000 fossilized bones of creatures like the saiga antelope long gone from the Yukon, she held out a small fossil that was her first experience with bone-finding in the far north.