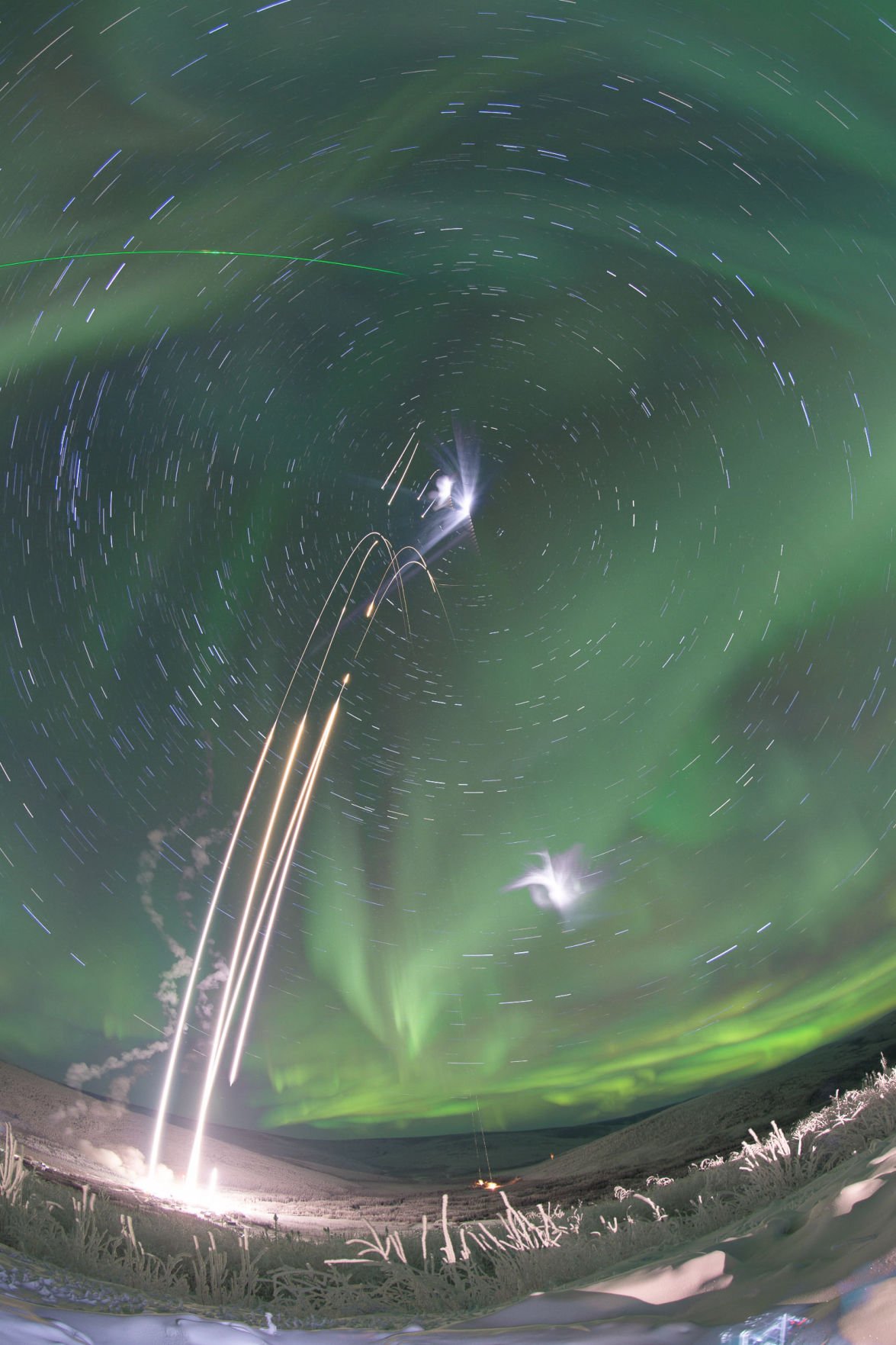 A composite image of four rockets launched from the Poker Flat Research Range in January 2015. Each image is a 30-second exposure. 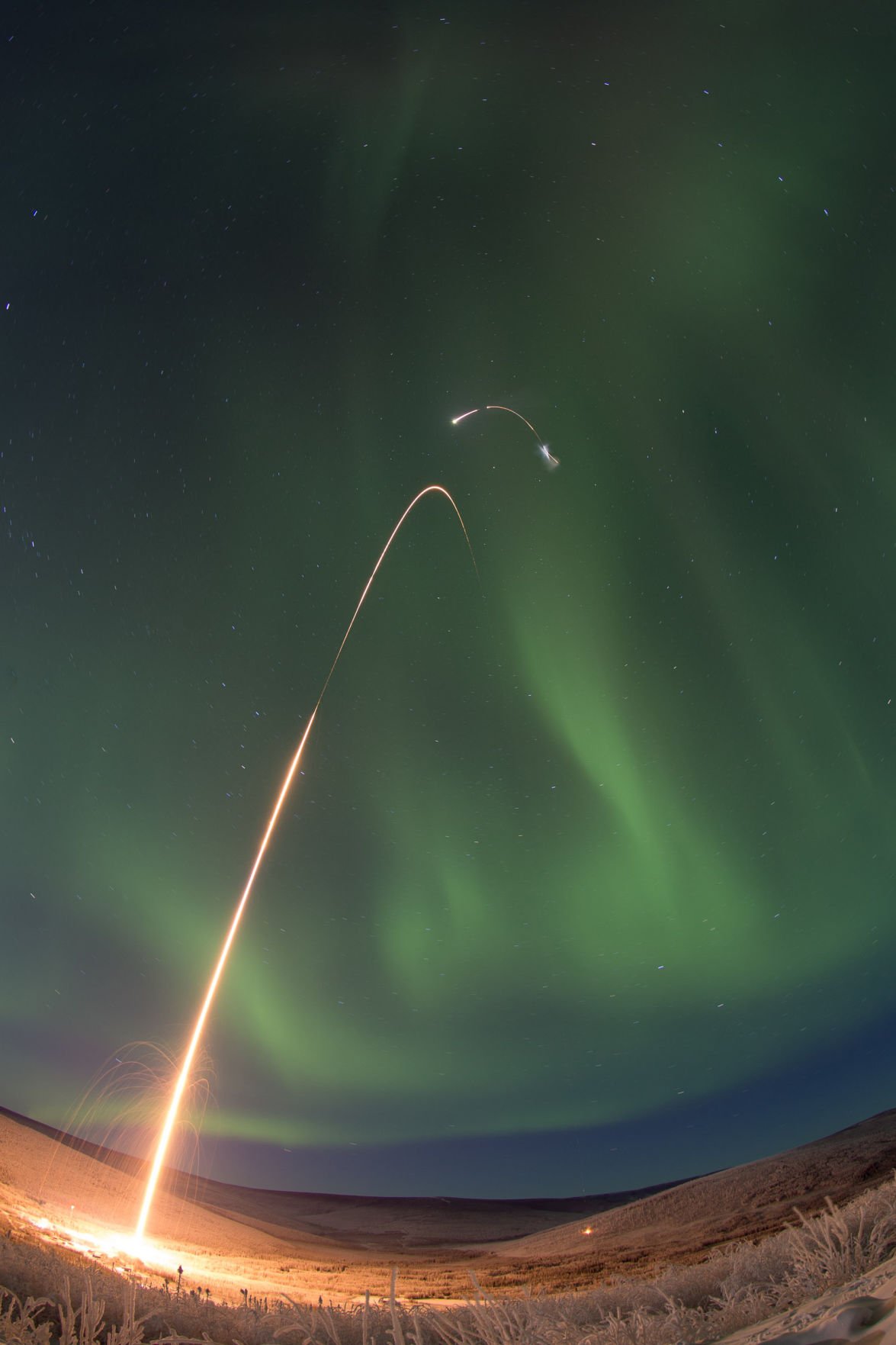 A time-lapse photo of a NASA sounding rocket taking off from Poker Flat Research Range in January, 2015. 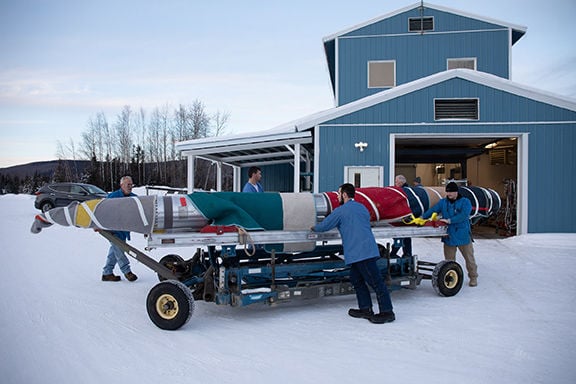 On Jan. 22, 2019, the payload portion of a NASA sounding rocket is wrapped and rolled outside in anticipation of a launch from Poker Flat Research Range north of Fairbanks.

A composite image of four rockets launched from the Poker Flat Research Range in January 2015. Each image is a 30-second exposure.

A time-lapse photo of a NASA sounding rocket taking off from Poker Flat Research Range in January, 2015.

On Jan. 22, 2019, the payload portion of a NASA sounding rocket is wrapped and rolled outside in anticipation of a launch from Poker Flat Research Range north of Fairbanks.

In cold, dry, subarctic air, a rocket taller than a house tilts northward, awaiting the moment when a person inside a nearby concrete building pushes a button.

The ink-black Chatanika River valley will then flash white, and erupt with a clap of thunder. A slender NASA vehicle will shoot skyward, carrying a sensitive instrument in an arc 160 miles above northern Alaska.

The detector will lock on a distant star, and determine what the gases in our atmosphere are filtering out. This will tell scientists something about nitric oxide, which sometimes penetrates lower levels of Earth’s atmosphere, destroying ozone molecules.

The launch window for this year’s winter experiment at Poker Flat Research Range 30 miles north of Fairbanks opens Sunday, Jan. 26, at 4 a.m. Alaska time. The launch window will remain open until Feb. 8, 2020, for a little more than an hour each day. As with the last few launches from Poker Flat, a livestream will be available on YouTube.

Those living within a 100-mile radius of the Chatanika River valley will be able to bundle up, step outside and eyeball the 343rd sounding rocket to launch from Poker Flat since the late 1960s.

“If skies are clear, you can see this rocket from anywhere in the (Fairbanks North Star) borough,” said Robbie Herrick, a planetary scientist with the Geophysical Institute at the University of Alaska Fairbanks.

Researchers and staffers from the Geophysical Institute have operated Poker Flat Research Range since 1969, when the late space physicist Neil Davis willed the 5,132-acre facility into existence from the boreal forest with funding from the U.S. government and materials scavenged from nearby Davidson Ditch, among many other sources.

The Department of Defense sponsored many of the early Poker Flat launches to learn more about the ionosphere — the partially charged air from about 50 to 600 miles over our heads — and how nuclear warfare might affect it.

Since 1996, NASA has sponsored almost all of the rockets launched from Poker Flat. On most of those missions, researchers have tried to find out more about basic properties of the aurora and the nature of the space where it exists.

During this launch, locals will see an ascending pinpoint of light that is the first rocket stage blasting off from Poker Flat, and then hear the lagging sound waves deliver the boom. The light will disappear for a few seconds as the solid fuel from the first rocket stage is depleted and the motor falls to the ground in northern Alaska. Another light will then appear far overhead as the second stage of the Black Brant rocket fires, carrying an ultraviolet spectrograph 160 miles above northern Alaska. From that apogee — the top of the rocket’s arc — the instrument will measure nitric oxide levels.

Nitric oxide penetrates the lower atmosphere during some, but not all, polar winters. Scott Bailey of Virginia Tech, a veteran of several Poker Flat campaigns, is one of the lead scientists for the experiment, and wants to find out why.

Aurora borealis creates nitric oxide, but in the dark polar night there is no sunlight to destroy it, so it can build up in large concentrations. Bailey and his colleagues will measure it during the rocket flight, which will last less than 15 minutes from takeoff until both stages fall to the frozen surface of northern Alaska. Technicians from Poker Flat will recover the rocket stages by helicopter after the experiment.

To receive updates about this launch, text PFRRLAUNCHES to 33222. Starting in the wee hours of Sunday morning, staff members will send text alerts when conditions are looking favorable for a launch. A clear sky over middle and northern Alaska is ideal.

For those wanting to see the launch live from somewhere in Interior Alaska, Herrick notes that the YouTube feed can be delayed by up to 30 seconds.

“If the text alerts you that the count has gone below 2 minutes, it’s almost certainly going to launch,” he said. “You’d better go outside then and look in the direction of Chatanika.”