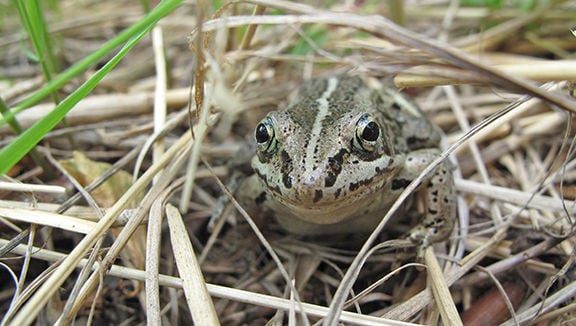 A wood frog, now freezing in a bog near you 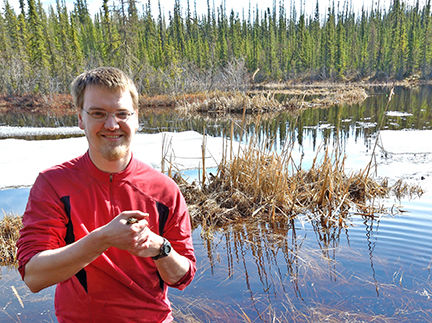 UAF doctoral student Don Larson with a wood frog he captured in Ballaine Lake on the university campus in Fairbanks.

A wood frog, now freezing in a bog near you

UAF doctoral student Don Larson with a wood frog he captured in Ballaine Lake on the university campus in Fairbanks.

Their bodies cooling with the October air, wood frogs are now snug in leafy blankets all over Alaska.

Down there inside those thumb-size frogs, even smaller creatures are hitching a ride. These tiny parasites have the power to make frogs develop up to a dozen extra legs, or no legs at all.

Don Larson just defended his University of Alaska Ph.D. thesis on the fate of wood frogs that are at this moment becoming camouflage ice cubes. While taking a course in physiology of northern creatures, he became fascinated with the parasites attached to some wood frogs. How could a creature that leeches off another organism endure that animal freezing solid?

Wood frogs, which exist from the Brooks Range all the way south to Georgia, are the only amphibians in northern Alaska. Larson’s advisor Brian Barnes years ago found that the Alaska version of the wood frog is special, able to tolerate frigid temperatures under the snow that would kill Lower 48 wood frogs.

They do it by becoming sweet.

Right now, frogs are freezing and thawing with the daily swings of air temperature. Larson found that with each nip of frost, frogs’ livers produce more glucose. That glucose floods their bodies, helping them avoid the cell dehydration that happens when we get frostbite.

Alaska wood frogs are fine out there, even though their brains and eyes and legs will soon be frozen solid.

“This animal has no heartbeat,” Larson said. “In a lot of ways, it’s not a living organism.”

After a half year in the living-dead stage, wood frogs thaw in springtime and hop away to a nearby breeding pond as if nothing happened.

During his research, Larson collected 18 wood frogs in Fairbanks and fit them with tiny glue-on transmitters. He then let them go and tracked them to crevices on the forest floor where they stopped moving in fall. For two years, he checked the temperatures where they hibernated, finding that even when Fairbanks air dropped to minus 40 F, the frog-level temperature under a cushion of snow was still above zero.

Larson loves frogs, but he was even more interested in a parasite that lives part of its life in Alaska ponds and lakes. Ribeiroia ondatrae is — for part of its life — an oversized head with a whip tail. In ponds and lakes and puddles, it torpedoes into tadpoles, embedding itself near where a frog’s legs will emerge. Sometimes, a developing frog will react to the irritant by growing extra legs.

Why would a parasite do that to the animal upon which it depends?

“They want to create a zombie,” Larson said. “This parasite wants this frog to be eaten.”

Ribeiroia ondatrae needs three other animals to complete its life cycle. It first requires a bird like a sandhill crane to eat an infected frog, which maybe is not moving well with those extra legs. Then it needs the crane to poop out adult parasites into water, which produce eggs that hatch into little blobs.

Snails eat those blobs. Within snails, the parasites multiply like crazy, then depart as tadpole-seeking missiles, entering them through the anus or gills.

Why would anything evolve to rely on three other organisms?

“It's like living with mom and dad well after high school,” Larson said. “The food, housing, and transport are all taken care of for parasites. They only need to expend energy to avoid the host’s immune system, and reproduce.”

Though Larson did not find a deformed frog in Fairbanks, he found that the parasites can survive in overwintering wood frogs. He thinks the parasites endure winter by “hijacking” a frog’s glucose strategy. He wonders, if the air keeps warming, if the parasites will take that as an advantage, leading to more greenish zombies skittering through Alaska wetlands.