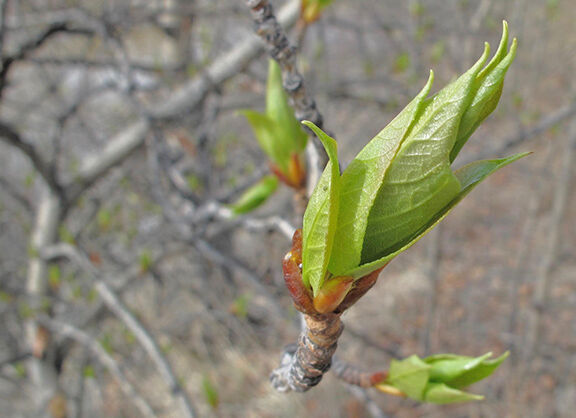 In Ferry, Alaska, a balsam poplar leaf emerges from a bud in May. 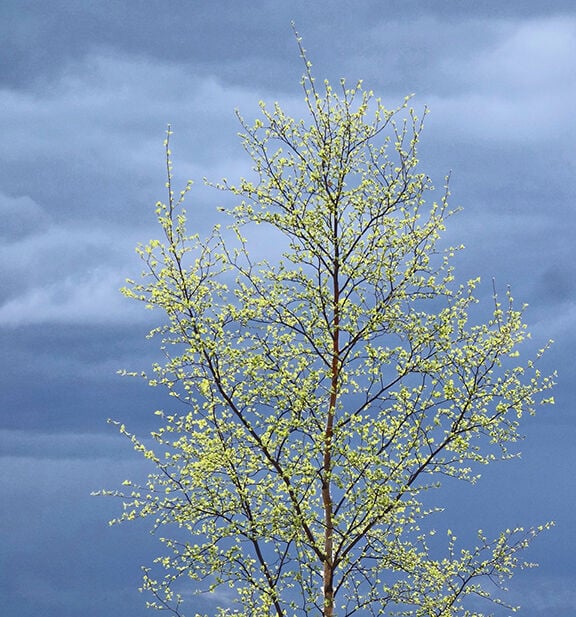 “Greenup” happens in Interior Alaska when leaves unfold after a long winter, as is happening on this birch tree.

In Ferry, Alaska, a balsam poplar leaf emerges from a bud in May.

“Greenup” happens in Interior Alaska when leaves unfold after a long winter, as is happening on this birch tree.

Greenup — the great, silent collective explosion of freed tree buds that had been frozen all winter like a clenched fist — will happen any day now in much of Alaska. The phenomenon is easy to notice here in middle Alaska, which is locked up in black-and-white for much of the year.

The late Jim Anderson described greenup as when “leaf buds in birch and aspen open just enough to produce a faint, but distinct green flush through the forest canopy.”

Anderson was a librarian on the West Ridge of the University of Alaska Fairbanks campus who chronicled the event beginning in 1974 until his death in 2007.

Anderson, who found his hobby was also an interesting way to measure short-term climate change, noticed the greenup date fluctuate over time by about a month, with a slight trend toward earlier greenups.

The earliest Fairbanks greenup he measured was in 1993, when the hills changed on April 30. The latest greenup occurred on May 25, 1992, when the average temperature for the month was 41.8 Fahrenheit degrees, more than six degrees colder than normal.

The new neon-bright leaves increase humidity a bit as they complete a pathway in which deciduous trees pull water from the ground and emit water vapor.

Jim Anderson pointed out another consequence of greenup — a rise in the amount of pollen in the air. He measured pollen concentrations in the air with a device mounted on top of the building that houses the library in which he worked. Anderson, who did not suffer from allergies, created charts for people who did. Birch pollen gives people the most problems, followed to a much lesser degree by alder and willow.

Grains of tree pollen are small enough that eight of them would fit on the period at the end of this sentence. The air is heavy with these dots because trees engage in their hit-and-miss mating in springtime.

The first step in a tree’s reproductive mission is to release sperm, held in the center of a pollen grain. Trees release a staggering amount of pollen to improve the odds of finding a female flower. One birch catkin (the cluster of tiny flowers that looks like a caterpillar) can release millions of pollen grains.

Allergy sufferers are hit hardest by birch pollen because it contains irritating proteins. Each grain of pollen consists of a center containing the male genetic material, surrounded by a protective wall called the exine.

When pollen comes in contact with moisture, such as that on the nose's mucous membranes or the lining of the eyelid, protein molecules from the exine leach into a person’s tissues. An allergic person's immune system produces antibodies against the protein molecules. Antibodies then trigger the release of histamines and other potent substances, leading to cold-like symptoms.

Anderson discovered that, in the Fairbanks area, poplar and aspen release pollen first. Birch, alder, spruce and grasses follow. According to pollen calendars Anderson made for Fairbanks and Anchorage, birch trees typically shed the largest amounts of pollen May 10 through May 20, and then they are done for another year.